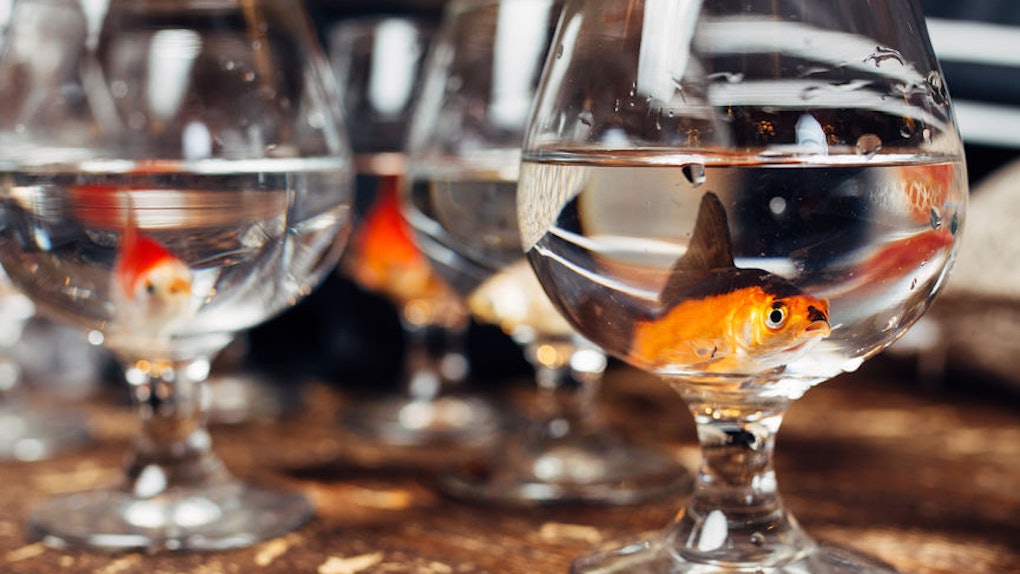 Weddings can often be really stressful for the people running the show. Obviously, the bride can only handle so much before she starts delegating tasks to her maid of honor, and on the big day, she most likely just wants to relax and enjoy. It might not sound like much at first, but before long, a maid of honor might find herself serving as security detail for the wedding or cutting off certain uncles from the open bar. But this Reddit thread about a maid of honor picking up goldfish after a wedding definitely takes the prize for "Most Ridiculous Request Of All Time."

No, your contacts didn't fall out. You read that correctly. A maid of honor was forced to clean up dead fish after a wedding because the bride had an idea that probably shouldn't have ever come to fruition.

According to a recent post on Reddit titled, "Living creatures as wedding favors," the maid of honor who wrote the post was given "floater duty" during the reception. If that sounds strange, that's because it is. The maid of honor recounted the tale of how the bride — a huge animal lover and advocate — wanted to use goldfish as centerpieces at her wedding in the hopes that guests would adopt them. When they didn't, and the fish died, it was the maid of honor who had the privilege of picking them up, also known as "floater duty."

Sounds fun, right? Not really. According to the post,

Ex-friend was an animal lover. On and off again vegetarian/vegan, PETA supporter, etc. She was especially fond of fish. With that in mind, how cute would it be to have a pair of goldfish in a globe as a centerpiece? Real, live goldfish — a pair of them (to represent the couple, see?) — on each and every table, all 40 of them.

While the maid of honor tried hard to convince the bride that it wasn't really all that practical to have living fish on each table, the bride was adamant that it would be perfect. Of course, it's always nice when weddings have a personal touch or two, but logistics should also be taken into consideration. Really, how can anyone know if their guests will want to take home a fish from a wedding? There are plenty of stories out there about brides having ridiculous demands for their weddings, but this story is on a whole new level.

Because it's not just the fact that the bride wouldn't listen to her maid of honor, it's that she then expected said maid of honor to take care of all the fish at the end of the night. Per the Reddit post, the maid of honor was left responsible for about 90 goldfish. But at least she handled it well?

End of reception, everyone's gone home and the wedding hall hosts are cleaning up. "What does the bride want us to do with these". "These"? Oh yes, the eighty goldfish left behind with all the spent streamers and confetti. The venue needs their globes back. Isn't it strange how not a single guest was willing to take home some goldfish? It couldn't have helped that the bride didn't think to provide containers for them. So, will the bride and groom be adopting these eighty goldfish plus about ten "spare" still in the back swimming around in the giant bag from the pet store? Alas, they can't! They're headed off on their honeymoon. Such a shame. "Gotta go now, bye!"

With that, they were gone. Now I was literally the only person from the wedding left in the building. The hosts still needed their globes back.

That night I strolled into a big-box pet store in my big floofy red satin floor length gown, heels clacking on the tiles, and purchased a big-ass rectangular tank, a filter, and some fish flakes. A few were dead by the time I got home, then more the next morning. More again in the afternoon, and the evening, and the next morning. By the third day, we were down to five, and we lost one a day after that until there was only one left. And that last one? Five years. I named it Sun. It lingered far longer than my friendship with the bride, and far far longer than her marriage.

Well, if the world learns one thing from this horror story, let it be this: You cannot guarantee that a guest will want to leave a wedding with a fish in hand.

JK! In all seriousness, it's important to keep things practical at a wedding, so that guests like this maid of honor don't have to babysit 90 goldfish. Flowers make beautiful centerpieces and no one has to babysit them at the end of the night!

More like this
Zac Clark & Tayshia Adams Are Wedding Planning & I’m So Pumped
By Lydia Wang
When Are Ariana Grande & Dalton Gomez Getting Married? Here's The Reported Tea
By Corinne Sullivan
25 Instagram Captions For Your First Post-Vaccine Date
By Corinne Sullivan
Stay up to date