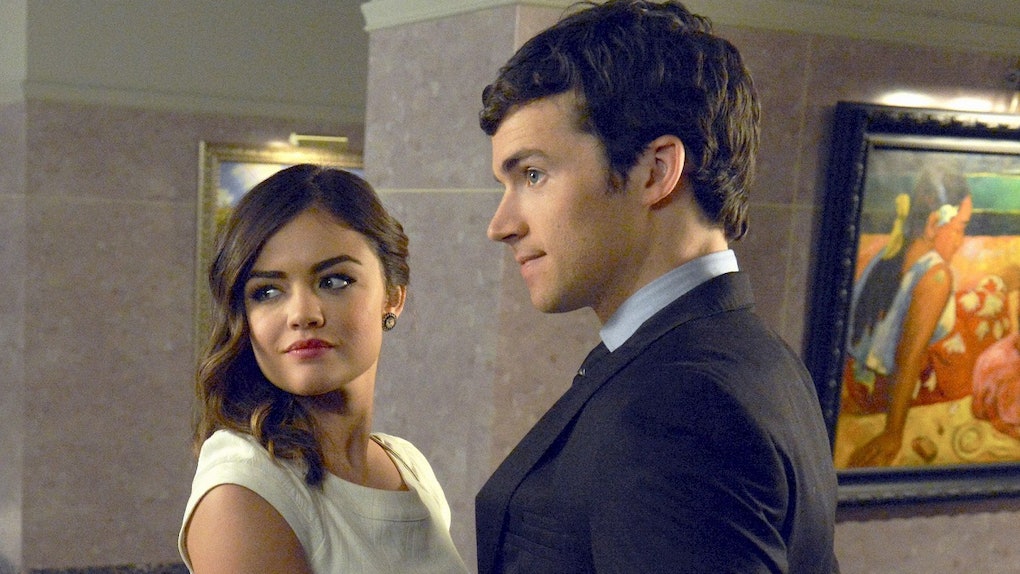 Pretty Little Liars' Alison is all grown up on spinoff series The Perfectionists, but she and new Beacon Heights University co-worker Mona are still keeping up with their Rosewood roots and the Liars they left behind. This week's Perfectionists episode ended with Mona calling Hanna and getting the dirt on Spencer and Toby's elopement, but they're not the only ones with big news. The franchise's Twitter account spilled about another Liar's current life, and this Pretty Little Liars update on Ezra and Aria is perfect.

ICYMI, the Pretty Little Liars series finale concluded with newlyweds Aria (Lucy Hale) and Ezra (Ian Harding) heading off to their honeymoon. Similarly to the majority of the longtime Pretty Little Liars relationships, the two tied the knot after dancing around each other for years. It's a little icky to remember, but Ezria had their start with a make-out at the bar before learning that Ezra was Aria's new English teacher. This ship was definitely allowed to take its time before it fully sailed.

Nearly two years after the wedding, fans didn't have a definite idea of how married life has treated Aria and Ezra. However, the first two weeks of Pretty Little Liars: The Perfectionists quickly shone light on how Alison (Sasha Pieterse) and Mona's (Janel Parrish) friends are doing back in their hometown.

While the lack of trust in Alison's relationship with Emily (Shay Mitchell) contributed to her decision to teach at BHU, Mona's phone call with an unheard Hanna (Ashley Benson) revealed that Hanna and Caleb (Tyler Blackburn) have welcomed their first child. Hanna also revealed that Spencer (Troian Bellisario) and Toby (Keegan Allen) eloped without telling anyone else. On a darker note, the fact that the Drakes seemingly escaped Mona's clutches in Paris is still keeping PLL fans on their toes.

Alison and Mona have yet to welcome any of their old friends to BHU, but just so all of the Liars' bases are covered, the Pretty Little Liars Twitter account released a video of a text exchange between Alison and Aria. In it, Aria tells Alison that she and Ezra have named their first daughter Katherine Ella and that her book Park Avenue is being made into a movie that real-life adaptation queen Reese Witherspoon is overseeing.

Equipped with the nice thought of the baby's middle name honoring Aria's mom, the conversation also revealed that Aria is inviting all of the Liars to her movie adaptation's New York premiere. Considering Witherspoon's busy schedule and actual Perfectionists logistics, we probably won't see this group reunion onscreen, but fans can dream. Going forward, we may be limited to brief texts and phone calls from Alison and Mona's friends, but the reassurance that the women have kept in touch is sweet.

As for when a Perfectionists cameo from other original PLL characters could actually happen, showrunner I. Marlene King has clarified that she wants to establish a new story before bringing back familiar faces. She told The Wrap:

There’s quite a few people who’ve expressed interest in coming on. But for the first season, I felt it was really important to launch the show on its own and let it stand on its own two feet, so it’s not really about those appearances. But I think next season we’ll be a lot more open to having some of those OGs and those fun moments.

Here's hoping that the ladies visit Alison and Mona with babies and partners in tow if they stop by BHU. Season 1 of Pretty Little Liars: The Perfectionists continues on Wednesday, April 3, at 8 p.m. ET on Freeform.