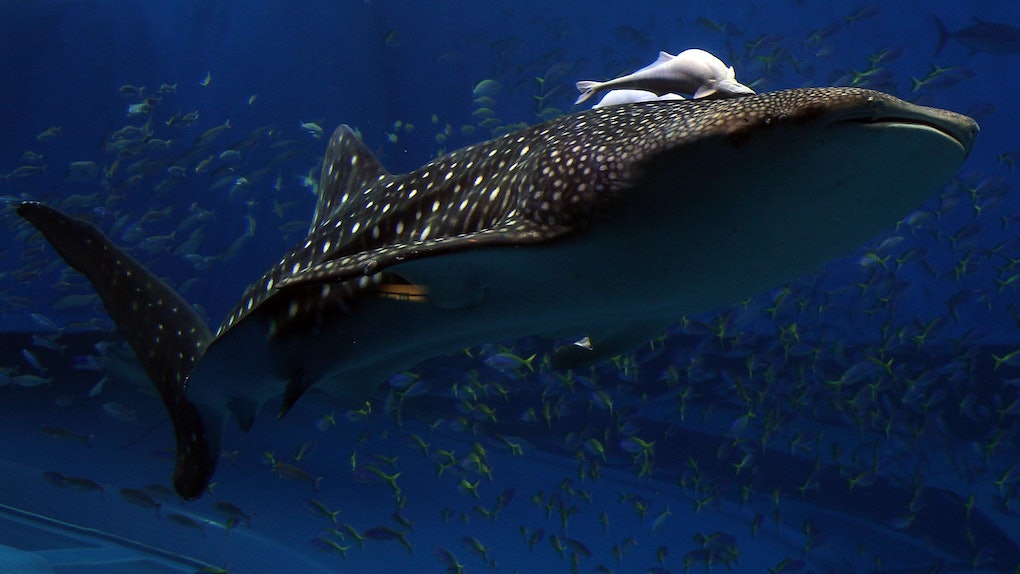 This Prehistoric Shark With 300 Teeth Is Seriously Our Worst Nightmare

For a brief period of time in my adolescent life, I wanted to become a marine biologist. I don't exactly know why, other than I loved taking trips to the beach in the summer and enjoyed aquariums more than the average kid does. Well thank God I didn't follow through with that career aspiration, because you could not pay me to deal with this weird prehistoric snake-shark that was seen chilling off the coast of Portugal.

Let me preface this by saying I love sharks. I think they're truly one of the most magnificent creatures that exist. I'm the kind of person who marks the Discovery Channel's Shark Week in my calendar un-ironically. But this species of shark, which has existed for more than 80 million years, is one that I do not want to see in any capacity.

It's called the frilled shark, and according to Newsweek, this fish is so old that it's considered a "living fossil." This summer, a frilled shark was spotted living its best life off the Algarve coast by Portugal. Typically, this species of shark can be found between 390 and 4,200 feet below the surface of the ocean, which is why it's almost never spotted. In fact, the species wasn't discovered until the 19th century for this very reason.

But now we have one of these creatures bopping about, and I pray that these suckers don't all start coming out of the woodwork, because I'll never go swimming in the ocean again. I mean, look at this thing:

Honestly, just looking at this image makes me physically ill. The prehistoric creature has an eel-like body that can grow up to six feet in length, with a head shaped like a snake and teeth like you wouldn't imagine. The creature's 300 chompers are curiously organized into 25 rows that go around the perimeter of the jaw. The shark's diet is primarily made up of squid and octopus, and it captures its prey by lunging forward suddenly, much like a snake would. It's disgusting.

The sighting is yet another reminder of how little we know about ocean life and what could exist in the depths that humankind hasn't yet explored. And while it's exciting that this was such a rare sighting, if this is the type of creature living in the deepest depths of the ocean, I don't want to know what else is down there. This frilled shark looks like something straight out of Rock Bottom, and that episode of Spongebob legitimately scared me as a child. Did this thing come from the oceanic equivalent of the Upside Down? What is it doing on the human side of the ocean? Does it want something? I have so many questions.

And it seems that I'm not alone in feeling this way. Twitter users are just as disturbed as I am:

Look — I'm all for research and discoveries that will help better understand our earth's history. I think it's amazing that there is a species of shark that's managed to survive millions of years, because it basically proves that dinosaurs still exist to some degree. But I don't think I'll be able to un-see this frilled shark and I'm pretty upset about it. I'm not a fan of snakes at all, much less an aquatic snake that can grow to be as tall as your average male adult. So the thought of this creature existing makes me uncomfortable to say the least.

Hopefully these sharks (if more of them are out there) will stay down in what I'm now going to refer to as the "oceanic Upside Down," and I can continue to enjoy my beaches in peace.