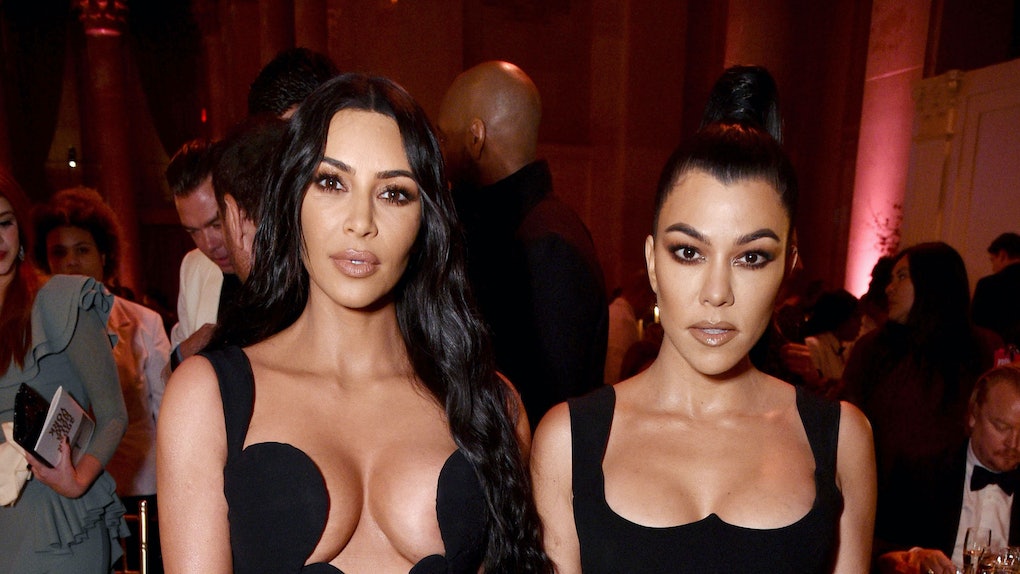 OK, whoa. I've always thought all of the Kardashian/Jenners look alike, but this is next level. There's a photo of Kourtney Kardashian wearing a Kim mask and it feels like the Matrix split open. (I never saw the movie. Is that how the Matrix works?) The mask came courtesy of Kim in her new sunglass collaboration press box, and of course, Kourtney had to document it. Presumably, this was part of the idea behind Kim's packaging, but the effect is more, IDK... creepy than anything else. But hey, all PR is good PR and no one knows that more than this family.

Kim collaborated with Carolina Lemke sunglasses to sell some specific futuristic looking sunnies. As part of the campaign, Kim cloned herself for various ads and obviously offered up her million dollar face to create the mask mold. The collaboration line launched on Tuesday, Aug. 2, which means plenty of Kim's celebrity friends received press kits from their main girl. Each kit included three Kim masks all rocking different styles of shades. Throughout the week, Kim shared plenty of her friends' unboxing videos, which was fun, because plenty of famous people tried on the cool sunglasses. However, Kourtney took it a step further.

Rather than trying on each pair of glasses individually, Kourtney tried on each mask individually. Look at this sh*t:

UH, OK. I can't tell if this is my nightmare or my fantasy.

For reference, here is what the full box looked like when sister Kylie Jenner opened it up:

It's kind of overwhelming, right? I have so many questions. Why didn't they put makeup and contour on the masks like Kim does all of the time to her real face? Are the masks proportionally accurate? Can I buy one on eBay yet for Halloween (the masks, not the sunglasses)?

According to Kim, what started out as six sunglasses designs quickly turned into 20. At the Carolina Lemke launch event, Kim spoke with Entertainment Tonight about how it all came to be. "I like to change up my look all the time," she said.

So to have so many options. When we were starting this collab, we initially went into this saying we were going to do six styles, and I think we have seven for the first drop. And then we cut it into two drops. We have over 20 styles we're going to be launching before summer. And I got so into it that I just, I couldn't choose. I had to have more styles. And because they are affordable, you can mix it up more.

For those of you looking to cop Kim's look, you can purchase the sunglasses for under $100. I assume buying her face is a little more expensive.

Meanwhile, big sis Kourtney is busy launching her own lifestyle brand, Poosh, which also came with its own press kit. Kim shared a video of herself unboxing Poosh's stuff and it was admittedly a little less shocking, but still packed full of glamorous stuff.

Look, it's not a competition, sisters. But if it was, Kris Jenner wins, obviously.