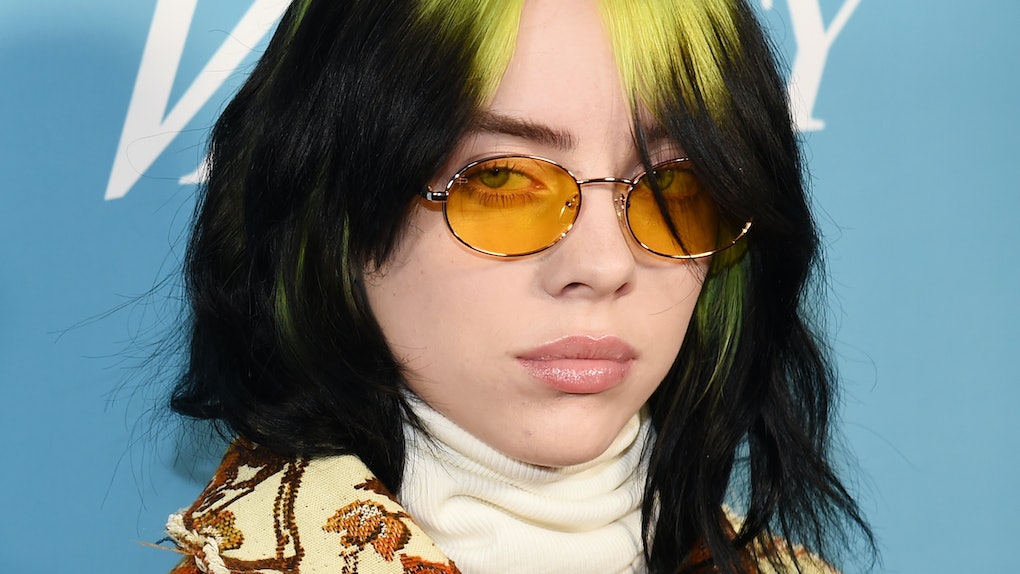 Talk about things coming full circle. By now, you've definitely heard Billie Eilish's "Ocean Eyes," and, you've also probably heard the hundreds of gorgeous covers flooding the internet. Well, one of those covers was by none other than Alicia Keys, who, apparently, was one of Eilish's childhood idols. You see, back in the day, before "Ocean Eyes" went viral, Eilish played one of Keys' songs at her school's talent show. Just wild. An old video of Billie Eilish covering Alicia Keys' "Fallin" has hit the internet, and it's a must-see for fans of both singers.

The big reveal happened on The Late Late Show With James Corden, where both Eilish and Keys were making a joint appearance. The two musicians used the talk show to declare their admiration for each other, but then, Eilish revealed she had a surprise for Keys.

"A year before 'Ocean Eyes' came out, which you covered, which is crazy, I did a cover of 'Fallin' at a talent show, at 12," Eilish said before then rolling the clip.

Needless to say, Keys' reaction was priceless. After giving an audible gasp, Keys told Eilish her throwback cover was "amazing."

"See? I got one for you and you got one for me," Keys said as she grabbed Eilish's hand. "That's so fire. Look at you."

As further proof she's a supportive queen, Keys went on to congratulate Eilish on her 2020 Grammy nominations.

"Huge congrats to you...six Grammy nominations including Best New Artist, Record, Song, and Album of the Year all at once. Like, your first time attending the Grammys!" she said.

Also on The Late Late Show that night was Ali Wong, and the video of all three ladies backstage has friendship goals written all over it.

By the end of the show, Keys and Eilish sat down for a rendition of "Ocean Eyes" together and it was a whole mood.

The most important part of the show? When Keys turned to Eilish and remarked: "We're gonna do the next one soon." Umm, did Keys just confirm a collab with Eilish is coming? Keys is hosting the 2020 Grammys where Eilish is nominated for all those awards, so, like... make it happen, ladies.

TBD on that, but, for now, this heartwarming moment between Eilish and Keys is enough to hold me over.

More like this
This Video Of Wonho Answering Trivia Questions About Himself Is Required Viewing – EXCLUSIVE
By Brandy Robidoux
Billie Eilish's 'Happier Than Ever': Release Date, Tracklist, Cover Art, & More Details
By Michele Mendez
Who Is Billie Eilish's "Your Power" About? The Lyrics Call Out A Manipulative Ex
By Sydney N. Sweeney and Brandy Robidoux
Stay up to date