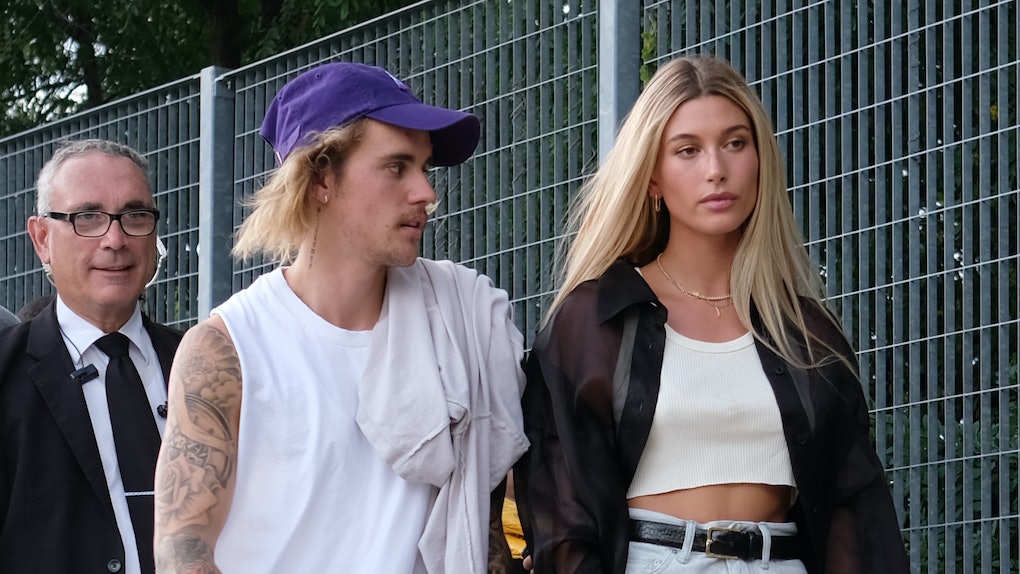 If you recall, Bieber and Baldwin became a thing in June 2018. They then secretly wed at a courthouse in September 2018, according to TMZ. From that point on, rumors swirled regarding a public display of their nuptials, because think about that guest list. It's about to be on and poppin' with models, rappers, and basically A-listers from every facet of the entertainment industry. I want to see that.

Bieber and Baldwin reportedly attempted to coordinate a formal wedding celebration not once or twice, but three times and, well, failed. Elite Daily reached out to Bieber and Baldwin's teams for comment on the report, but did not hear back by the time of publication.

TMZ's source said the young couple's third plan was to include about 300 guests, including Kylie Jenner and Travis Scott, Chris Brown, Drake, and Odell Beckham Jr. (Like I said, I want to see that). Celeb guests and family members were reportedly sent "save the dates," but the wedding was postponed after some of Bieber's people couldn't make it to the Los Angeles affair scheduled to coincide with Bieber's birthday in March.

Now, TMZ's got the update and they are saying the formal union is much closer than you think. In fact, their source reports Bieber and Baldwin are "eyeing a date in September" for close friends and family to watch them tie the knot. And what do y'know, Bieber and Baldwin's secret courthouse marriage reportedly took place on Sept. 13, 2018. Awww, that means their wedding day and wedding party would share the same day. I also checked the date of Sept. 13, 2019, on a calendar (because I want to make sure I have the day free in the small and very unlikely chance I'm invited) and it falls on a Friday. Totally doable — the wedding and my attendance. I just hope they aren't superstitious. Elite Daily reached out to Bieber and Baldwin's teams for confirmation, but did not hear back by the time of publication.

Honestly, I wouldn't be surprised if Bieber and Baldwin got hitched in the next few weeks. They both look truly happy. Plus, Bieber's Instagram posts are at an all-time lovey-dovey high. He's openly called Bieber "chicka," "wifey," and my personal favorite "goo goo," but nothing compares to this: "the greatest thing that has ever happened to me."

In an Aug. 15 Instagram post, Bieber gushed about his wife and I'm tearing up. The singer wrote: "I fall more in love with you every single day. You are the greatest thing that has ever happened to me. I would be lost with out you. #wifeyappreciationday." Aww...

I really don't think that hashtag is today, but I'm going to let Bieber have this one because Jailey makes me "belieb" in love again. Happy (Pending) Nuptials!