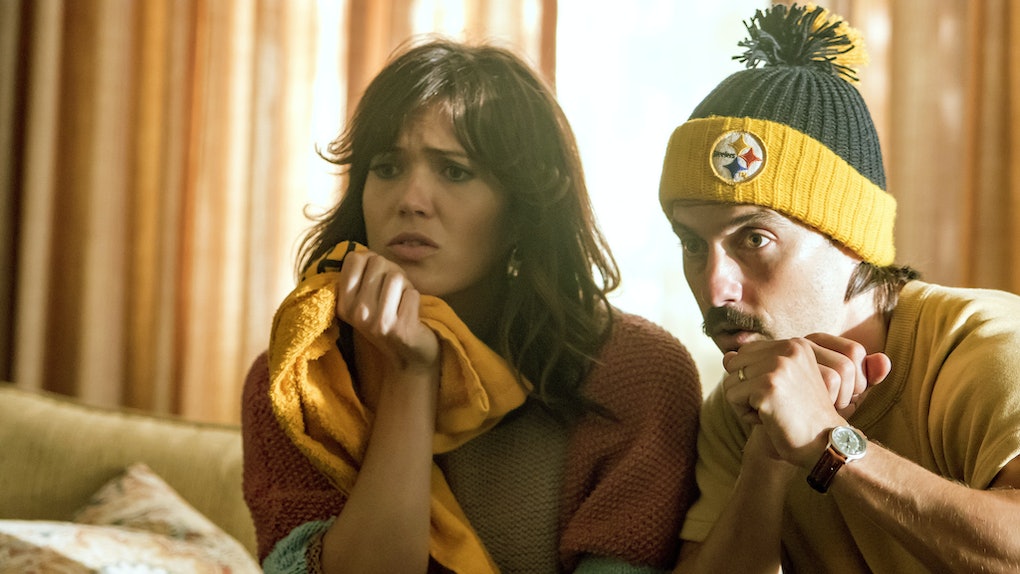 'This Is Us' Is On After The Super Bowl, So Non-Sports Fans Have A Reason To Watch

It's the divisional rounds of the NFL playoffs this coming weekend, with eight teams competing to try and get to this year's Super Bowl Sunday, held on Sunday, Feb. 4 on NBC. On the NFC side, it's Atlanta vs. Philly and Tennessee vs. New England. On the AFC side, it's New Orleans vs. Minnesota and Jacksonville vs. Pittsburgh. But what if you don't care for sportsball? Why you should tune in, other than a few lame commercials you can watch on YouTube, anyway? If you're into weepfests, you're in luck, because NBC is airing This Is Us after the Super Bowl this year. After the game, everyone can have a good cry.

There are a lot of reasons NBC is putting This Is Us after the game, and it's not just so that the sports fans of the losing team can have a cathartic experience. The show is NBC's biggest hit since in year, and their biggest serialized drama to gain any sort of critical respect since Parenthood went off the air in 2015. (Sorry, Chicago Fire.)

With all eyes already on the channel at Super Bowl parties everywhere, sticking This Is Us after the game guarantees that folks who have heard the fuss and are too lazy to change the channel anyway might stick around and get hooked on the Emmy and Golden Globe-nominated soap.

But that's not the only reason. The show is also thematically appropriate to air after the Super Bowl because the Pearson clan is a football loving family. Jack was a hardcore Steelers fan. (The show is set in Pittsburgh.) Kevin was a high school starting quarterback. Kate watches Steelers games with her dad's urn on the regular.

Football is a major part of the flashback potions of the show. (I've christened those parts This Was Us.) With the series knowing since before Season 2 started filming that they were going to get the post-Super Bowl slot this February, we can assume that the episode that falls here will reference at least one of the years the Steelers went to the big game — maybe even one where Jack was still alive to see it.

The show has already made quite a bit of the Steelers back-to-back year wins of 1979 and 1980, before the triplets were born. But considering where we are in the flashback memory universe, which has focused on the teenage kid years just before their father died, the show could instead do 1996, when the Steelers went to the game but lost.

Whatever the show chooses to focus on, it won't be a standalone episode. The idea is to draw those who check it out in to binge watch the earlier episodes and tune in going forward. So, though we should expect an episode accessible enough for someone who doesn't know the story, the production has promised that this episode will still further the continuing plots.

(And hey, if the Pittsburgh Steelers actually magically go to the Super Bowl this year, that's just massive bonus points.)

But for fans of the show, a new episode isn't all we're getting. After the Super Bowl and the new This Is Us episode is over, NBC has promised they'll keep the party going.

It was announced at the TCAs this week that a special episode of The Tonight Show Starring Jimmy Fallon will air after This Is Us. Fallon's guest list features guest appearances by The Rock, halftime show star Justin Timberlake, as well as the entire This Is Us main cast.

Dwayne Johnson, Justin Timberlake, and stars of This Is Us are set to appear on the special post-Super Bowl episode of NBC’s The Tonight Show Starring Jimmy Fallon. The Tonight Show will originate from Minneapolis’ Orpheum Theatre ... The core This Is Us ensemble of Sterling K. Brown, Mandy Moore, Milo Ventimiglia, Chrissy Metz, and Justin Hartley will guest.