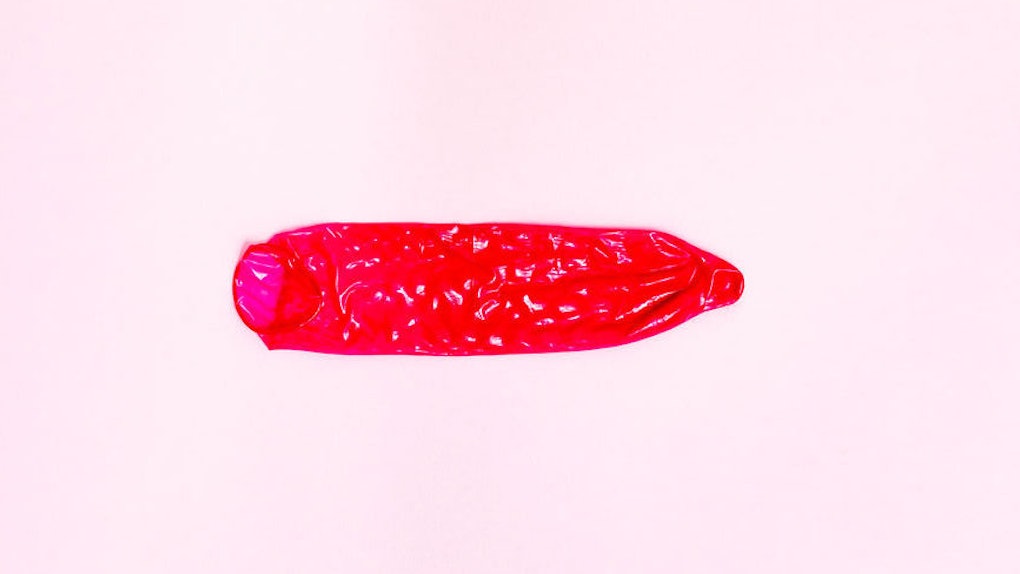 This Is The Difference Between Every Type Of Condom, Because You Have Options

When it comes to condoms, the traditional, latex condom is typically the first thing that comes to mind. However, there are actually several types of condoms that can keep you protected during just about any sex act that strikes your fancy. The differences between every type of condom are important to understand when deciding which one is best for you and your partner(s). That's why knowing about the various options out there is so important.

According to the US Food & Drug Administration, condoms are a very reliable way to avoid pregnancy and certain STDs, but unfortunately, no type of condom is 100 percent effective. "When used consistently and correctly, condoms are highly effective in preventing HIV," according to the FDA's website. "They are also effective at preventing sexually transmitted diseases (STDs) that are transmitted through bodily fluids, such as gonorrhea and chlamydia. However, they provide less protection against STDs spread through skin-to-skin contact like human papillomavirus (genital warts), genital herpes, and syphilis."

"The only way to guarantee you are having safe sex is to take control of your sexual health," licensed relationship therapist Eboni Harris tells Elite Daily. "This means having condoms available. You don’t have to have all of the condom options but keeping a few of the ones related to your most common sexual acts would be convenient." It's also important to realize that not every type of condom provides the same amount of protection, which is why being aware of the efficiency of the specific type you choose to use is so important. So, here's what you need to know.

When most of us think of condoms, the standard latex variety is usually what comes to mind. However, within this category, there are actually a bunch of variations. Non-latex condoms, for example, are a great alternative for people who have allergies to traditional condom materials. These alternative materials include polyurethane, polyisoprene, lambskin, nitrile, and silicone. Spermicidal condoms are pre-treated with spermicide, a contraceptive gel that kills and immobilizes sperm. But, according to Health.com, these types of condoms are actually 97 percent effective while traditional condoms without spermicides are 98 percent effective, on average.

If you're looking to keep things fun, novelty condoms are also available. That includes flavored varieties, glow in the dark, and special ribbing for enhanced stimulation.

Also referred to as female condoms, internal condoms are another good option when it comes to protection against both pregnancy and STDs. According to Planned Parenthood, despite their gender-specific label, these types of condoms can actually be used by anyone.

"Instead of going on the penis, internal condoms go inside your vagina for pregnancy prevention or into the vagina or anus for protection from STDs," wrote Planned Parenthood. "If you use them perfectly every single time you have sex, internal condom effectiveness is 95%. But people aren’t perfect, so in real life they’re about 79% effective."

Even though surgical gloves might not seem like a form of protection against STDs, according to Planned Parenthood, there are STDs that can be passed from genital fluids into the bloodstream via broken skin on the hand. So if you'd like to be fully protected during manual sex (any kind of sexual activity involving hands and genitals), then gloves could be a good option for you.

While not highly likely, it's possible for an STD to enter your system through a cut or sore on your hand that comes in contact with the infected genitals of a sexual partner. "Although recommending finger cots was a standard part of HIV education in the 1980s and 90s, they're not commonly used," wrote Dr. Boskey on VeryWell Health. "Why? Because finger cots are both difficult to find and not particularly useful. Gloves work far better at protecting the skin."

For those who aren't familiar with dental dams, they're basically a type of condom used to avoid STD transmission during oral sex. "Without the protection afforded by dental dams, one can easily contract an STD through the exchange of vaginal fluid or blood if one of the partners is already infected," wrote Dawn Stacey, PhD, LMHC on VeryWell. "Dental dams can also act as a barrier against parasites during oral-anal sex."

According to the Centers for Disease Control and Prevention, it's possible to contract an STD "in the mouth or throat" from both giving and receiving oral sex. "It also may be possible to get certain STDs on the penis (and possibly the vagina, anus or rectum) from getting oral sex from a partner with a mouth or throat infection," says the website.

At the end of the day, different types of sex come with different risk factors. That said, protected sex is such an important part of the reproductive and overall health of both you and all of your sexual partners. If you're still undecided on which form of protection is best for you, reaching out to your health care provider for more information is always a good idea.

More like this
How To Not Get Pregnant After He Came In You & You're Freaking Out
By Rachel Shatto
Making Love Vs. Having Sex: Here's How To Tell The Difference
By Anjali Sareen Nowakowski
25 Dirty Jokes To Text Your Partner For Filthy Laughs
By Corinne Sullivan
Stay up to date