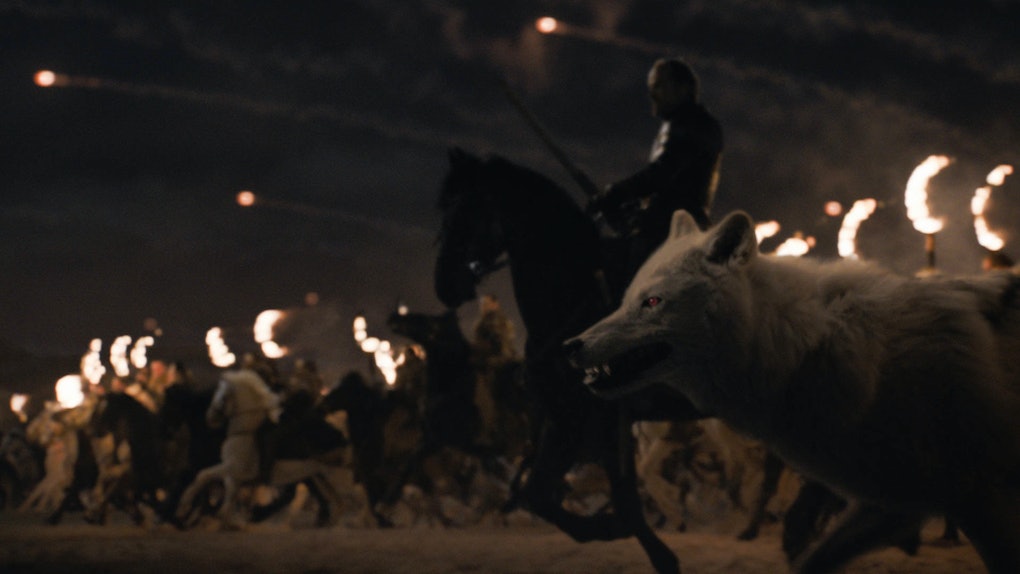 When Game of Thrones Season 8 was filming back in the late spring of 2018, Season 7 from summer was hot in the upcoming Emmy race. In support of the previous season, the heads of different production aspects did the interview rounds, as is expected of them, and though most insisted they couldn't talk about Season 8, VFX head Joe Bauer did give one clue away: Direwolves would have a significant role in the final battle. Except, then Season 8 arrived, and they didn't. Turns out this Game of Thrones Season 8 deleted scene was deemed so complex it had to be cut.

Fans have complained bitterly since Season 3 that direwolves have been getting the short end of the stick when it comes to Game of Thrones. The show tried to make them equal to Daenerys' dragons in the first season, but over time, logistic took over. One of the main ways the novels keep the direwolves front and center is via first-person viewpoints of those who warg into them (either knowingly or unknowingly). By its very nature, TV forces a third person perspective, reducing the direwolf connection in the story's imagination.

Moreover, dragons don't actually exist in the world, so one doesn't have to make them look "realistic." Wolves, on the other hand, do. While it may sound on paper like an easy thing to simply enlarge a living creature for interaction on screen, it's actually really hard to make it look believable.

Consider, for example, this clip with Nymeria. In some shots, she seems to be ten times the size of the other wolves. In others? Not so much.

But the direwolves are building to something in the books, and that's the fight for The Long Night. It's the rule of plotting: One doesn't introduce a giant pack of wolves lead by a six-foot direwolf, and then not use them come the final battle. According to director Miguel Sapochnik, the original script for "The Long Night" stayed true to it.

Speaking on IndieWire’s Filmmaker Toolkit podcast, Sapochnik said there were a lot of ideas the showrunners wanted to include in the final showdown between the Night King's forces and the living. Unfortunately, he had to be the one to deliver the killing blow to these ideas that sounded great on the page, and would never work on screen

There were many things that happened, that people would have been so happy to have happen. Attack of direwolves and crazy stuff. At some point you’re like, '50 direwolves attacking an undead dragon does not a good movie make.'

That's right, at some point, Nymeria and her wolf pack, most likely joined by Ghost, were supposed to attempt to take down Viserion. It would have been a massive bit of fan service, the dragon-direwolf showdown fans probably never knew they needed. It also explains Bauer's comments about Ghost coming back in a big way.

Unfortunately, Sapochnik had to be the realist and say no. The scene wound up not happening, Ghost merely lost an ear. Fans will just have to hope that when George R.R. Martin gets around to A Dream Of Spring, the wolves show up in his version of the fight.

More like this
This 2021 'Game Of Thrones' Season 8 Trailer Is So Confusing... & So Good
By Ani Bundel
When Will 'Riverdale' Season 5 Return In 2021? Its Mid-Season Break Is Long AF
By Rachel Varina
'The Witcher' Season 2: Release Date, Cast, Trailer, & More Info
By Ani Bundel
Stay up to date