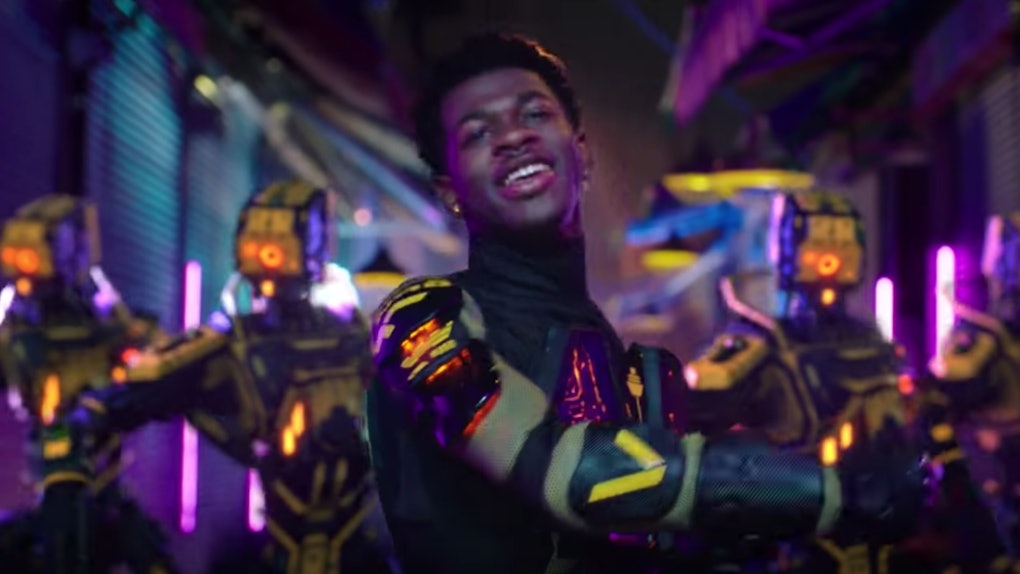 Lil Nas X released the stunning visuals for "Panini" on Sept. 5 and it’s giving me major Blade Runner 2049 vibes. Like seriously, it looks like a movie, fam. The futuristic music video has everything: memes, dancing, cool visuals, and an ode to the rapper’s ~western roots~, if you will. Can you spot the easter egg in Lil Nas X's "Panini" music video? When you do, it’ll make total sense.

“Panini” is a dazzling display of a cyberpunk future filled with neon lights and 3D video chats, basically what we all think the year 2100 is going to look like. Honestly, I’m still bummed we don’t have flying cars, but I’m pretty sure there’s got to be a way to get video girl Skai Jackson’s killer cybersuit on the net somewhere. Anyway, with all of the glittering lights and fun internet references, I wouldn’t be surprised if you totally missed the “Old Town Road” shoutout, but don’t worry, I got your back.

Throughout the entire video, Jackson dodges Lil Nas X as he appears all over town in virtual ads before he contacts her through numerous virtual calls. About a minute into the video, he appears (in reality, by the way) in the middle of an alley with a band of robots.

From that point on, the video continues to become more and more amusing. Jackson aka "Panini" then goes to great lengths to escape her Tokyo Cowboy. Like, she jumps out of an airplane after Lil Nas X manages to secure himself to the wing of the aircraft, singing:

Ayy, Panini, don't you be a meanie / Thought you wanted me to go up / Why you tryna keep me teeny now? / Now they need me, number one on streaming / Oh yeah, you used to love me / So what happened, what's the meaning? I

Umm… Stage 5 clinger or nah? Lol. The video seems to be a hit with Lil Nas X fans and lovers of meme culture, especially with Jackson starring as “Panini.” For anyone who is behind on their meme history, Jackson’s appearance alone is also an ode to the word “petty." In 2016, she became a living meme after a photo of her began to circulate to describe the pettiest, yet humorous situations, like actively tweeting while ignoring someone’s direct messages.

Now, in the “Panini” video, the sight of Jackson jumping out of a plane is taking on another reference, according to fans.

“Lil nas x : breaths, Skai Jackson : aight imma headout,” wrote one fan in the comments section. “This is a visual representation of the term ‘AIGHT IMMA HEAD OUT’” wrote another user. “I’m ready for the Skai Jackson memes,” commented another fan.

Looks like Lil Nas X and Skai Jackson know how to get fans talking. Honestly, I haven’t laughed harder. Hmm.. I wonder if there are any other meme’s I missed in Lil Nas X’s “Panini” video… ? Excuse me while I watch it about fifty-’leven more times.

More like this
This Video Of Wonho Answering Trivia Questions About Himself Is Required Viewing – EXCLUSIVE
By Brandy Robidoux
These Singers Were Accused Of Copying Other Artists In Their Music Videos
By Brandy Robidoux
BTS' "Butter": Release Date, Music Video, Performances, & More Details
By Michele Mendez
Stay up to date