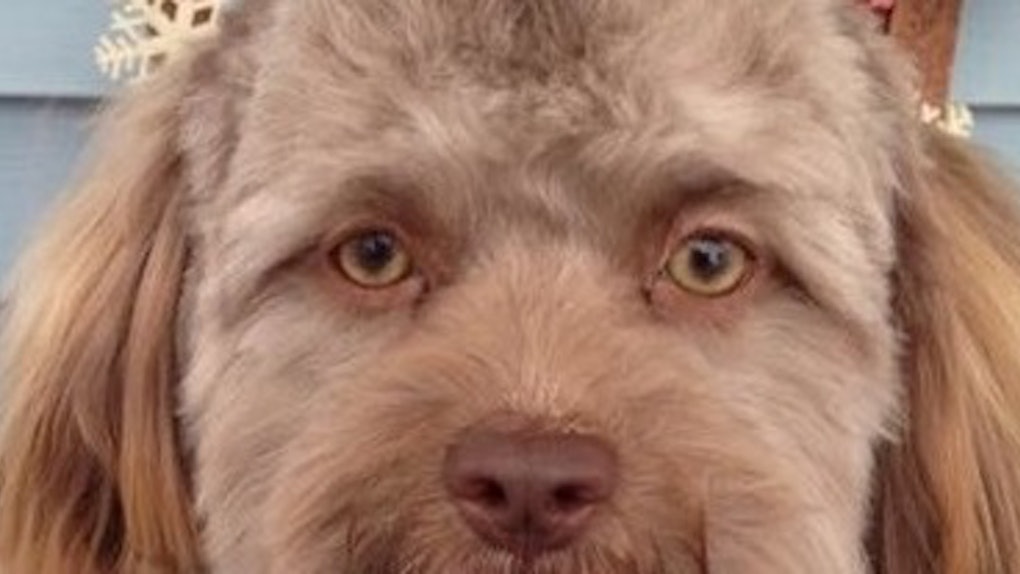 This Dog Looks Like A Person & He's Going Viral For It

We all know our pups at home are beyond special. If you post pictures of your pet on social media in hopes that everyone notices just how cute your furry friend is, you're really not alone. You probably receive a bunch of comments with people gushing, "So adorable," and "AWE, how cute." But when Chantal Desjardins shared a picture of her dog, Yogi, on Facebook, she never expected to receive the reaction she did. Chantal's photo of her dog recently went viral. People think that this dog looks like a person, but you can take a look for yourself and be the judge of that.

Elite Daily spoke with Chantal about all of the social media hype surrounding Yogi. She reveals that her original intention was to snap a pic because she "can never get Darla (the other dog) to keep bows in her hair." Who knew that it wasn't Darla with the bows who would be the focus of the attention, but actually Yogi?

The Shih-poo puppy had people doing a double take for having the most human-like face you might have ever seen on a dog. That's right — people are convinced this pup has the face of an actual human. You can see the resemblance mostly in the eyes, and once you see it, it really can't be unseen.

Have a look at this picture of Yogi for yourself.

When talking about Yogi's face, Chantal tells Elite Daily, "I didn’t see it until people start[ed] commenting on my Facebook post." Now, like many others, she began to take notice to this intriguing resemblance. She continues to tell us, "I see how people can see human qualities."

Yogi looks like he has an old soul somewhere within, but it turns out, he is only a year old. According to Chantal, Yogi just celebrated his first birthday in February, and I really hope this sweet pup had a pawsitively wonderful day filled with treats galore.

Real talk: Do you see human-like features in the face or the lips?

The snap of the two furry friends was recently uploaded to Reddit, along with the caption, "A friend of a friend posted a pic on Facebook of her dog. It looks like it has a man’s face." This is where the pic really took off.

A lot of users were saying similar things about how you can see the human face in Yogi's eyes, but one user even offered up that it was an "Eyes and human type lip combo." There was actually a debate going on in the comments on Reddit about whether it was more the eyes or the lips that gave a human vibe to this pup.

Some users were entirely convinced the pic of the two dogs was "photoshopped." Some were even saying it was a "face swap" like on Snapchat.

But, Yogi is just one incredibly fluffy pup.

Regardless of what you think is causing the human connection, there's no denying that Yogi is a special pup. Out of all of the comments Chantal has been getting about Yogi, her favorites are when people comment on "how fluffy and sweet he looks," which she says is "very true!"

Chantal shared with Elite Daily some of her favorite photos of Yogi, and they show off all of that fluffiness. As much as some people believe he has a human-like face, Yogi is just a good ole' pup who likes the same things all dogs like. Chantal said that Yogi's favorite activities include, "Trying to get Darla to play with him, going for walks, playing ball, and snuggling!"

Those all seem like dream activities to me, to be honest. Well, I hope that this pup is celebrating his new Internet fame by doing all the things he loves.