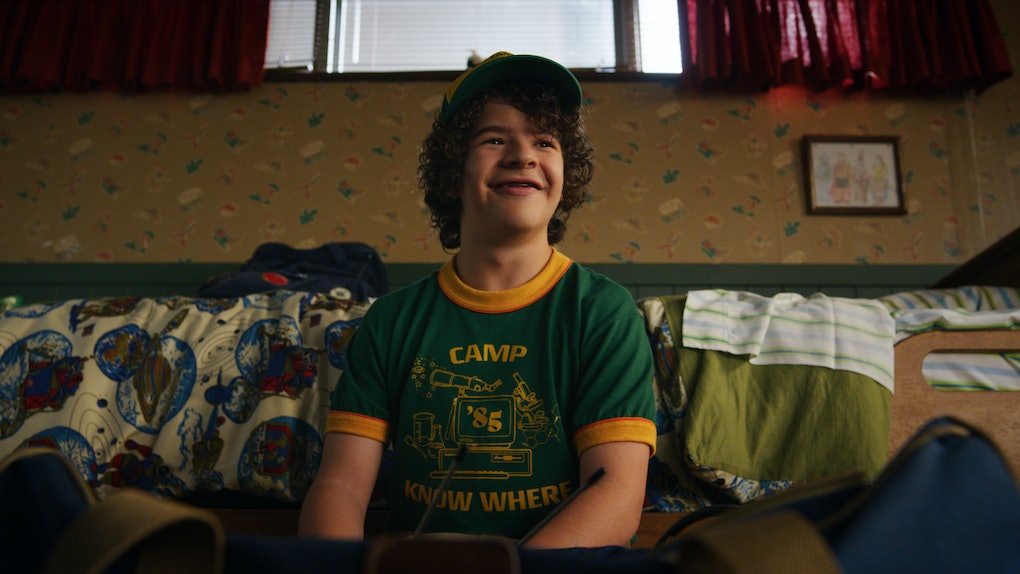 This post contains spoilers for Season 3 of Stranger Things. One summer at camp can change everything, and while Stranger Things' Dustin has faced plenty of life-changing seasons, his time at Camp Know Where resulted in a pretty big milestone: He got a girlfriend. Viewers had to wait until the Season 3 finale for his sweetheart Suzie to appear, but her reveal included a clue of just how serious she and Dustin are in terms of summer romance. This detail about Dustin's hat in Stranger Things 3 is adorable, and if you missed it, be prepared to re-watch the never-ending cuteness of Suzie's first scene.

After ending up a lonely wallflower at the school dance at the end of Season 2, Dustin (Gaten Matarazzo) returned to Hawkins at the start of Season 3 with an updated love life, having spent the first half of the summer building robots at Camp Know Where. Wearing a brand new hat emblazoned with the camp name and logo, he also came home with a radio tower he intended to use for contacting Suzie (Gabriella Pizzolo), the Utah native he met at camp. Because Dustin wasn't Mormon like her, Suzie feared that her parents would not approve of their relationship, so they had to use their radios to keep in touch. But much to his dismay, Dustin couldn't reach her the first time he tried using the radio tower.

Then swept up in cracking the Russian code that came through on the radio, Dustin didn't try calling Suzie until the season finale, when Joyce (Winona Ryder) and Hopper (David Harbour)'s needed the correct digits of Planck's constant. As Dustin's radio call to Suzie connected to Salt Lake City, the camera panned across items in her bedroom before landing on her. ICYMI, a GIF posted on Seventeen revealed that Suzie has Dustin's famous red, white, and blue hat on her bedside table, which is essentially the 13-year-old equivalent of wearing your boyfriend's old hoodie, right?

Not only did Suzie have a token of Dustin's love nearby, but the two had such intense summer lovin' that they even had their own version of "The NeverEnding Story" theme song perfected. While chances of the two reuniting in person are still unclear, in the flash-forward at the end of the season finale, Dustin's friends were still teasing him with the song. He had ditched his Camp Know Where hat by then, but he was still determined to reserve his singing for Suzie, who seemingly still had his old hat. Young love can be pretty dramatic, but it looks like this duo is still as tight as ever even after the tumultuous Battle of Starcourt.

The other kids of Hawkins experienced bumpy relationships during that summer, but the finale implied that Mike (Finn Wolfhard) and Eleven (Millie Bobby Brown) and Max (Sadie Sink) and Lucas (Caleb McLaughlin) also survived into the fall. Co-creators Ross and Matt Duffer have also hinted that a potential Season 4 of Stranger Things would include plots outside of Hawkins, suggesting that a visit between Dustin and Suzie could be in the works. After all, the series can't end without Dustin reuniting with both his Suzie-Poo and his original hat.

Season 3 of Stranger Things is streaming on Netflix.

More like this
This 'Stranger Things 4' Theory About Eleven's Past Is Super Dark
By Ani Bundel
The Best 'Grey's Anatomy' Couples, Ranked By Their Endgame-Worthiness
By Abby Monteil
11 Moments From 'Ramy's Ramadan Episode That Are Way Too Relatable
By Umber Bhatti
Stay up to date