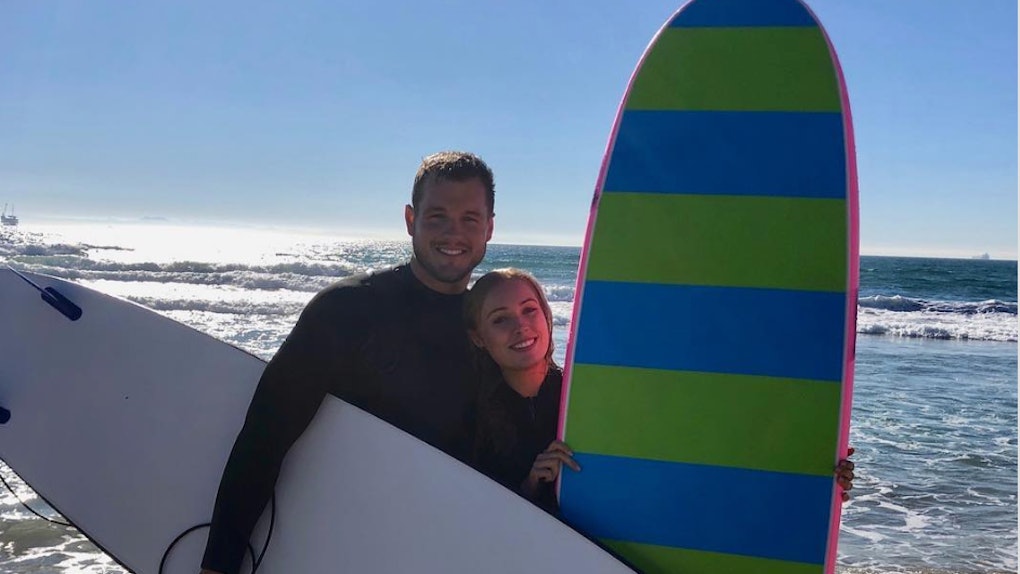 It's become a cliché to say that this is the most dramatic season of The Bachelor yet, but... honestly... it really feels like that's what this season has been. Never before has a Bachelor been left with no women at all at the end of the season. But that's exactly where Colton Underwood found himself after he professed his love for Cassie and she broke up with him. But love always finds a way, as Colton proved when he fought for Cassie's heart and won it in the season finale. But, where are Colton and Cassie at now that the filming is over? This Colton and Cassie relationship update will put your romantic heart at ease.

Cassie and Colton have had some rocky moments over the course of their relationship, especially after Cassie's true feelings were questioned by other women on the show. A few weeks into the season while the women were on a bus in Singapore, Katie overheard Cassie and Caelynn talking about the possibility of one of them ending up with Colton and the other becoming the next Bachelorette. That comment had her questioning whether or not Cassie was on the show for the right reasons, and Cassie and Kirpa having an explosive fight about Cassie's intentions. Even though Cassie defended herself, it turns out she was having some doubts about her future with Colton. They were doubts that were only exacerbated after Colton admitted that Cassie's dad Matt hadn't given his blessing, and Matt made a surprise visit to Cassie in Portugal.

After talking with her dad, Cassie decided to break up with Colton and leave the show. However, Colton was ready to commit to only Cassie, so he didn't take that news too well...

But, what's any good love story without a little drama? As fans saw in the dramatic conclusion to the season, Colton chased after Cassie to fight for their love. He told Cassie that they didn't need to get engaged, but instead could simply try out being in a relationship together. Finally, Bachelor Nation got the happy ending they've been looking for, albeit a modified one.

After months and months of speculation, Bachelor Nation is finally able to confirm that Colton and Cassie are now happily dating and seeing where their relationship goes. Over the past few months, there were a few hints that they were a part of each other's lives. For instance, Colton has some online interactions with Gregg Sulkin, a British actor who is dating Cassie's sister Michelle. In January, Colton liked one of Gregg's Instagram posts:

Colton liked another of Gregg's posts in February:

It looks like Colton has not only been getting closer to Cassie, but also spending time with her family and friends, which is a very good sign for their relationship. Like he said to her in the finale, they're taking it day by day and figuring out what they're ready for as their relationship progresses. Colton told Cassie, "I want to show you how much I'm willing to give up for us."

During After the Final Rose, Bachelor Nation learned that Colton and Cassie are "super in love," and Cassie even said that Colton is her best friend. Getting engaged is something they've talked about, but they're giving their relationship room to grow. Colton's moved to Los Angeles a few miles from Cassie, and he plans on asking her dad for his blessing again to make sure he has it when the time is right.

It's nice to see that Colton and Cassie taking their relationship slow after all the drama of this past Bachelor season. If fans learned anything from this season, maybe it's that the franchise's pressure to get engaged right away can sometimes be too much for some people. It's nice to see Colton and Cassie stepping outside the mold of The Bachelor and taking their relationship at their own pace.

More like this
What Would An LGBTQ+ 'Bachelor' Season Look Like?
By Abby Monteil
Cassie Randolph Addressed Colton Underwood’s Coming Out On YouTube
By Lydia Wang
Rachel Lindsay's Final 'Bachelor Happy Hour' Podcast Episode Will Air In May
By Abby Monteil
Stay up to date