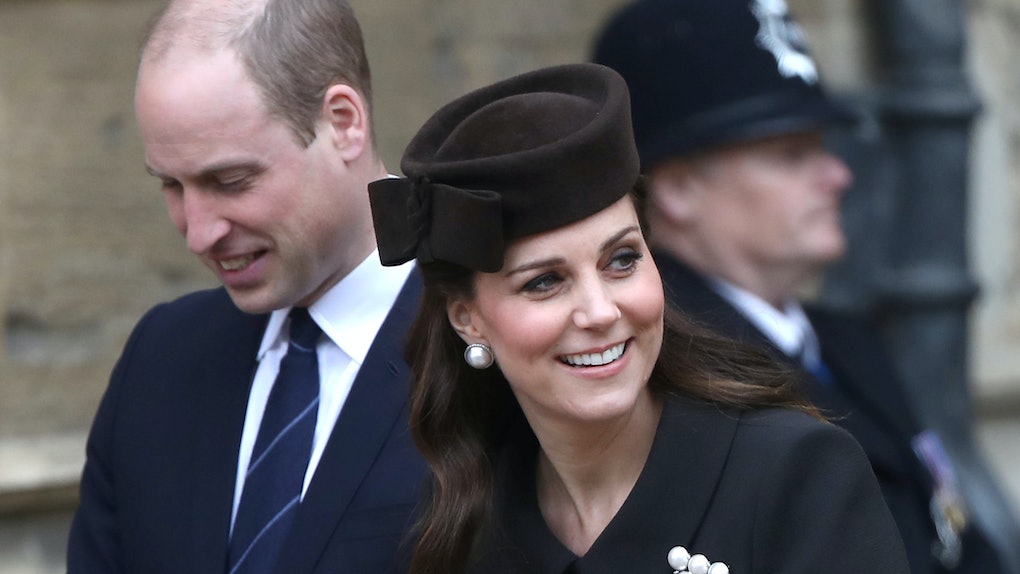 Royal baby number three is going to be here any day now! A new clue Kate Middleton will give birth soon can be found in front of the hospital she's planning to give birth in. On Monday, April 9, parking restrictions were seen being put in place in front of the Lindo Wing of St. Mary's Hospital, the same place where Middleton gave birth to George and Charlotte and will be giving birth to baby number three. Workers were seen placing barriers around the entrance of the Lindo Wing in London, which could mean the hospital is preparing for the arrival of the newest member of the royal family.

In March, the fence in front of the hospital was given a new coat of paint, which can also be taken as a sign that the hospital is getting everything in order before the big day. Middleton's official due date hasn't been revealed, but outside of appearing with Queen Elizabeth and the rest of the royal family on Easter, she made her final official public appearance before giving birth on March 22.

Middleton's third pregnancy was announced via a tweet from Kensington Palace on Sept. 4, 2017.

It sounds complicated, but in the U.K., the only people who are not commoners are the Sovereign and peers of the realm, [people with titles like] Duke, Marquess, Earl, Viscount, and Baron.

Koenig also noted that Will and Kate's children's titles are a bit different because of their own titles, the Duke and Duchess of Cambridge. “Royal children are ‘styled’ differently if they are the children of a royal duke,” she said. That's where the titles of Prince/Princess of Cambridge come from.

Essentially, what Koenig means is the only people who are technically royalty are those who are going to be the sovereign one day (Prince Charles, Prince William, and Prince George) and people who have been given a noble title by the sovereign. That means Prince Harry is a commoner as well (the word "commoner" sounds laughably dramatic, doesn't it?), but members of the royal family are usually given new titles by the sovereign on their wedding day, so that might change come May 19. It's rumored that Queen Elizabeth II will give Harry and Meghan the titles of Duke and Duchess of Sussex. If this happens, Meghan Markle will be the first-ever Duchess of Sussex.

But enough about titles, let's talk about babies. Kate Middleton and Prince William debuted both Prince George and Princess Charlotte on the steps of the Lindo Wing when they were born.

The Lindo Wing of St. Mary's Hospital in London is also where Princess Diana gave birth to Will and Harry when they were born, and they were also debuted in the same spot by Princess Diana and Prince Charles. So basically, if the Lindo Wing is getting ready for the royal baby, we should be too.

More like this
Prince Harry's Instagram Tribute To Prince Philip Comes Straight From The Heart
By Michele Mendez
Why Did Addison Rae Deactivate Her Twitter? Fans Think This Is The Reason
By Brandy Robidoux
Britney Spears' Instagram Message To Fans "Concerned With Her Life" Is So Positive
By Brandy Robidoux
Stay up to date