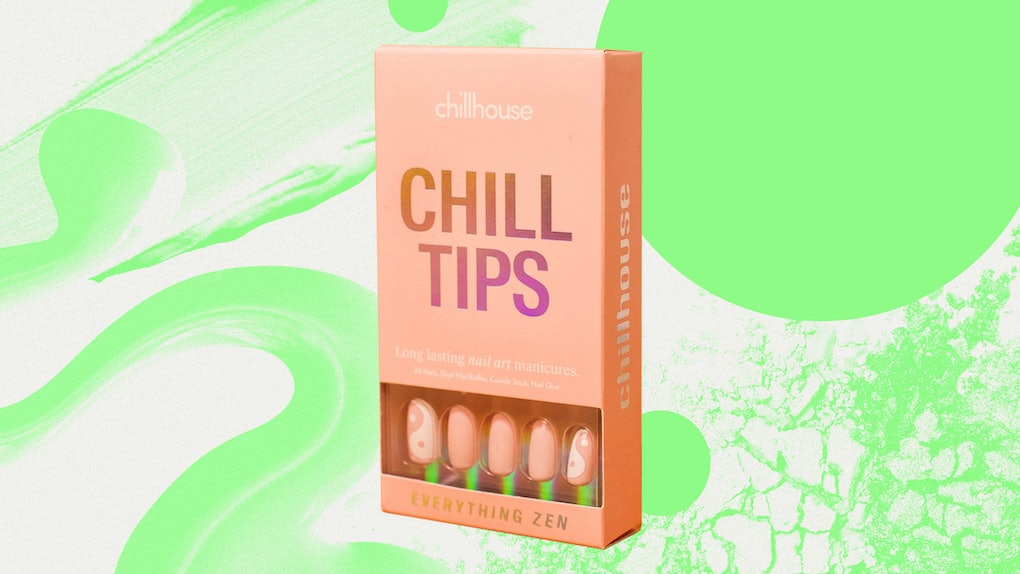 With thousands of beauty brands crowding virtual shelves and influencers touting a new product every day, how do you decide what's actually worth a shot? You leave the trial and error to the pros. In Elite Daily's new beauty review series, What's The Deal With..., we'll sift through and test the buzziest products to give you an honest, no-bullsh*t look at how it works IRL, from the price and packaging all the way to the actual results. From there, you can decide which ones deserve a coveted spot in your beauty arsenal.

My nail beds suck. I never thought I'd relate to Karen from Mean Girls, but here we are. In the Before Times, I'd close my eyes and let a talented manicurist cut, file, and buff away most of my perceived "problems." (Rationally speaking, there's literally nothing wrong with my nails.) Now that 11 months of a global pandemic have unlocked a previously unknown level of agoraphobia-adjacent fears in me, I'm left with two choices: Figure out how to paint my own nails better than a toddler, or skip the hassle with press-on nails. Judging from this Chillhouse Chill Tips Press-On Nails review, you can guess which option I've chosen.

A new-age spa with a flagship store in New York City's SoHo, Chillhouse offers nail services on top of facials, massages, infrared saunas, a café and more. Founded by Cyndi Ramirez-Fulton in 2017, Chillhouse has since become a viral hotspot for anyone looking for an Instaworthy manicure and overall experience. While the brand offers normal manicure services, it's widely known for its nail art offerings, which feature trendy, graphic, multi-colored designs. To give people those same salon results at home, the brand released Chillhouse Chill Tips ($16, Chillhouse), a set of press-on nails in a variety of sizes, along with nail glue, a cuticle pusher, and a nail file.

Clearly one for the easy way out, I've never whipped out my credit card so fast. After trying the very beautiful, pastel pink yin and yang design, here's how I scored the press-on experience overall in the following areas:

On the surface, I love everything about press-on manicures, especially these Chillhouse options. The packaging was clean and minimal, the nails looked gorgeous, the instructions were straightforward, and I had all the tools I needed. While the application process — pushing your cuticles down, buffing your nail, applying glue to your nail and the fake nail, and firmly pressing it onto your own nail for 30 seconds — and the feel of the manicure post-application weren't bad at all, I found it a bit messy. This could very well be attributed to user error (I am an oversized toddler, after all), but it's a little harder to clean glue off your fingers than, say, color.

I don't have much to say about the smell in general other than you'll smell the glue. I'm not in love with the smell of glue, but that's showbiz, baby! At $16, Chill Tips certainly don't cost a fortune — they're definitely cheaper than an actual manicure — buuuuuut there are other quality press-on sets out there for a little over half that price. That said, if you don't mind paying a little extra for nails so cute, you wanna scream, have at it.

The look of the manicure was everything. I have never taken so many pictures of my hand in one sitting. Sadly, the honeymoon phase between me and Chill Tips ended two days later, when two nails popped off suddenly. Again, all signs point to user error. (Did I not hold long enough? Did I need more glue?) Still, I hadn't done anything entirely strenuous or different with my hands and nails, and I was hoping this mani would see me through some more photo shoots. Even then, it was fun while it lasted.