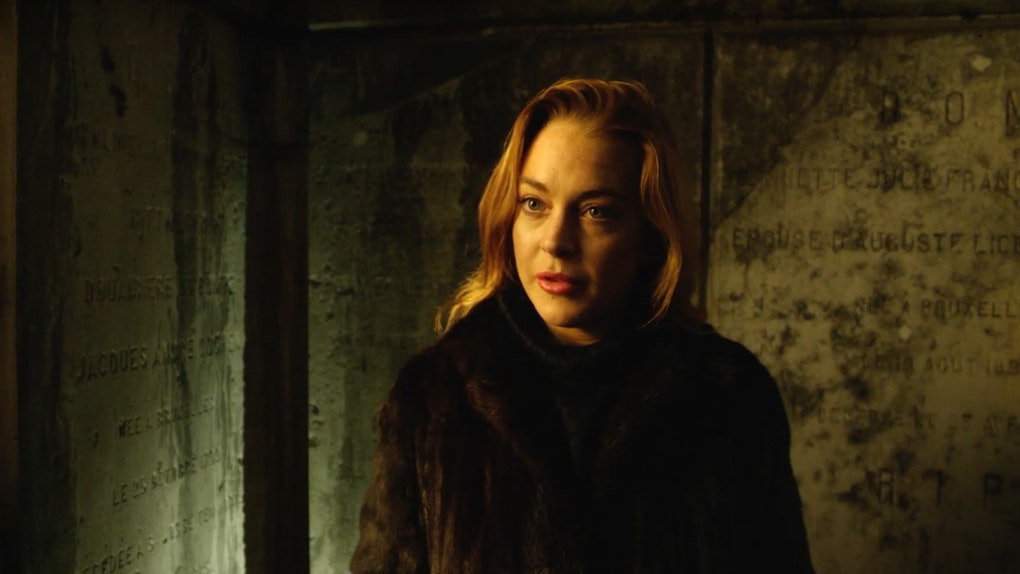 Well, it is official — 2019 is definitely the year of Lindsay Lohan. Although the actress moved away from the spotlight for the past several years, she is back in a big way now that she has her own reality show on MTV... and she is also back to making movies again as well! The trailer for Lohan's first new movie in five years just dropped, and it will definitely be a shocking turn for fans. Check out the Among the Shadows trailer with Lindsay Lohan, which is a werewolf-filled supernatural thriller.

This new Lindsay Lohan movie is definitely a big departure from her hit teen queen films, so do not expect anything close to Mean Girls or Freaky Friday. Instead, Lohan is diving into the supernatural thriller genre with Among the Shadows, a caper centered around a clan of werewolves. It does not look like Lohan will be howling at the moon, though — she plays Patricia in the film, the wife of a president who hires Detective Kristy Wolfe (Charlotte Beckett) to stop a murder attempt on her husband. As her last name bluntly suggests, Kristy herself comes from a long line of werewolves, but she hides this secret from others as she investigates the werewolves who are threatening Patricia's husband.

Check out the newly released trailer for Among the Shadows below:

Among the Shadows marks Lindsay Lohan's first feature film role in five years. Her last movie role was in 2013's The Canyons, another thriller. Although the trailer was just released, Lohan actually filmed Among the Shadows several years ago. The movie was primarily shot in Brussels in 2015, with additional scenes shot throughout Europe in 2016. This was also around the same time that Lohan moved out of the United States and began living in London, followed by Dubai, where she still currently lives.

In addition to this new film role, Lindsay Lohan is also currently starring in her own MTV reality series, Lindsay Lohan's Beach Club. The show premiered one week into 2019, and it follows Lohan and her employees at her beach club in Mykonos, Greece. On top of that, Lohan recently bought the rights to the Tina Seskis novel The Honeymoon, and is working on adapting it into a movie in which she will star.

So it looks like we are going to be seeing a lot more of Lindsay Lohan this year. The Among the Shadows trailer did not reveal when the movie will be released, though, so fans will have to keep their eyes peeled for a premiere date sometime soon.