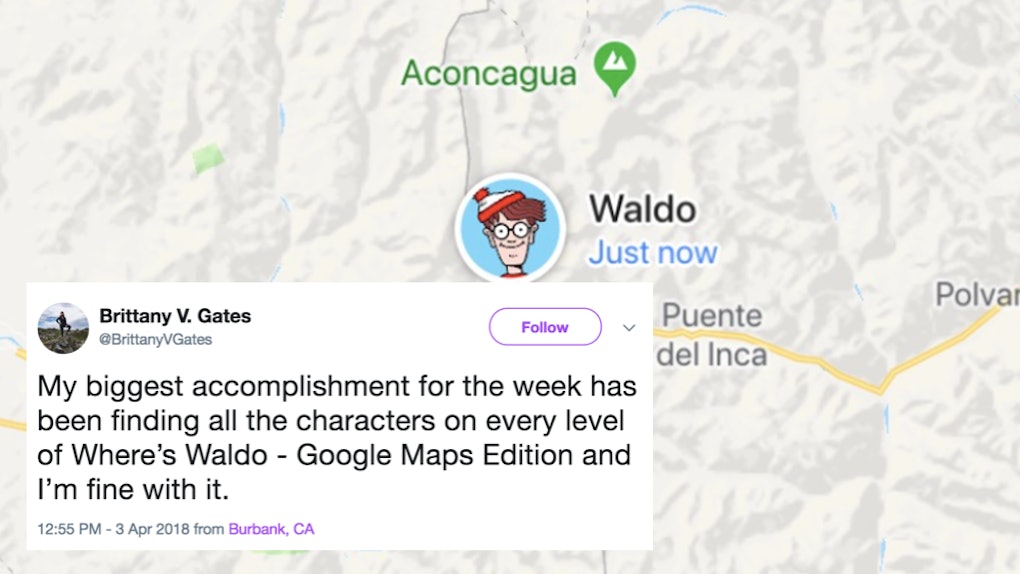 Not only has the warm weather done wonders to my skin (and to my personality), but it also seems to be bringing a little extra fun to the world of Google Maps. Although their live Mario Kart game is unfortunately a trend of the past, the app most recently released a game of Where's Waldo? in honor of April Fool's Day. And if you're not already playing, these tweets about Where's Waldo? on Google Maps prove that people — myself included — are still super dedicated to this ultimate blast from the past.

UPDATE: Where's Waldo will be on Google Maps until the end of the day on Wednesday, April 4, a Google representative tells Elite Daily.

EARLIER: Even though I'm definitely not getting any younger, the fact that I'm now able to relive my glory days in Where's Waldo? sure makes it feel like I am. The game, which is currently available on Google Maps via mobile, tablet, and desktop devices, initially became available for a few days as of Saturday, March 31. Elite Daily reached out to Google to see how long Where's Waldo? would be live via Google Maps, but they did not respond by the time of publication with an exact date. According to tweets, however, people are still playing as we speak — and if you haven't already heard about its hype, you're definitely in for a treat. It's obvious that everyone is so damn stoked about it.

If you're not already in on the fun, you might be wondering how you can start officially playing Google Maps' Where's Waldo? game. I'm giving you fair warning beforehand: It's not like any regular version of the game we've come to know and love throughout our childhood years. The bright side is that — unlike Google's now-defunct Mario Kart game — you don't need to be in a car to play. To get involved, simply start off by making sure your Google Maps app is totally updated. Once it is, you'll then be ready to go.

Upon opening the site or the app, you'll spot a waving Waldo, which is merely just the invite to play the game. Then, you'll see other classic characters such as Wenda, Woof, Wizard Whitebeard, and infamous villian, Odlaw, and you'll be able to travel all around the Google Maps world while searching for each and every one of them. Once you find Waldo, you can excel to the next level — and along the way, you'll earn badges. TBH, after earning my first badge, I've never felt more gratified in my entire life. I am killin' it.

This rigorous game might even settle that travel bug of yours, because you'll actually be able to virtually travel from North America to pretty much anywhere around the world. Characters are even hidden in super specific locations, such as the Andes Mountains, as well as in the home to Spain's world-famous tomato festival, Buñol. It's all-around a pretty sweet feature, if you ask me. Not to mention, it's about to take up literally all of my free time... but that's cool, I suppose.

So if you weren't already sure if you should be playing Google Maps' Where's Waldo? game, the tweets are here to prove that you most definitely should get on that. There's a chance that basic things like working, eating, and showering might get in the way, and it might also tear apart a few friendships — but other than that, what do you have to lose? There is literally nothing more important in life than beating everyone you know in a hunt for Waldo, and that's a fact.