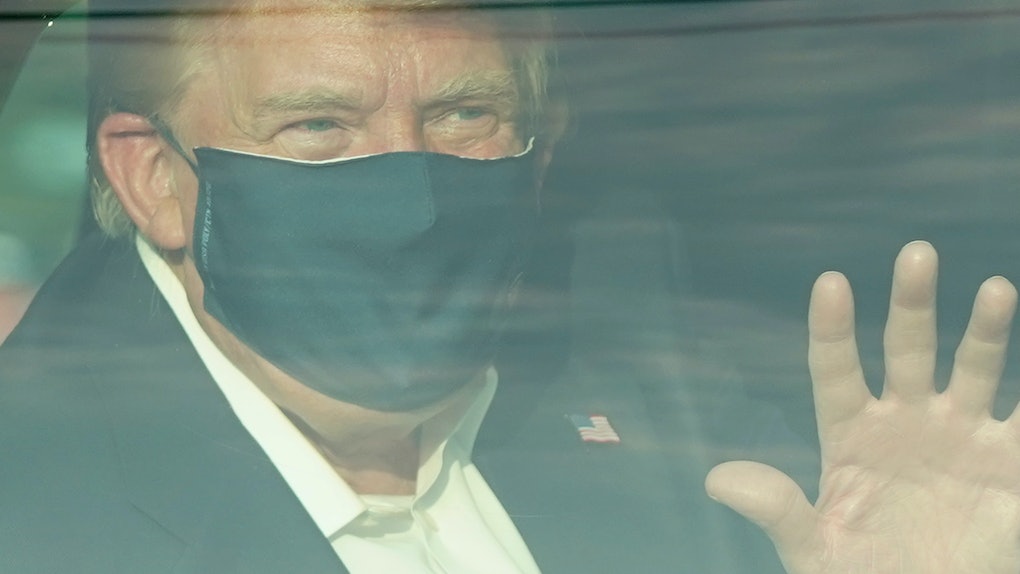 Hours after President Donald Trump's doctors revealed he'd received treatment for low blood oxygen levels, the president incited backlash with a brief appearance for supporters on Sunday, Oct. 4. The president, who is a few days into his coronavirus treatment at Walter Reed National Military Medical Center, was accused by a doctor at the medical center for putting the lives of Secret Service agents at risk for "political theater" — and these tweets about Trump breaking quarantine slam what people are calling a "reckless" move. White House spokesman Judd Deere said in a statement to CNN on Oct. 4 that "the movement was cleared by the medical team as safe to do" and "appropriate precautions" were taken during the ride. Elite Daily reached out for further comment on the ride and the criticisms, but did not hear back at the time of publication.

Amidst reports the president was furious with the less-than-rosy picture of his health which was being shared with the public, Trump upped the ante of his coronavirus updates. The president, who had been sharing video updates with his Twitter followers, hinted at the excursion in one clip, saying, "I also think we’re going to pay a little surprise to some of the great patriots that we have out on the street."

On Sunday afternoon, the president was seen leaving the hospital by car and waving at his supporters before being driven back to the hospital. Photos and videos of the drive-by appearance showing the president wearing a face mask and accompanied by a driver as well as several Secret Service agents. The "reckless" photo-op was quickly slammed by many who criticized Trump for needlessly putting his employees at risk of contracting the virus.

Dr. James P. Phillips, an attending physician at Walter Reed and the Chief of Disaster Medicine at the Department of Emergency Medicine of The George Washington University, wrote on Twitter, "Every single person in the vehicle during that completely unnecessary Presidential 'drive-by' just now has to be quarantined for 14 days. They might get sick. They may die. For political theater. Commanded by Trump to put their lives at risk for theater. This is insanity."

While agents were photographed wearing protective gear, Phillips said the vehicle they were in only added to the risk of spread. "That Presidential SUV is not only bulletproof, but hermetically sealed against chemical attack," he added. "The risk of COVID19 transmission inside is as high as it gets outside of medical procedures. The irresponsibility is astounding. My thoughts are with the Secret Service forced to play." Elite Daily reached out to the White House for comment on Phillips' tweets, but did not hear back by the time of publication.

Twitter users were quick to take to the social media platform to condemn what many saw as a show of ego and further proof he was not taking the coronavirus seriously. Others questioned why Trump was allowed to flout conventional coronavirus protocol and leave his hospital room, in direct contrast to recommendations from the Centers for Disease Control & Prevention (CDC) that people diagnosed with COVID-19 should isolate themselves from others and quarantine.

Prior to the drive-by appearance, it was reported on Oct. 4 that Trump required medical intervention after his blood oxygen levels dropped twice, and he'd been put on the steroid dexamethasone, which is typically only used in serious and critical cases of COVID-19, according to The New York Times.

Despite this, White House Physician Sean Conley said the president was responding to the aggressive treatment and could be discharged from the hospital as early as Monday, Oct. 5. As of publication, President Trump tweeted he would be released on Monday evening. Whether or not that release time sticks, it's safe to say campaigning for the Nov. 3 election is first and foremost on Trump's mind as he recovers from the illness.