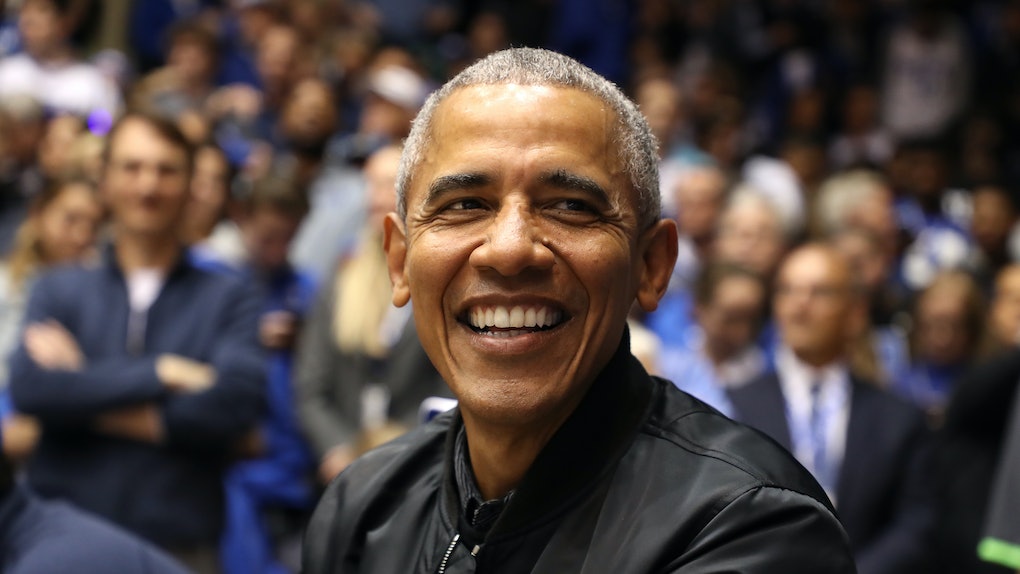 Finding himself in the midst of a ramped up Congressional impeachment investigation, President Donald Trump resorted to his favorite coping mechanism, Twitter, to claim Democrats ought to give up on the Mueller report. And then, he used it to name drop his favorite scapegoat, President Barack Obama. Twice. Trump suggested Congress look into the former president's business plans, and these tweets about Trump asking Congress to investigate Obama's Netflix deal show people are losing it over the wild tweet.

On Sept. 12, the House Judiciary Committee approved rules that set forth an “investigation to determine whether to recommend articles of impeachment," according to The New York Times. The committee plans to hold hearings on potential impeachable offensives, such as alleged hush money payments to women who said they allegedly had affairs with Trump, potential corruption during the 2016 campaign, and, of course, Former Special Counsel Robert Mueller’s investigations into obstructions of justice and Russian election interference. President Trump has previously denied allegations of affairs and hush money payments and any wrongdoing during the 2016 presidential election. Mueller's report didn't find sufficient evidence of Russian coordination with the Trump campaign, and he didn't make a ruling on obstruction of justice.

Of course, Trump isn’t too happy about all this. In the early hours of Sept. 16, he tweeted what he has repeated multiple times since the release of the Mueller report: “ZERO COLLUSION, ZERO OBSTRUCTION.” He continued: “So they say, OK, lets look at everything else, and all of the deals that 'Trump' has done over his lifetime. But it doesn’t work that way. I have a better idea. Look at the Obama Book Deal, or the ridiculous Netflix deal.”

What in the world is "Obama Netflix?" Question mark included. Of course, you're likely aware the multiyear deal the Obamas made with Netflix back in May 2019, but Twitter was quick to jump on the phrasing at the end of Trump's tweet, hoping an entire "Obama Netflix" streaming service will become a real thing.

Again, Trump is likely referring to the Obamas' Netflix deal inked this past spring, and their debut project, American Factory, an original Netflix documentary produced by Barack and Michelle Obama that dropped in August 2019. It follows the story of an Ohio General Motors plant after the 2008 financial crisis. People who watched the documentary jumped to the couple's defense.

While Twitter always loves trying to make sense of Trump tweets, his latest was also just a reminder of how much they actually miss the former president. And the Barack-Michelle memes.

At this point, it's hard not to wonder whether Trump isn't just as obsessed with Obama as the rest of us are. He's talking about him all the time.

The tweet, dramatic question mark and all, was almost like "covfefe" all over again. People are already planning to name their babies, or themselves, after Obama Netflix.

On a more serious note, the Judiciary Committee investigation is well underway, with Democratic infighting and lawmakers fiercely divided both within and along party lines. Whether they do find grounds for impeachment, Democrats used the Sept. 12 vote as a symbolic move, according to The New York Times, showing they are "serious about building an impeachment case, even if it is not yet taking the politically loaded step of filing charges."

So, it doesn't appear that Congress will be investigating the Obamas' Netflix deal anytime soon, but it will be continuing its impeachment investigation with its first hearing on Sept. 17, when former Trump campaign manager Corey Lewandowski is scheduled to testify. Meanwhile, the president has gotten Twitter's hopes up for an even bigger Obama-Netflix collaboration. Who knows, with all this social media attention, maybe the former president will be able to make it happen.