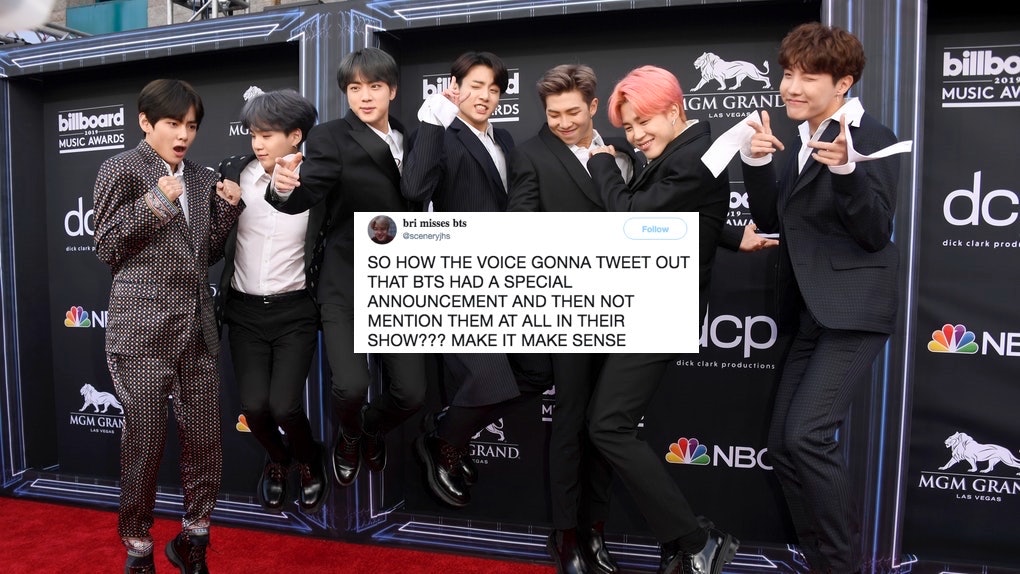 BTS fans were just handed a major letdown. It was all but confirmed that the band would be performing on the season finale of The Voice broadcast live on NBC on May 20 or 21 when The Voice released a promo video teasing a "special announcement" from BTS and The Jonas Brothers would come during the May 14 episode. But the episode came and went and it was announced that the live broadcast's featured performers will be The Jonas Brothers and Taylor Swift with Brendon Urie. No BTS to be found. The tweets about The Voice snubbing BTS' "announcement" show how bummed BTS' fans are over The Voice not following through with what they promised.

NBC and The Voice gave fans lots of reasons to believe that BTS would be performing on the show's finale. The group was photographed on the Universal film lot in Los Angeles with John Legend (a judge on The Voice this season) on May 7, hinting that they could be there to film something for the show. Fans interpreted this on-set photo with BTS and Legend to mean that BTS was filming a performance that would be aired on The Voice for the finale. The theory checks out, seeing as the boys would be busy on the American leg of their Love Yourself: Speak Yourself tour during the finale dates, making them unable to be there for the live performance. Plus, fans who attended tapings of The Voice tweeted accounts of the boys surprising the audience with a performance (presumably the one they were pre-taping for the finale).

On top of all of that, The Voice released a promotional video on May 13 that involved BTS, saying the group had a "special announcement" that would be made during the show on Tuesday, May 14. Well, that show already passed, and there was no BTS announcement at all. The only announcement that was made during the show was a pre-recorded video of The Jonas Brothers saying they would be performing in the finale. Host Carson Daly then revealed that Swift and Urie would also be performing. Nothing about BTS was mentioned.

NBC, bruh, where is this "special announcement?!" Twitter has some words for this.

Apparently, NBC's tweet teasing BTS' "special announcement" has been deleted. Is it possible the something went wrong with the boys' rumored pre-taped performance? Did Taylor Swift come in as a last-minute act and BTS got bumped to make way? (Which would, frankly, be unacceptable.) Maybe there was a contract dispute? None of this is adding up.

The BTS ARMY is upset that they watched an entire episode of The Voice under the impression that they would see their favorite guys at some point, yet that never happened. Something must have gone down behind the scenes... but what?

It is hella weird that NBC and The Voice would make such a public to-do about the group, and then basically act like it never happened. And that's the most frustrating part for ARMYs: that the bigwigs behind The Voice did not even address the issue, choosing to scrub their socials of any mention of a BTS announcement without another word, which struck ARMYs as very unprofessional.

According to tweets from fans who were reportedly at a Voice taping, BTS filmed a performance for the show, so now fans are left wondering if that footage will ever be seen. Perhaps they decided to delay showing the footage in the penultimate episode and air it during the live broadcast instead, but regardless of what the show's plan is, the BTS ARMY is not pleased.

More like this
These Tweets About Regé-Jean Page Leaving 'Bridgerton' Are Royal Bummers
By Cianna Garrison
These Tweets About Ariana Grande Joining 'The Voice' As A Coach Are All Over The Place
By Michele Mendez
This 'Drag Race' Season 13, Episode 14 Clip Shows The Top 4 Getting SO Real
By Lexi Williams
Stay up to date