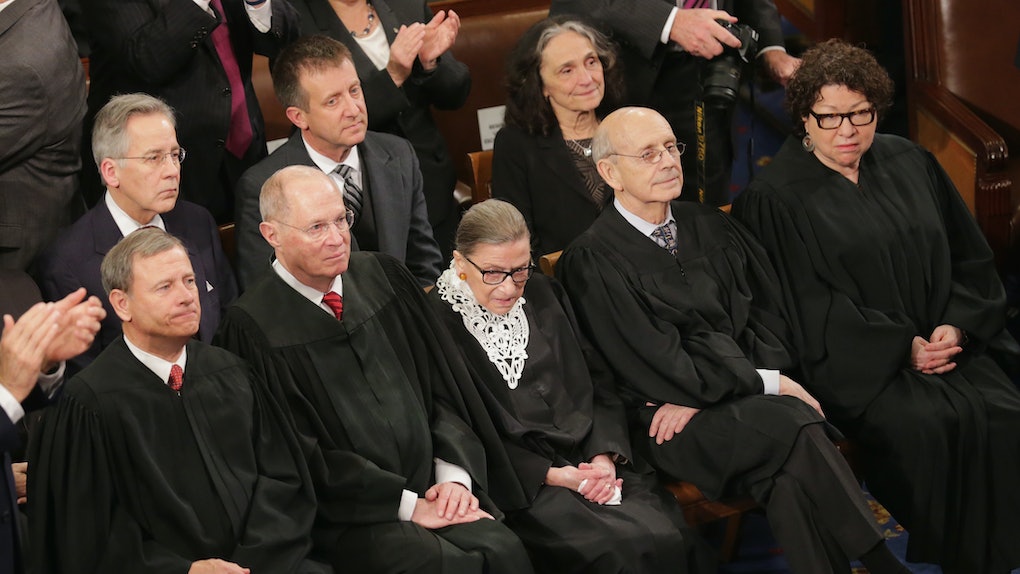 When President Donald Trump first announced potential restrictions on asylum laws in July 2019, the pushback was immediate. The courts, most notably in San Francisco, have been in a constant back-and-forth with the federal government in their best efforts to stop him. In a court ruling on Sept. 11, however, Trump was handed a major win, and these tweets about the Supreme Court's asylum decision show people are devastated.

On Sept. 11, the Supreme Court issued an unsigned order that allowed the administration to halt asylum applications for many Central American migrants. The order blocked a lower court's ruling and allowed the administration to deny asylum to migrants who have already travelled through another country en route to the United States and were not denied asylum there. Put simply, migrants may seek asylum in the United States only if they were unable to find it elsewhere first.

The ruling will apply primarily to Central Americans — such as migrants coming from Honduras, El Salvador, Guatemala, many of whom are fleeing violence in their home countries — who cross the borders of other countries on their way to the United States. It will also affect people from Africa, Asia, and South America, as they regularly first arrive at the southern border, according to the Associated Press.

District Judge Jon Tigar in San Francisco has made continuous efforts to bar the policy in states along the southern border. With the Supreme Court decision, however, the rule now applies nationwide, while other court challenges continue. Trump tweeted on Sept. 11 that the ruling is a “BIG United States Supreme Court WIN for the Border on Asylum!” Elite Daily reached out to the White House for additional comment on the ruling and the criticisms of it, but did not immediately hear back.

Of course, civil rights groups adamantly disagreed. Most prominently, the American Civil Liberties Union (ACLU) quickly responded to the news, saying, “This is just a temporary step, and we’re hopeful we’ll prevail at the end of the day.” Amnesty International called the asylum ban “cruel and unlawful,” and the legal immigration non-profit RAICES urged followers to fight back.

People on Twitter were quick to point out the ruling’s potential effects. One lawyer said the Supreme Court is "handing death sentences" to thousands seeking safety, while opinion columnist Greg Sargent, who responded to the ruling in The Washington Post, said it will “put untold numbers at grave risk.”

In her dissent, Justice Sonia Sotomayor said the Supreme Court is dangerously reversing years of U.S. policy that guarantees the right to seek asylum. “The rule the government promulgated topples decades of settled asylum practices and affects some of the most vulnerable people in the Western Hemisphere,” Sotomayor wrote. She was joined by Justice Ruth Bader Ginsburg in her dissent.

Others jumped in on Twitter to provide context, reminding people that this does not mean borders are closed or that the ruling will continue to last definitely. Since the ruling was a temporary order, it only remains in place while other cases work their way through the courts, per Vox.

However, it adds yet another logistical challenge to the thousands of people already at the border on waitlists to seek asylum. With Trump’s immigration policies, 45,000 people have already been turned back to Mexico to wait out their claims, per the AP.

Reps. Pramila Jayapal of Washington and Raul Grijalva of Arizona were among American politicians who condemned the ruling. In addition, Mexican Foreign Secretary Marcelo Ebrard spoke out against the ruling on Sept. 12. "Our policy of refuge, of asylum is a tradition in Mexico," he said. “The court’s decision is astonishing in the impact that it is going to have.”

Just like Sotomayor, lots of people are pretty shocked. A single ruling has left decades of asylum law in limbo, and this is a significant setback for immigration reform. Sure, the courts are sure to continue fighting back against the ruling, but in the meantime, Trump has the nation's highest court in his favor.