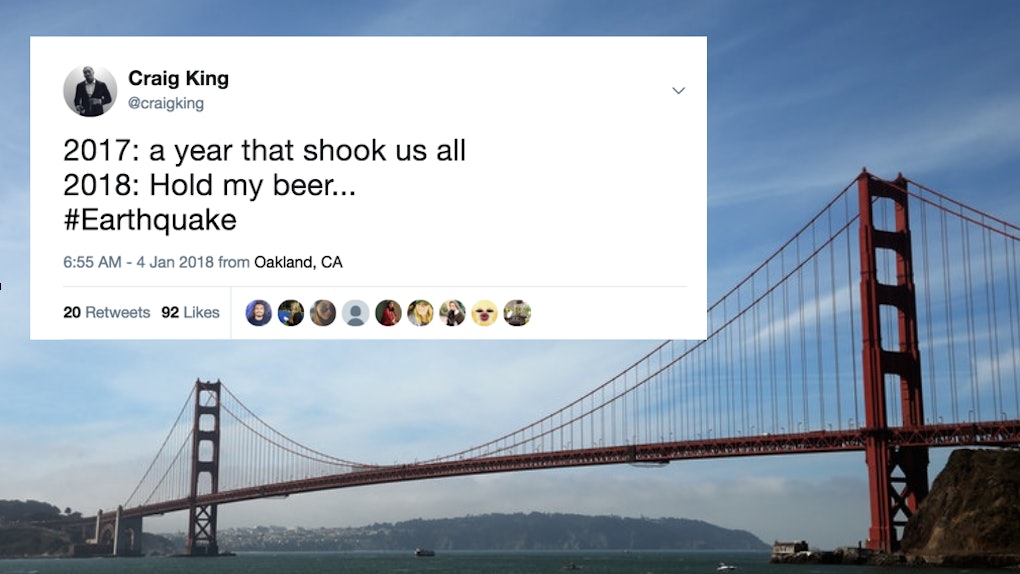 These Tweets About The San Francisco Earthquake Show How Shook Everyone Is... Literally

While the Northeastern part of the United States is snuggled up with extra blankets and heaters turned all the way up, the Bay Area woke up to a different type of gift from Mother Nature. San Francisco residents were rocked by a 4.5 magnitude earthquake early on Thursday, Jan 4. No damages or injuries were immediately reported. Because it's 2018 and nothing feels real until we put it on the internet, there were a ton of hilarious tweets about the San Francisco earthquake that left everyone feeling a bit, well, shook.

According to TIME, the earthquake’s epicenter was two miles from Berkeley, California. Residents in a number of surrounding areas reported feeling the quake in the middle of the night — not exactly an ideal alarm clock, even for California residents who might be used to them. The Los Angeles Times reported that the quake could be felt for five to 10 seconds. Additionally, its epicenter is in the area of the Hayward fault, which is one of the most feared fault lines in the Bay Area. The fault is capable of producing a magnitude 7 or greater earthquake and is also directly underneath a number of heavily populated areas. Thankfully, a magnitude 4.5 earthquake is not expected to cause major damage, but the location of the quake definitely makes it a little scarier.

Those who recovered from the initial fear of the quake quickly took to Twitter to let out all of their emotions. For those of us who have never experienced an earthquake, the tweets are hilarious and give us a bit of insight as to what they're like.

And we're so, so grateful. #EarthquakeTwitter

Many were totally unfazed by the quake.

It was a great opportunity to crack a few jokes.

And obviously, neither could we.

Others were legitimately frightened by the quake.

I would totally freak out if I woke up to my house shaking, so I can't say I blame them.

Jaded residents were just waiting for the aftershock.

Wait a second, you mean to tell me that the initial quake wasn't even the end of it?! Jeez, Californians, you live like this?

Mother Nature had some thoughts, too.

Or at least, Twitter tried to imagine what they would be.

Despite earthquakes in California being a regular occurrence, there's always someone else to blame.

How does that saying go? "When in doubt, blame the government," right?

According to The Los Angeles Times, the Hayward fault produces a large earthquake about every 160 years, with a margin of error of about 80 years. This seems like a long time, until you realize that it's been 150 years since the Hayward fault last ruptured and created a huge earthquake. Factor in the margin of error of 80 years, and it sounds like the Bay Area should be prepared for a huge earthquake at, um, every second. Sounds totally chill and not scary at all.

The sentiments shared by residents in the Bay Area echo the ones shared by citizens of Delaware last year. In November 2017, the state was hit with a 4.1 magnitude earthquake. This was obviously less intense than the one in San Francisco, but perhaps more intense considering the fact that it was in Delaware. (Jeez, Mother Nature, take your pick — snow or earthquakes, please don't give us both!) People as far as Connecticut and Virginia reported feeling the tremors, so basically, no one is safe. Who knows — maybe one day we'll all be part of #EarthquakeTwitter.