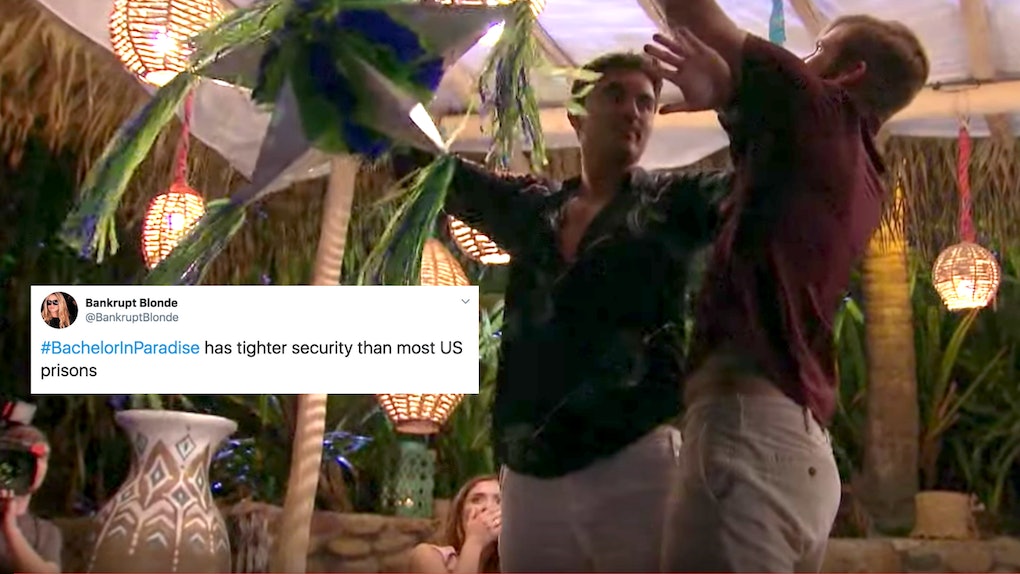 These Tweets About The Fight On 'Bachelor In Paradise' Will Make You Say "WTF?"

Bachelor in Paradise is supposed to be about finding love, but now that the tropical franchise is six seasons in, fans know big fights are inevitable. However, they were not prepared for the recent kerfuffle on Season 6, which was perhaps the biggest Bachelor blow-up ever. The previous week's tense episode ended on a cliffhanger, as Jordan confronted Christian, so the new episode on Monday, Aug. 19, picked up right in the thick of their piñata-centered fight on the beach. These tweets about the fight on Bachelor in Paradise capture Bachelor Nation's collective shock at the beachside brawl.

In case you needed a refresher on why Jordan and Christian started off the episode of Bachelor in Paradise in the middle of an all-out fight, it actually all comes down to Nicole and Clay. Christian entered Paradise during Week 2, which was something of a surprise since he was only on one episode of The Bachelorette. Notably, Christian did have beef with Jordan on their "Men Tell All" reunion, when Christian made cracks at Jordan about his modeling career.

Immediately, Christian became a center for drama on the beach. He took Nicole on his date, which fanned the flames of jealousy in Clay, since he and Nicole had grown very close already. Unfortunately for Clay, Nicole actually seemed to be very into Christian, even telling Clay she likes how Christian can be aggressive while she sees Clay as more passive. So, trying to step up to Nicole's challenge, Clay confronted Christian during one of his conversations with Nicole, asking him to give him some private time with her. When he refused, Clay went off to vent to Jordan, and Jordan saw an opportunity to get back at Christian for how he had been treating Clay, and perhaps for their earlier squabbles.

With his sights set on the piñata Christian had hung up for Nicole, Jordan sprinted over to grab the star-shaped surprise. But Christian jumped up and stopped him, and things very quickly escalated into an all-out fight as Jordan body-slammed Christian to the ground. In light of the fight, Jordan posted a cheeky tweet about it referencing Christian's lion tattoo.

The fight actually ended very abruptly, as a horde of producers and bodyguards immediately appeared and pried Jordan and Christian apart. While Jordan seemed content to end the fight, Christian was very obviously fighting back, even breaking free for a moment to hit a full sprint towards Jordan before getting apprehended once again.

Of course, Bachelor Nation was living for the blow-up. Check out some of the best tweets about Jordan and Christian's fight:

Although the fight only lasted for about a minute, it had some serious ramifications. Chris Harrison came to the beach to tell everyone that due to Bachelor in Paradise's zero-tolerance policy on violence, both Jordan and Christian were sent home.

One seemingly positive outcome, though, is that Nicole finally came around to Clay once again after seeing Christian lose control in the fight. It looks like Nicole and Clay could really make it to the end together now.