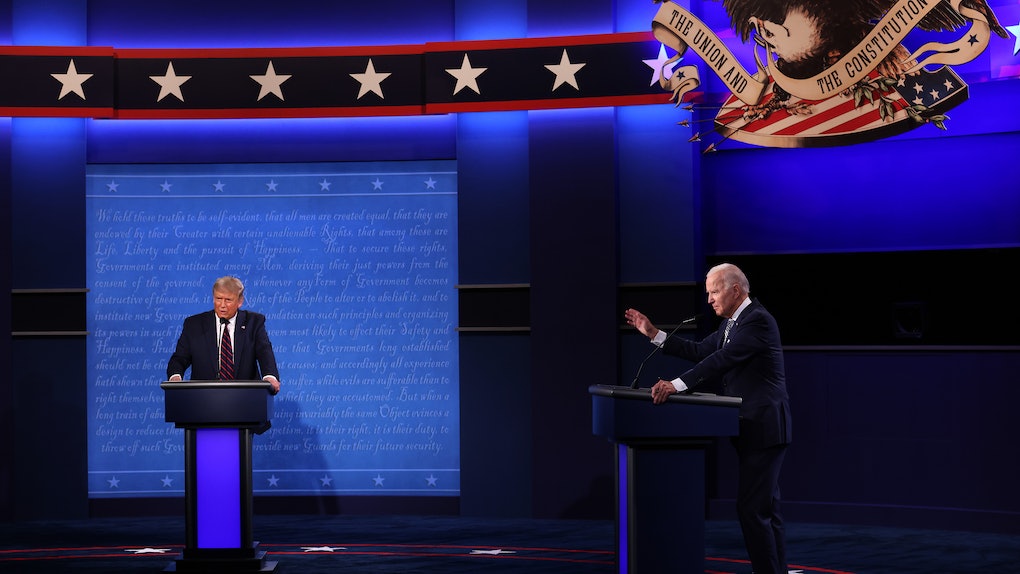 On Tuesday, Sept. 29, President Trump and Democratic presidential nominee Joe Biden headed to Ohio for the first of their scheduled debates. Considering the pair have had no shortage of comments and critiques about the other over the past few months, viewers were eager to see the political figures debate their relative agendas and explain their visions for running the country over the next four years. However, everyone was... disappointed. These tweets about the "dumpster fire" first debate shows viewers were appalled about the "hot mess" that took place on live television.

National attention to the debate had only amplified in the days leading up to the debate following The New York Times' bombshell expose of Trump's tax returns over the past decade. In addition to paying only $750 in income taxes in 2016 and 2017, he avoided paying any income taxes the ten years prior by claiming business losses, according to the report. In a statement to Elite Daily, the White House called the story "fake news" and a "politically-motivated hit piece." During the debate, Biden didn't fail to bring up the report's damaging findings, simply asking the president "when?" when Trump said the public would have access to his taxes "soon." Other big topics on the docket were President Trump's handling of the coronavirus pandemic, the economy, law enforcement, and climate change.

However, the debate quickly descended into a mess of name-calling and personal attacks as Trump frequently interrupted the moderator, Chris Wallace, and Biden. During the debate, the incumbent took his own shots at his opponent, questioning Biden's intelligence at one point. He even attacked his son, Hunter Biden, during a moment when Biden was speaking about his late son, Beau, who died of brain cancer in 2015. Many viewers also noted that when Wallace asked him directly, Trump once again refused to directly condemn white supremacist groups, instead telling them to "stand down and stand by."

It was a train wreck that had people from both sides of the political spectrum feeling the only losers were the American people. While the candidates were verbally sparring on stage, viewers took to Twitter to air their thoughts on the debate.

Even the professionals were appalled. The anchors for CNN's post debate coverage didn't hold back their dismay. "That was a hot mess, inside a dumpster fire, inside a train wreck," said CNN's Jake Tapper.

"That was a sh*tshow," agreed CNN's Dana Bash.

Judging from their inaugural debate, it's clear the pair isn't holding back — to say the least — when addressing their differences and defending their own stances on major issues. When the subsequent presidential debates air on Oct. 15 and Oct. 22, hopefully viewers will get more clarity on where the candidates stand as they argue immigration, health care reform, social justice reform, policing, and more. Get ready.