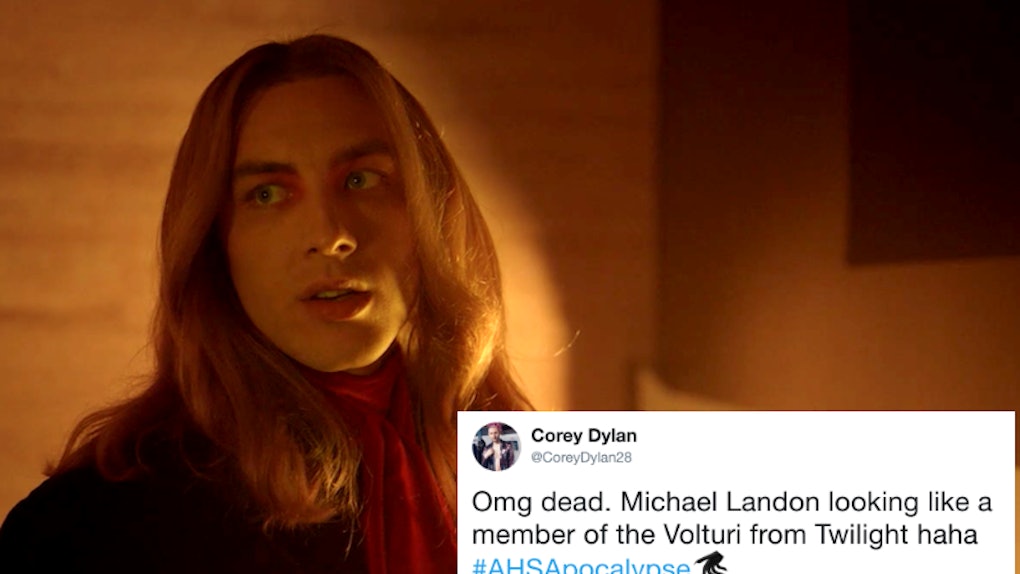 In its premiere episode, aptly titled "The End," American Horror Story: Apocalypse immediately lived up to its name by showing Earth enveloped in a nuclear apocalypse, with only a handful of people surviving in underground outposts. Twitter been exploding right away, when the first several minutes of the AHS premiere immediately showed the world erupting in nuclear explosions as only a small group of four Los Angeles natives were able to board a plane to safety.

In the 10 or so minutes before the opening credits, we see socialite Coco St. Pierre Vanderbilt (Leslie Grossman) get a warning from her father that this is the apocalypse, and she manages to save her assistant Mallory (Billie Lourd), hairdresser Mr. Gallant (Evan Peters), and his grandmother Evie Gallant (Joan Collins) by taking her out-of-the-country family's four spots in an exclusive underground outpost. And as the nuclear destruction was raining down, Twitter was exploding as well:

But things only got even more wild after the nuclear holocaust. As the missiles were dropping, a select group of people were able to make it to a mysterious underground safehouse called Outpost Three. This outpost is run with a very firm hand by Sarah Paulson's Wilhemina Venable and her muscle, Kathy Bates' Miriam Mead. As our survivors begin to arrive, we learn that many of them were selected for some special genetic quality that they possess, and Ms. Venable explains that the outpost is divided into Purples (the lucky few selected to survive in comfort) and Grays (basically slaves to the Purples).

And getting to know how Outpost Three works caused a lot of stir on Twitter, of course. Check out some more of the best tweets from the AHS: Apocalypse premiere:

At the very end of the episode, we finally got our first look at one of the iconic Murder House characters coming back, as a grown-up Michael Langdon saunters into the outpost, dropping the news that he is able to save any inhabitants that he sees fit. We last saw Michael when he was just a demonic baby antichrist, but he is just as creepy as an adult. Viewers know that even more Murder House and Coven characters will arrive in the future, but no other ones appeared in the premiere episode.

More like this
These Tweets About Regé-Jean Page Leaving 'Bridgerton' Are Royal Bummers
By Cianna Garrison
Here's How To Vote For The Next 'American Horror Story' Theme Among 6 Options
By Cianna Garrison
Katie Thurston's 'Bachelorette' Season 17: Cast, Premiere Date, & More Info
By Abby Monteil
Stay up to date