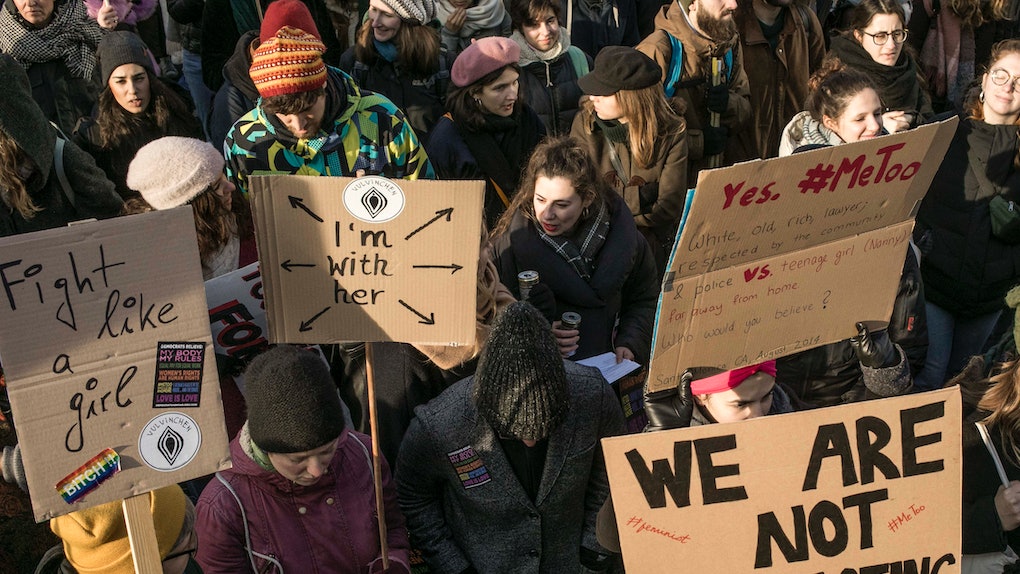 On Saturday, Jan. 19, the Women's March returned to the nation's capital and all across the world for its third annual show of female solidarity and strength. In conjunction with the anniversary of President Donald Trump's inauguration in 2016, thousands of protestors headed to Washington, D.C. to kick off the official event with rallies, signs, and marches. Considering that the original Women's March in 2017 made history as the biggest day of protest in the United States' modern history, it was exciting to see that the #WomensWave is still going strong three years later, and these 2019 tweets about the 2019 Women's March show that the future of the annual protest is hopeful.

The Saturday, Jan. 19 event started the day of protest with a more uplifting message and a more focused future plan of action than that of the past two years, no doubt propelled by all the women who were elected to office during the 2018 Midterm elections. Before the march, the organizers behind the event released an official statement where they revealed that they were heading back to Washington D.C. this year "with an agenda" in light of the empowering results from the past few months:

The 2017 Women’s March inspired hundreds of women to run, millions more to vote, and dozens to win elected office. The 2019 Women’s March marks two years of resistance to the Trump presidency, two years of training new activists, and two years of building power. And this time, we're coming back with an agenda.

The statement continued, "On January 19, 2019, we’re going to flood the streets of Washington, D.C., and cities across the globe. The #WomensWave is coming, and we’re sweeping the world forward with us."

While 2018 was a dark and confusing time when it came to the political sphere overall, the historic results of the November Midterms seemed to suggest that change is in the air. In addition to the fact that the American people elected their most ethnically and racially diverse Congress yet, a record 42 women were chosen as incoming members of Congress. Progressive heavyweight Alexandria Ocasio-Cortez became the youngest woman to be elected to Congress, while Sharice Davids and Deb Haaland became the first Native American congresswomen, and Ilhan Omar and Rashida Tlaib became the first Muslim congresswomen. In addition, Massachusetts and Texas had their first black and Latina congresswoman with the election of Ayanna Pressley and Veronica Escobar.

"From one woman in Congress to 131 = 102 years. We need twice that to get to parity. So as we march this weekend and every day forward, let's not forget to empower and support the young women and girls around us. They are the key. #WomensMarch2019"

This year's Women's March was a celebration and acknowledgement of that milestone, and the Twitterverse took to the social media platform to express their excitement of the election and as well as how far women have come on Jan. 19.

While the original intent of the 2017 Women's March was to protest Donald Trump's election to the presidency and band together in solidarity for women's rights, it looks like the movement is slightly shifting its agenda away from one individual and towards building upon the political advances that are being made by women at the nation's capital.

Rep. Alexandria Ocasio-Cortez echoed these sentiments as she addressed a crowd gathered in New York City. "Last year we brought the power to the polls and this year we need to make sure that we translate that power into policies," she said.

Judging from the videos and tweets about this year's march, it looks like the momentum of the Women's March isn't going anywhere.