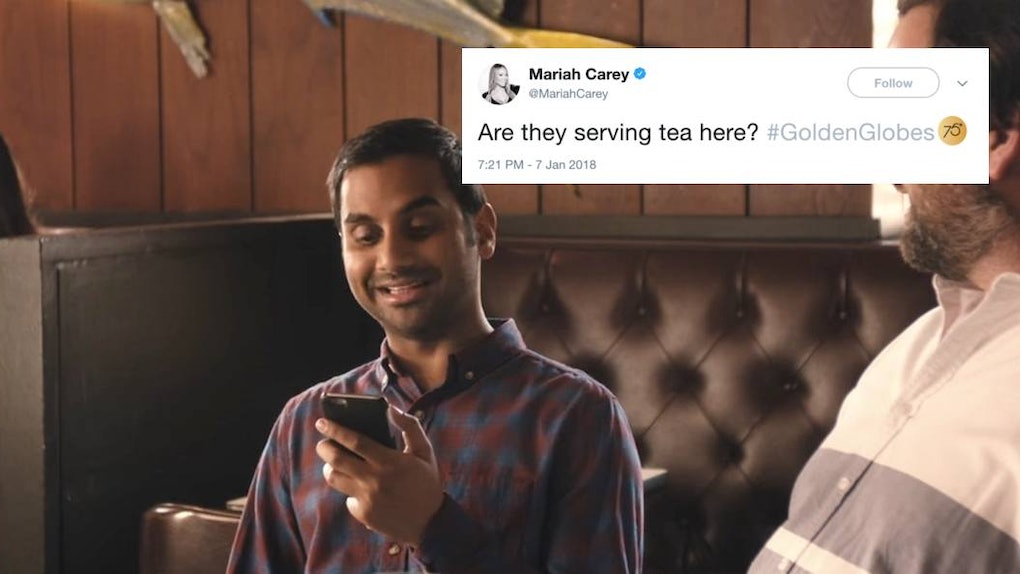 The 2018 Golden Globe Awards are finally here, and you guessed it: The internet's got jokes about it. While Seth Meyers was hosting one of the biggest awards nights in Hollywood on NBC, the real fun was going down on Twitter, where movie and TV fans everywhere were posting the funniest jokes, memes, and reactions to the Golden Globes. Check out the best tweets about the 2018 Golden Globes below to be sure you saw all the hilarity that the night had to offer.

Obviously, the first big moment of the Golden Globes is always the host's intro and monologue. Seth Meyers hosted the show for the first time this year, taking over from past Saturday Night Live alum and comedian-hosts Jimmy Fallon, Tina Fey, and Amy Poehler. Before the ceremony began, Meyers teased how he would deal with the particularly volatile current events of this past year in his opening monologue to People, saying that he would focus on the internal politics of Hollywood that have become even bigger than the movies and shows they produce this year, following exposé's on powerful men in showbiz, like Harvey Weinstein, Kevin Spacey, Louis CK, and others.

True to the politically conscious and current brand of humor he employs on his late-night show, Seth Meyers managed to handle weighty topics with a cleverness and wit that still got viewers laughing. Twitter was all over Meyers' intro (especially Amy Poehler's hilarious surprise appearance), and of course, the social media site also blew up about all the other major moments of the night, including Nicole Kidman's big win, and some cheeky celebrity jokes.

Check out the best tweets from the Golden Globes below:

Let's take a quick break here before we continue with even more hilarious tweets about the night below. Some of the standout moments from this year's Golden Globes ceremony that inspired the best Twitter content included Amy Poehler's bit during Seth Meyer's opening monologue, Tommy Wiseau finally getting his moment on the Golden Globes stage, and of course, the adorable antics of the Stranger Things cast.

During his monologue, Seth Meyers included his classic Late Night bit "Things Seth Can't Say," bringing in actors in the audience to tell some particularly pointed jokes about this year in Hollywood. Of course, Amy Poehler stole the show right when she appeared on screen, hilariously shutting down Seth's "mansplaining" and adding that she is "reclaiming her wine." Later in the show, another commanding presence stole all of our attention when James Franco invited Tommy Wiseau, the subject of his movie The Disaster Artist, to come on stage during his Best Actor acceptance speech. Wiseau is the man behind what has been famously dubbed the worst movie ever made, and lamented for years about how he was not invited to the Golden Globes after The Room's initial release. But on Sunday night, Wiseau was finally able to live out his dream.

OK, now let's jump into tweets from the second half of Golden Globes night!

Of course, nothing from the night could live up to Oprah Winfrey's insanely inspirational speech. The television legend took to the stage as the recipient of the Cecil B. DeMille award and delivered an impassioned speech about the #MeToo and Time's Up movements, which you can watch in full below. Twitter was quick to make jokes about Oprah running for president in 2020 as well.

Other standout moments included Reese Witherspoon's gushy introduction to Oprah's speech, and Natalie Portman calling out the fact that there were no women nominated for the Best Director award. Check out all of the best tweets from the night above.