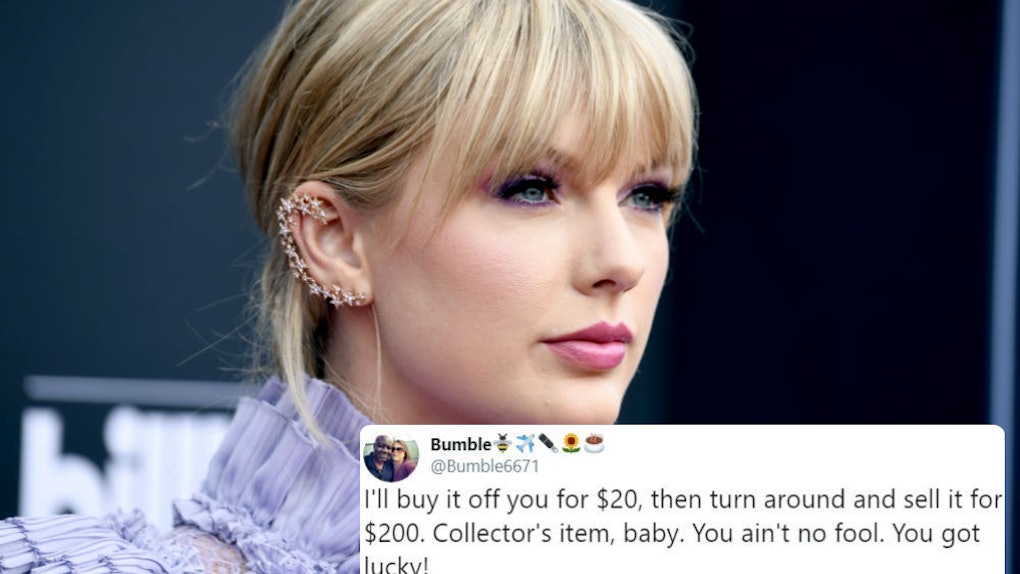 These Tweets About Taylor Swift's "ME!" Merch Typo Are So, So Hilarious

Swifties everywhere are losing their minds. That's because their T-Swift gear has a spelling error. Yep, and the tweets about Taylor Swift's "ME!" merch typo are as entertaining as you'd imagine, with fans ranging in emotions from upset to well, entrepreneurial (more on that later).

The typo is featured on a $45 limited-edition shirt with the phrase "Your'e the only one of you, baby that's the fun of you." The apostrophe is clearly in the wrong spot, but seeing that the font places the letters so close together, the mistake is also very easy to miss.

That's probably how one fan didn't even spot the hiccup until after wearing the shirt for a month.

The fan posted a photo of the "Taylor-made" pullover (get it? Just me, OK...) on Wednesday, June 5, noting they had just noticed the error.

"EXCUSE ME! I've had this shirt for nearly a month and you're telling me it's had a typo THIS WHOLE TIME!!" wrote @SavvyStardust on Twitter.

Of course, other fans decided to check on their own "Taylored" threads (OK, last one...) to find the same flaw staring right back at them.

What makes the situation all the more hilarious is that the pastel-colored merchandise is specifically made for Swift's song "ME!" featuring Brendon Urie from Panic! At The Disco. The song contains lyrics that read as follows:

You know what there also is? An apostrophe in the wrong spot on the Taylor Swift gear.

Oh, the irony! How does that even happen? It's probably not the 29-year-old singer's fault, but the Twitterverse is full of emotions.

Some were in utter disbelief.

Others speculated whether the mistake was actually an Easter egg.

Or, perhaps an invitation to Taylor's secret sessions.

One user thought it made them look bad.

One fan tried to resolve the situation for fellow-frustrated Swifties.

While those with a business-savvy spirit saw the egregious mistake as a future cash cow.

Though, one fan made sure to point out they received an error-free diamond in the rough.

Purchases made from Swift's special line of merchandise with rose-patterns and pastel-colored tote bags, hats, and blouses engraved with lyrics from the hit song "ME!" are said to include a digital download of her forthcoming album.

However, fans can rest assured that the album will have a lot of ear candy to offer. In contrast to her darker sixth studio album, Reputation, number seven will be more "playful," according to Entertainment Weekly. She also told the publication, "There’s a lot of a lot on this album. I’m trying to convey an emotional spectrum. I definitely don’t wanna have too much of one thing…. You get some joyful songs and you get the bops, as they say."

Unfortunately, Swift's untitled seventh album is yet to set a release date, so anticipate singing "Spelling is fun" until further notice.