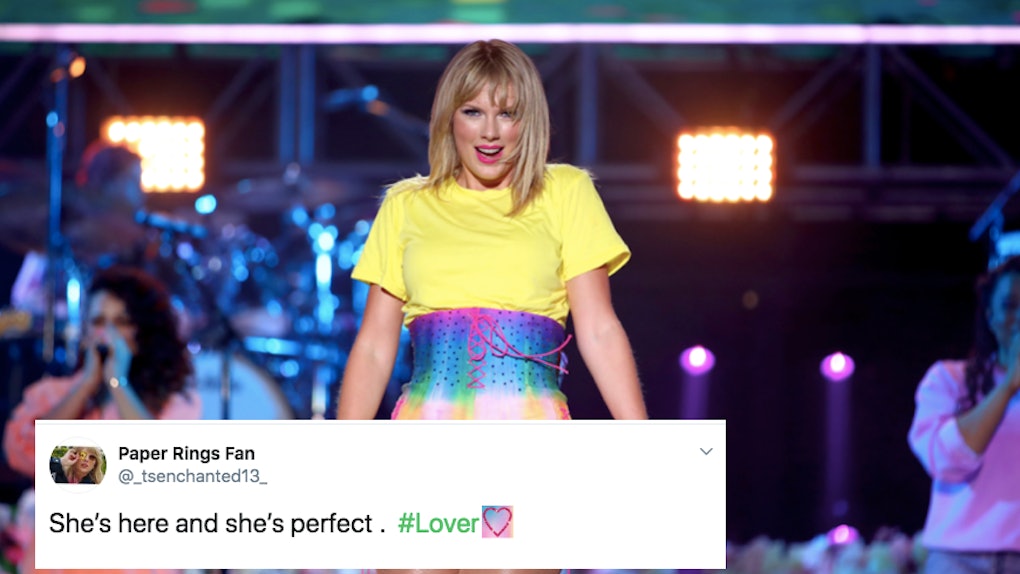 These Tweets About Taylor Swift's 'Lover' Album Will Give You Life

Swifties! It feels like it's been eons since Taylor Swift announced her seventh album Lover, and she's been breadcrumbing us like my last Tinder date. She dropped "The Archer" on July 23, teased the release of the title track on Aug. 11, and then blessed us with the new song on Aug. 16. Whew, a lot of breadcrumbs. But alas, what we've all been waiting for is finally here and that's why these tweets about Taylor Swift's Lover album show some major love for the songstress.

In July 2019, Swift announced on Instagram Live that Lover would be her most vulnerable album to date and it really is. She sticks it to "The Man," she admits her own faults in "The Archer," and she even seemingly wrote a love letter to her British bae Joe Alwyn in the title track. If that's not vulnerable, I don't know what is. Lover is truly a work of art and her fans know it. Like, they can't keep it together. Yo Swifties, "You Need To Calm Down." (Sorry, I had to do it.)

But seriously, fans don't know how to act since it's been nearly two years since the last Tay Day. FYI, that's the name I've created for the days when Swift drops an album. The last album that we got from Taylor was back in November 2017, when she released Reputation. The dark and brooding collection of songs was a pretty big stray away from the Swift that many fans know, but Lover is bringing us all back to those rainbows and butterflies. Swifties are buzzing all over the net, and fans on Twitter can barely contain their excitement.

Some can't help but comment on their favorite songs. There are so many good ones to choose from ("Paper Rings" and "The Archer"? Both so good!). But here are a few fan favorites!

Others in the Taylor-lovin' Twitterverse are noting how meaningful this album is. In a tweet, Swift has been vocal about this being the first album she's ever owned, and that it's "a celebration of love, in all its complexity, coziness, and chaos." Check out what fans had to say about its depth, below.

Oh, and some even think Swift's latest creation could ultimately end up winning Album of the Year. Every song is a total bop, so fingers crossed, fam!

Fans are also loving Swift's new music video for "Lover." Decorated with bright colors and romantic lighting, a loving Christian Owens, and the vision of Swift's future family, there is seriously just so much to love. Definitely check it out for yourself, if you haven't already.

I think I speak for — well — quite literally everyone in the Twitterverse, when I say that "Lover" is everything I had hoped it would be. Fans are ogling over it, and I seriously hope they're right about her winning Album of the Year... if anyone deserves that highly coveted award, it's totally T. Swizzle.