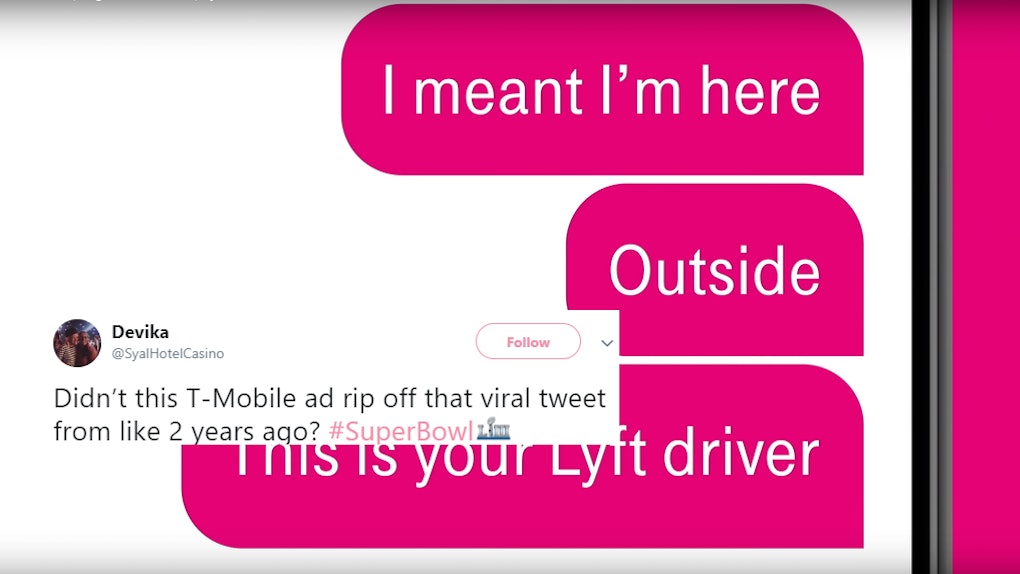 Is T-Mobile ripping of internet memes for their new Super Bowl commercials? Well, a lot of Super Bowl fans seem to think so! Apparently, the company has recycled some old social media memes to create really basic TV spots that may make you chuckle, but are uninspiring at best. While the commercials may or may not prompt new business, they are definitely giving social media users reason to tweet their frustration over the company using recycled content for their commercials. These tweets about T-Mobile ripping off memes will probably make you laugh.

UPDATE: According to T-Mobile, the company actually hired the writer of the original meme, @decentbirthday, to license the Lyft spot during the Super Bowl.

EARLIER: So, let's start at the beginning: a few years ago, someone shared a meme where an Uber driver was mistaken for a supportive friend.

"I am here for you," the Uber driver's text message said, to which the recipient responded that they'd been going through a rough time. The Uber driver then revealed their identity in an effort to explain that they were not a random supportive friend, but simply a driver waiting downstairs to pick them up.

The meme, of course, made its rounds on social media and apparently found its way to T-Mobile because the company's Super Bowl commercial was a nearly exact replication of the conversation in the meme. Yikes! Needless to say, fans aren't terribly happy that T-Mobile and its partnering company Lyft have used old content in an attempt to be relatable. People are tweeting left and right about the fiasco. Here are some tweets roasting T-Mobile for ripping off memes:

Clearly, people are not impressed with T-Mobile's Super Bowl efforts this year. Not only does the ad seem totally unoriginal, but the company probably spent a whole bunch of money hiring marketing and content strategists whose best efforts were to swipe already existing content from the internet. In truth, that sounds like a big a waste of money. But if you wanted to look at the bright side of things, people are definitely talking about the ad. So, while it might not be the most original and thought-provoking ad, it's on people's minds. And that's probably more than T-Mobile could have hoped for.

In any case, here's a look at the ad in question so you can judge for yourself whether it's unoriginal:

So, now that you've seen it, what do you think? Is it unoriginal or extremely clever? I mean, it's basically word for word from the original source material, so it's an odd choice, to say the least.

All in all, though, T-Mobile seems quite proud of their efforts. T-Mobile CEO John Legere is currently tweeting about the company's partnership with Lyft, so he's a happy guy.

And the official T-Mobile and Lyft accounts are basically flirting with each other on Twitter right now:

All that said, I think it's safe to say that T-Mobile and Lyft are quite happy with the result and with their social media prowess... even if they did happen to swipe some memes off the internet and call them ads. I'm sure people will be talking about the ad for a while. Super Bowl fans seem so impassioned in their discussions already, so I think T-Mobile will likely consider that a success.

More like this
These Tweets & Memes About The Purple iPhone 12 Are Seriously Hype Over The Hue
By Lara Walsh
In 'Riverdale' Season 5, Toni Topaz Is The Black Superwoman Without A Cape
By Erika Hardison
These Tweets About Prince Philip's Death Will Break Royal Fans' Hearts
By Jonathan Borge
Stay up to date