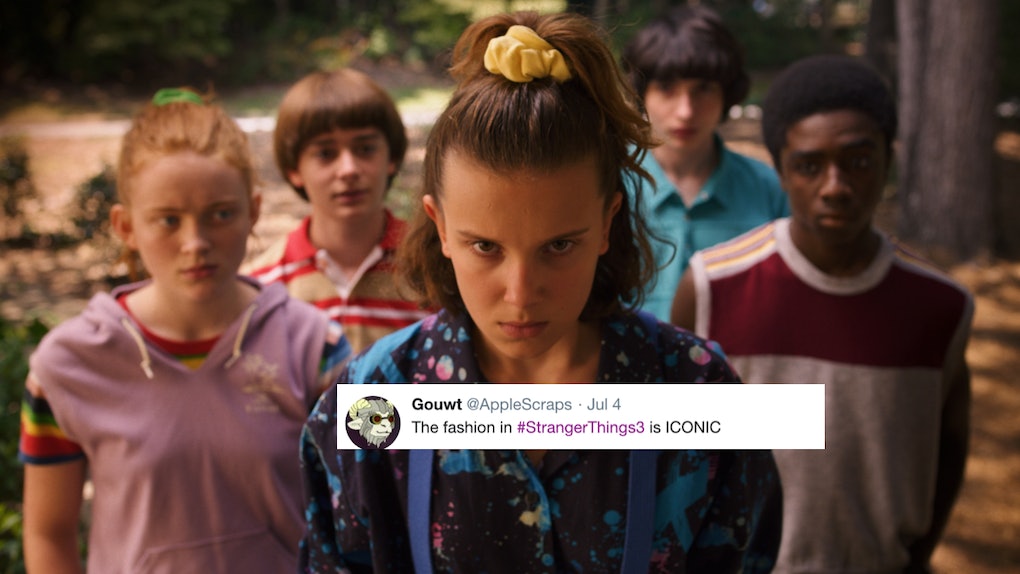 Stranger Things Season 3 is officially here, and with it comes a heaping dose of 1980s nostalgia. The new season of the hit Netflix series offers plenty of fun details for nostalgia-lovers. Amidst all the monster-fighting and conspiracy-chasing, there countless references to the '80s, from popular TV shows of the time to the short-lived '80s-era New Coke. But, there's one aspect of the '80s that Stranger Things Season 3 gets so right, fans can't stop talking about it: the fashion. These tweets about Stranger Things Season 3's fashion make it clear that fans are all about the '80s.

Stranger Things has always heavily leaned into its '80s aesthetic, but Season 3 puts '80s fashion front and center. In the summer of 1985, the town of Hawkins, Indiana, has found a new hangout spot in the Starcourt Mall. That means that fans are treated to several scenes of the kids shopping for spectacular '80s fashions. Episode 2 even includes one of the best shopping montages ever when Eleven (Millie Bobby Brown) and Max (Sadie Sink) go on Starcourt spree. They show off a wide array of period-perfect clothes, but they're not the only characters to show off their sartorial flair. Fans are taking note of the wildly colorful style all the characters display in Stranger Things Season 3.

Max and Eleven's shopping spree, in particular, is getting a lot of love from fans on Twitter. The montage radiates with the girls' joy over getting to explore their style, and that happiness is easily contagious to the audience watching.

During the shopping montage, Eleven picks out a playful romper that has caught a lot of fans' eyes.

There's some good news for fans who are truly dedicated to bringing '80s fashion into their own lives. The exact same romper that Eleven picks out at the Starcourt Mall is now available at Target, so now fans can rock Eleven's style. Unfortunately, the romper doesn't give fans access to all of Eleven's powers too, but you can always try to practice telekinesis while wearing it.

While a lot of fans are celebrating the bold patterns and big shoulders of Stranger Things' '80s fashion, other fans are acknowledging that '80s fashion wasn't all good.

After all, the 1980s gave the world clashing colors, weird hemlines, and fanny packs. One especially egregious fashion detail is the very, very short shorts the boys wear throughout the season.

But, if there's one standout fashion choice from Stranger Things Season 3, it's the flashy shirt Jim Hopper (David Harbour) wears for much of the season.

Some fans are getting a real "hot dad" vibe from Hopper's mustache and shirt-tucked-into-jeans look.

Then there are those fans who want to take their fandom to the next level by not only appreciating Hopper's shirt, but also by wearing it themselves.

One fan realized she already owns an '80s-style shirt with a very similar vibe to Hopper's:

The '80s may have come and gone, but the era lives on in a strong way in fashion. It looks like Stranger Things is inspiring whole new generations to appreciate the decade's memorable style.

More like this
This 'Stranger Things 4' Theory About Eleven's Past Is Super Dark
By Ani Bundel
These Tweets About Beyoncé On Netflix's 'Selena: The Series' Are Too Much
By Dylan Kickham
Is Jesper A Grisha In 'Shadow And Bone'? This Tiny Detail Could Be A Hint
By Dylan Kickham
Stay up to date