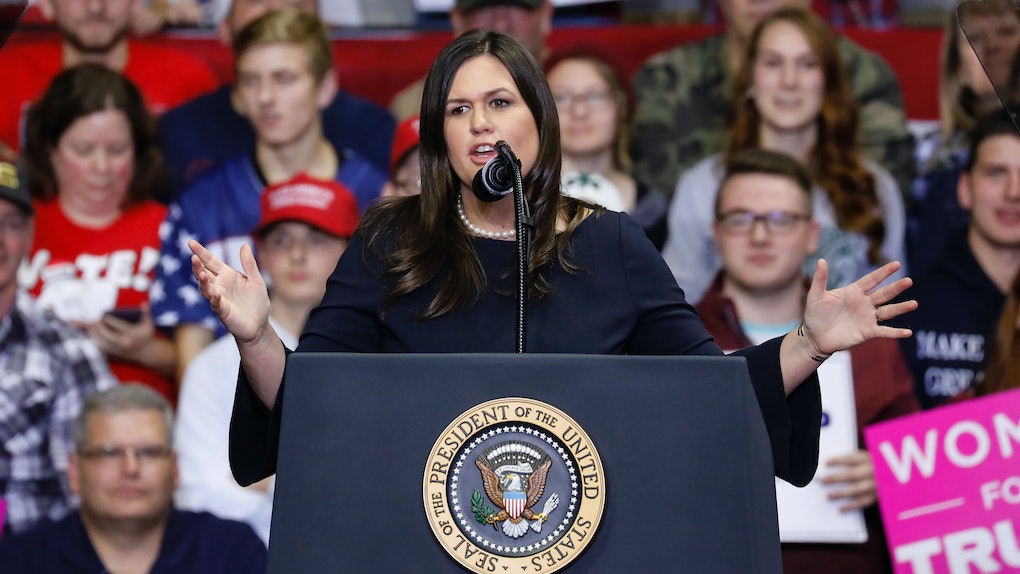 On Thursday, Feb. 14, the White House released a statement about how President Donald Trump plans to move forward with funding for his long-sought border wall as Congress is moving forward on legislation to keep the government funded without meeting his $5.7-billion request for funding. But the manner in which White House press secretary released a statement has immediately drawn backlash on Twitter. These tweets about Sarah Sanders' border wall deal announcement are all freaking out over the same two things.

"President Trump will sign the government funding bill, and as he has stated before, he will also take executive action — including a national emergency — to ensure we stop the national humanitarian crisis at the border," Sanders shared in an image of a statement tweeted Thursday. "The president is once again delivering on his promise to build the wall, protect the border, and secure our great country." The drama over funding the government and declaring a national emergency is one thing, but the statement itself was causing upheaval.

First, Twitter was not happy with the fact that it appears that the press secretary, Sanders, sent the statement as a screenshot of the Notes app on iPhone. Elite Daily reached out to the White House to confirm that this was the method Sanders used to present her statement and the backlash around it, but did not hear back as of publication.

"You are declaring a national emergency on the iPhone Notes APP???" one user replied to Sanders' tweet. "The notes app? You're embarrassing," wrote another user. A flurry of similar comments streamed in.

"He's been slow-rolling this fake "emergency" for six weeks now and you had to rush out the announcement on your iPhone's Notes app?" another tweeted.

"Are you issuing press statements via the Notes app now? Classy," added another.

Multiple people seemed astounded that the secretary had not just issued an official statement on her iPhone, but that it was for something as serious as a national emergency. "How much of an emergency can it be if it's being declared via Notes App?" added one.

More and more responses poured in.

"[A] national emergency getting declared via the notes app feels like a new level for something normally used for celeb apologies," another tweeted.

Some users were also not thrilled with the method of announcement given what appeared to be a smudge on the press secretary' screen, which had the appearance of a mysterious black dot over the word "delivering."

"That damn dot on there is driving me crazy," one user wrote.

Several people were relieved to realize that the dot was seemingly on Sanders' screen, apparently having been under the impression that there was an issue with their own screen.

Some users theorized that the dot got added into the screenshot while Sanders was cropping it to upload into the tweet. Oh, technology.

In the end, it wasn't clear if in had or why the press secretary had sent a statement through her iPhone's Note app, but it sure looks that way. So as with Trump's own penchant for using Twitter as an official White House platform, we may need to get used to his press team using apps to deliver major news. As one user summed it up: "What a time to be alive."