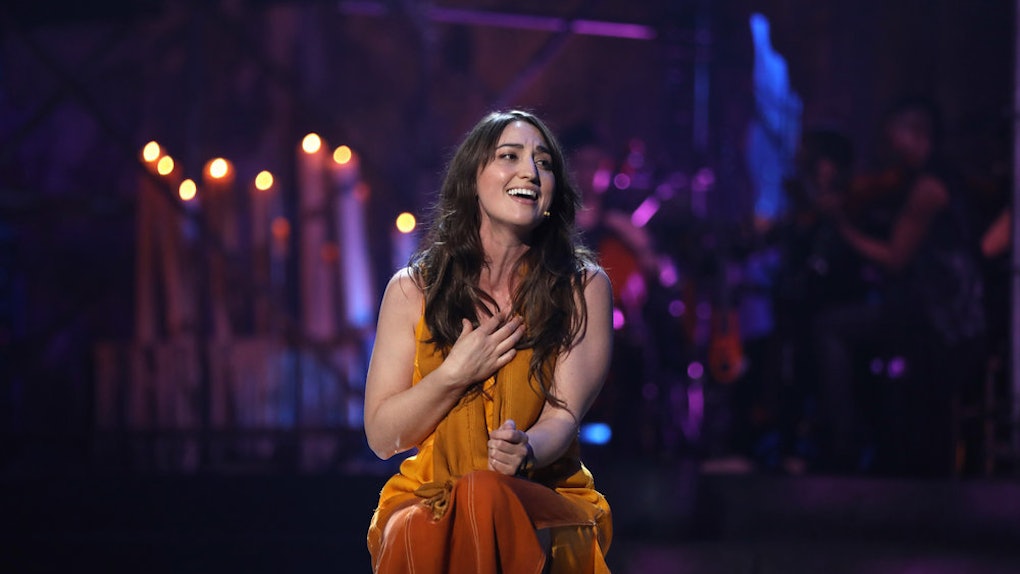 Grammy winner John Legend may be playing Jesus, but these tweets about Sara Bareilles in Jesus Christ Superstar Live prove that she's stealing the show. The pop singer is portraying Mary Magdelene in the NBC produced live performance, and everyone is totally in love. Honestly, same.

Even though John Legend playing Jesus is one of the most anticipated portrayals of the show, Sara Bareilles is totally blowing us all away with her portrayal as Mary Magdelene. I knew she could sing, but it was her rendition of her solo "I Can't Make Him Love Me" that literally left me in tears. Of course Bareilles isn't a stranger to the stage, having starred in and written the hit musical Waitress.

I don't think I'm the only one who thinks Bareilles is a total natural on that stage, but believe it or not she's been battling some nervous leading up to the show. On March 30, Bareilles chatted with E! News about the upcoming performance, and the pressure she's been feeling.

I can't help but feel the pressure that this is a one-time live event. A lot of pieces have to be in place for this to come to life, but I'm so excited. I love this show, I grew up on this music. It feels like a great thrill of my career that this opportunity arose, it's really amazing.

No Sara, you're really amazing. Everyone agrees. Even Chrissy Teigen, whose husband John Legend is starring, is totally mesmerized by her performance.

Plus, people are throwing out some ingenious puns every so often.

Bareilles has been a longtime fan of Jesus Christ Superstar growing up. During an interview with Billboard on March 30, Bareilles not only praised the musical's score and message, but also said that Mary Magdelene is an inspiring woman to depict for this performance.

The subject matter is personal for so many people. The score is undeniable – it’s something I was introduced to as a young girl. Mary Magdalene is a powerful and important historical figure and I love how she’s portrayed in the show. She’s a feminist icon. Getting to sing these songs – which happen to be some of my favorite musical theater songs – is a privilege.

We're all in awe of Bareilles, but the entire Jesus Christ Superstar Live show is absolutely incredible. NBC is no stranger to turning a hit broadway musical into an incredible one-night television extravaganza. The network has also produced Hairspray Live and Sound of Music Live, to rave reviews. So, judging from these tweets, NBC can check Jesus Christ Superstar Live off the list of successful projects.

Prior to this performance, Bareilles just finished her second run starring in her musical Waitress. Not only does she star, but Bareilles also wrote all the songs for the hit show. Goals. Broadway musicals have dominated music charts recently. From Hamilton to Waitress, more mainstream musicians are getting their feet wet in the historical music genre, and are introducing artists to the magic of this live experience.

While speaking to Billboard, Bareilles talked about her her hopes for broadway, and that she hopes her performance in Jesus Christ Superstar will inspire more audiences to embrace musical theatre.

I’ve had so many people come to see Waitress who have never been to a musical before, and they feel like they’ve been introduced to a whole new world. I hope people will get to discover the incredible canon of musical theater.