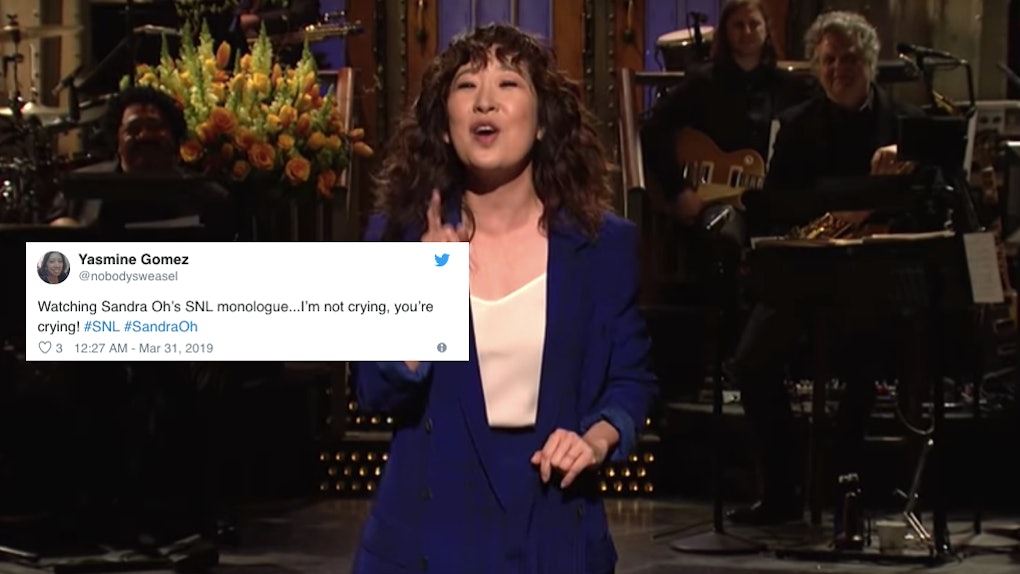 After several years of slaying the game as a TV star, Sandra Oh has an incredibly extensive fanbase. Her latest role as a British spy on Killing Eve has proved to be a huge success (they just released Season 2!), and of course, she nailed it as Dr. Cristina Yang on Grey's Anatomy (just thinking about it makes me cry, LOL). For real — nobody can deny that Sandra Oh is a ridiculously talented actress. And based on these tweets about Sandra Oh hosting SNL during the March 30 episode, it looks like she also happens to be a really solid TV host as well. In all honesty, though, I am definitely not surprised.

While getting the chance to host Saturday Night Live can easily get to your head, Oh focused her monologue on the fact that she can't take a compliment and constantly apologizes. She jokingly attributed that to the fact that she is Canadian. Oh had a hilarious bit with Leslie Jones about her tendency to self deprecate before confidently wrapping it up saying, "I'm Sandra Oh and I'm hosting Saturday Night Live." If you haven't already watched her short (yet super sweet) monologue, like, a hundred times, make sure to check it out here.

OK, that was adorable, right? No complaints here.

Oh proceeded to show off her sense of humor by playing roles like Tishy, Mikey Day's teenage character's future girlfriend with a Four Loko habit, a victim of a Victorian-era duel, and Kim Jong Un's translator.

Of course, SNL went into the Mueller report and Barr's summary that was released last week, but fans seemed more interested in Oh showing off her comedy chops. Overall, fans seemed to enjoy this episode with Oh at the helm. I

As you probably would have imagined, Oh's opening monologue definitely generated a lot of positivity. She looked fantastic, and she is a total inspiration. Plus, it touched the hearts of Canadians everywhere.

Some out there in the Twitterverse couldn't help but ogle over Oh's role as Tishy, which Vulture referred to as a "buckwild 40-something drinking Four Loko." LOL. The responses are so here for it, and quite frankly, so am I.

Others think she deserves a historical fiction role after watching her performance in "The Duel," which was a digital short spoofing a Victorian-era battle. I don't know about you, but this was definitely my personal favorite.

And finally, a large portion of viewers were simply thrilled to see Oh on that SNL stage. She seemed joyful and super confident. And honestly, wearing a shirt with your own quote on it is a total power move. Twitter was all about it.

OK for real, Sandra Oh is my idol. What a freakin' gem.

As you can see, Oh's role as SNL's host was a total hit last night. Make sure to watch the episode in its entirety, because it's definitely an unforgettable one. And if you aren't already watching Killing Eve, you should probably get on that. It's addicting beyond belief.