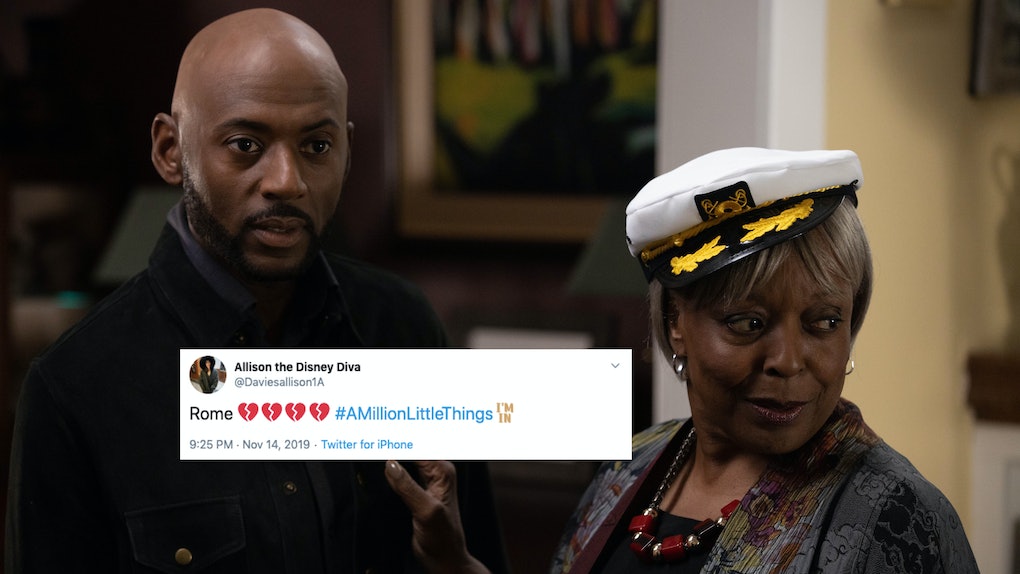 Fans were warned that the latest episode of A Million Little Things would include a funeral. But just because they had notice, it doesn't mean it was any easier to handle. It turns out, the death that had been teased was that of Rome's mom, and fans are having a hard time recovering from the heartbreak. These tweets about Rome's mom's death in A Million Little Things show just how sad fans are.

Warning: Spoilers for Season 2, Episode 8 of A Million Little Things follow. The beginning of the Nov. 14 episode of A Million Little Things showed Rome's (Romany Malco) parents Walter (Lou Beatty Jr.) and Renee (L. Scott Caldwell) preparing for their big anniversary cruise. Renee had been asking Walter to go on a cruise with her for years, and finally he gave the vacation to her as a gift for their 50th wedding anniversary. Renee was so excited to be preparing for their trip, and she even asked her daughter-in-law Regina (Christina Moses) to make a hair appointment for her. Everything was going well, until Regina received an upsetting phone call: While Renee was getting her hair done, she suddenly died from an aneurysm. Rome and his family were left to mourn, and fans were left to tweet about their feelings.

After Walter learned the news about Renee's death, he continued to pack for the cruise. It seemed like an odd reaction, until Walter explained that he wanted to keep his promise to Renee. He told her that he would go on the cruise, and he wanted to fulfill that wish even after she died.

In a strange way, Rome's mom's death brought him closer to his dad. The two have never had a strong relationship, but the last thing Renee said to Rome before she died was that she hoped Rome and Walter could get along better. So, during his mom's funeral, Rome realized he could fulfill her final wish and become closer with his dad. It was basically the tearjerker to end all tearjerkers.