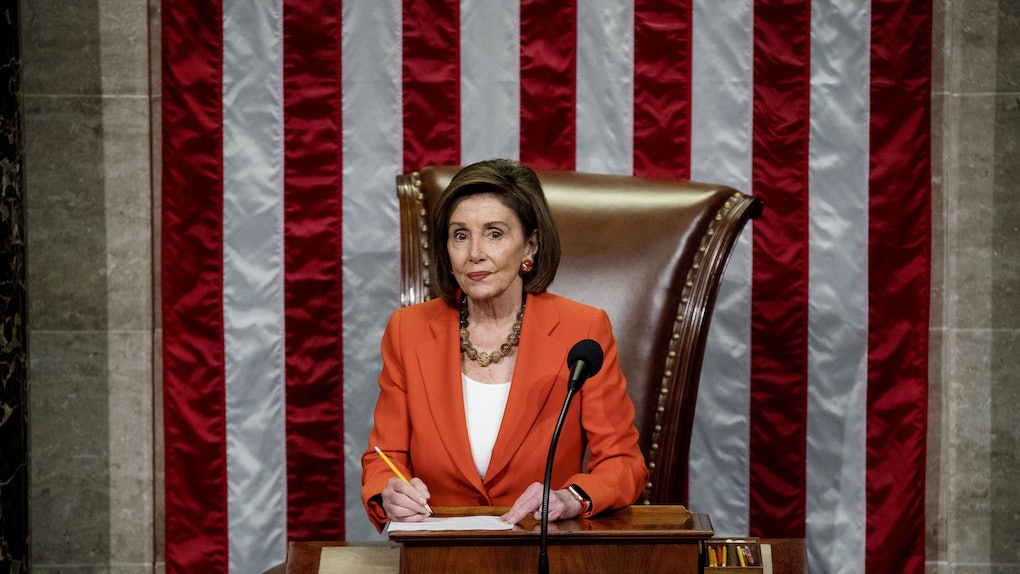 These Tweets About "President Nancy Pelosi" Make A Huge Leap

On Wednesday, Nov. 20, Ambassador to the European Union (E.U.) Gordon Sondland testified to the House Intelligence Committee as a part of the impeachment inquiry into President Donald Trump. The ambassador spilled some major tea on Trump's relationship with Ukraine, and also revealed Vice President Mike Pence was allegedly connected. Elite Daily reached out to the White House for comment on the testimony, but did not immediately hear back. This information caused an uproar on Twitter — and led a whole lot of people to start tweeting about "President" Nancy Pelosi.

On Nov. 20, Sondland testified to the House Intelligence Committee that "everyone was in the loop" in regard to Trump allegedly directing his personal attorney, Rudy Giuliani, to pressure Ukraine to open "politically motivated investigations," per USA Today. The indication that "everyone" knew appears to implicate others in the White House — including Pence. The White House has asserted there was "no quid pro quo" regarding the president and Ukraine, and Giuliani tweeted on Nov. 20 he had never met Sondland. A spokesperson for the Vice President told CNN in a statement on the same day the "Vice President never had a conversation with Gordon Sondland about investigating the Bidens, Burisma, or the conditional release of financial aid to Ukraine based upon potential investigations.” As of Nov. 20, there have been no official impeachment proceedings or accusations against Vice President Pence. Nevertheless, it didn't take too long before "President Pelosi" started trending on Twitter.

Some people are ready for the possibility. With Pence and Trump both steeped in controversy, some Twitter users immediately started stanning the idea of a Pelosi presidency.

Pelosi, in her role as speaker, announced on Sept. 24 that the House was opening an official impeachment inquiry into Trump. In an emailed statement to Elite Daily, White House Press Secretary Stephanie Grisham referred to the inquiry as Democrats' attempt to "weaponize politics." Trump claimed "PRESIDENTIAL HARASSMENT" in a Sept. 24 tweet, apparently responding to Pelosi's announcement.

Even though some Twitter users are clearly on board with a Pelosi presidency, the Speaker of the House taking up the presidency has only happened once, and under very different circumstances. So far, James K. Polk is the only president who previously served as the speaker of the House of Representatives. He served as the speaker from 1825 to 1839. In 1844, he was elected as President of the United States. Gerald Ford, who stepped into the presidency following the resignation President Richard Nixon, had previously served as House Minority Leader and taken up the vice presidency after the resignation of Spiro Agnew.