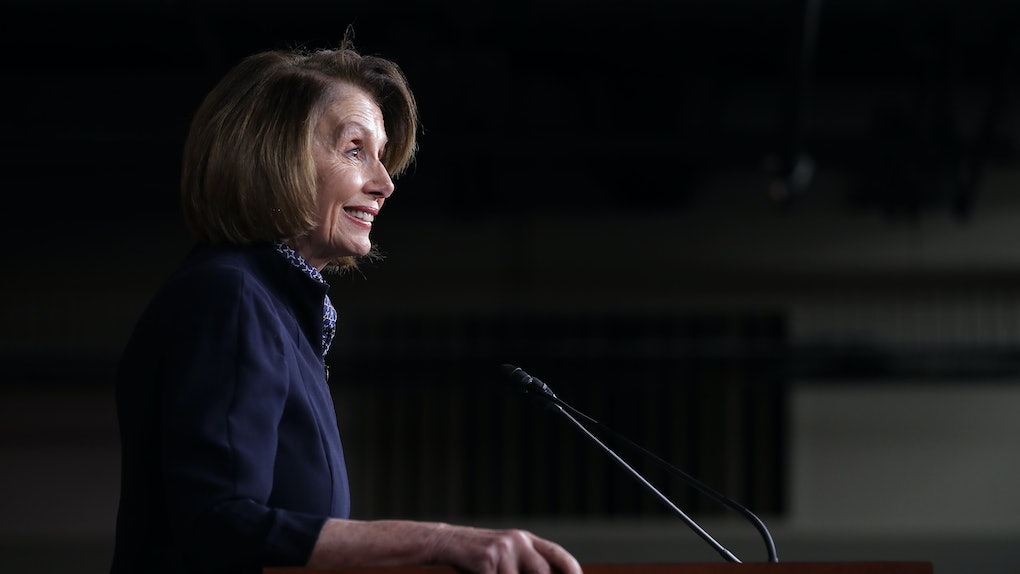 2018 may be drawing to a close, but the universe seems hellbent on throwing Washington as many plot-twists as it can before the year is officially out. In the last week alone, multiple high-profile figures associated with President Donald Trump have pleaded guilty to committing crimes related to the his 2016 presidential campaign, and with developments in various FBI investigations coming in at a breakneck pace, it's not that far-fetched to be looking down the line of succession. But can Nancy Pelosi become president? The chances of that happening are incalculably small — but not impossible.

Technically, there are two paths for Pelosi to swoop a Madame Prez title. As incoming Speaker of the House, she'll move into 2019 as second in line to the presidency, behind Vice President Mike Pence. But while there's long been speculation over how long Trump might last in the Oval Office — whether he'd resign or be removed by impeachment — it's unlikely Pence, should he succeed Trump, would ever be removed from office. There's been chatter that Pence's exposure to the presidency and the FBI investigation into Russian meddling in the U.S. election might have put him in a legal tough spot, but there's no indication, at least as of Dec. 14, that he's at serious risk.

The far easier and more predictable scenario (although take this with a heaping spoonful of salt given the roller coaster of the last two years), she'd simply be elected as president. As her Democratic colleagues are already lining up, she could easily throw her name into the ring for the 2020 election — but as of now, polls show little indication that she's planning to run.

That said, Pelosi, though something of a controversial figure, has been doing serious work lately to assert her position in Washington. The drama over the debate for her to assume speakership during the last month brought a lot of Pelosi's biggest fans — and foes — out of the woodwork. But ultimately she succeeded, in part bolstered by her career: Love it or hate it, Pelosi, with one round of speaker experience under her belt, has a track record as an expert negotiator and getting things accomplished in even the most thorny of political climates.

If Pelosi was hoping to buttress her image and authority after in embattled intra-party spat over speakership, she did it in spades this week. During a contentious Oval Office meeting with Trump and Senate Minority Leader Chuck Schumer on Dec. 11, Pelosi came out ready to brawl. When Trump questioned her authority as incoming Speaker, she clapped back, "Please don't characterize the strength that I bring to this meeting as the leader of the House Democrats, who just won a big victory." Oof.

If that wasn't enough, she went for one last gut-shot after the meeting ended, telling her colleagues of Trump's power grabbing over the border wall funding: "It's a manhood thing for him."

Per NBC News, Pelosi even says she told Trump directly that she "prayed for him." Insert collective gasping here.

Whether Pelosi will ever attain the beloved iconic status afforded Supreme Court Justice Ruth Bader Ginsburg ("the Notorious RBG"), it's a distant maybe. But there's no question she's not holding back on asserting her position as she heads towards a second turn in the speaker role.