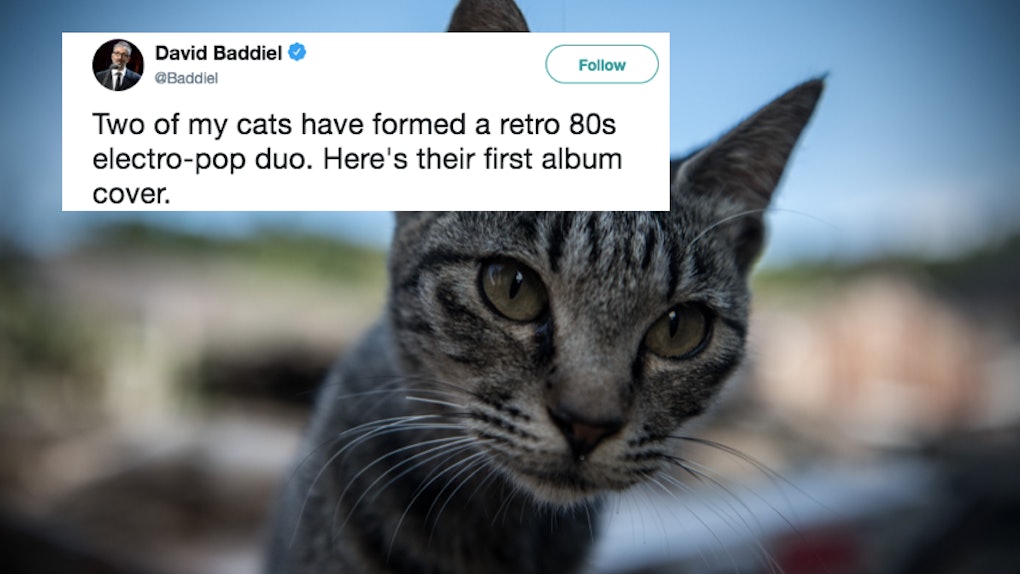 Twitter can be the source of a lot of stressful content and drama, but every now and then the website gives us some wholesome content and some real gems. After a day of seeing threads about our crumbling democracy, Trump's border wall demands, endless hot takes on millennial burnout, and other generally depressing topics, I was elated to find some much-needed cute animal content. These tweets about pets that look like album covers are perfect if you need a break from the real world and want to enjoy some creativity and cute animals.

On Saturday, Jan. 26, comedian David Baddiel tweeted a photo of his cats with the caption, "Two of my cats have formed a retro 80s electro-pop duo. Here's their first album cover." The photo features one of Baddiel's cats sitting on a staircase staring off camera as if to contemplate something incredibly important. The other cat is lying down comfortably in the background on top of the steps, much more nonchalant than the tan one in the foreground. These sweet felines definitely look like they're about to perform at some super cool, dark venue where the audience is too cool for me. Twitter user @ElNuevoOtroMio2 described the scene, writing "The guy at the front is the flamboyant one who gets all the attention. The one at the back writes all the songs though. Few people even know his name."

Shortly after Baddiel's post, many Twitter users started to respond with their own pet photos that look like album covers of various genres. Streaming services everywhere better get ready for a new wave of music!

A wistful cover for an album called "The Other Side:"

The stripped down, acoustic album:

The dark and mysterious album:

The classic "looking into the distance" album:

These pets may be busy creating the hottest albums of 2019, but they're not the internet's only cute creatures. Recently, Twitter user Jordan Ireland surprised the world on Dec. 28, 2018, with a video of her dog Maggie and her cat Pumpkin apparently hugging and petting one another. She wrote, "Did my dog just pet my cat?? And did my cat just hug my dog??" Twitter fell in love instantly and people like @carlyjosanne shared photos of their dogs and cats doing the same or demonstrating love toward each other in other ways. It was a seriously cute display of cats and dogs totally breaking down stereotypes, and just showing all the love.

Animals have the power to bring joy into everyone's lives. Whether you're browsing Twitter for cute animal content or taking album photos of your dogs, you can't really go wrong when browsing the internet for all sorts of sweet pets. And now, you can look forward to the fuzziest and cuddliest albums of 2019.