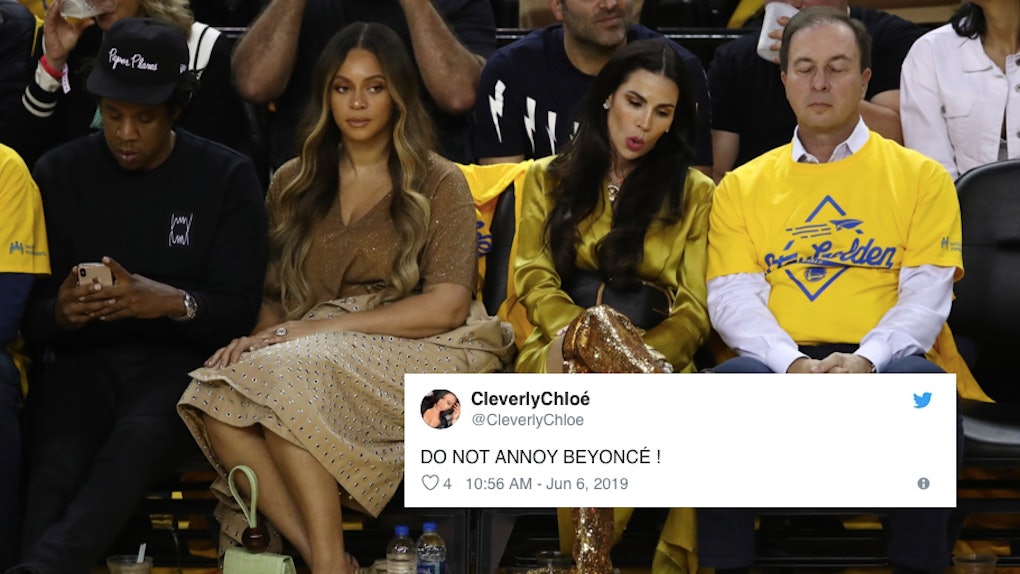 These Tweets About Nicole Curran Leaning Over Beyonce Call Her Out

If you don't watch basketball, then you may have missed the fact that Beyoncé and JAY-Z rolled up to Game 3 of the NBA Finals in Oakland, California, on June 5 to watch the Golden State Warriors take on the Toronto Raptors. The Warriors lost, but nobody's really talking about the big L today. What they're all talking about is the video of Bey throwing side-eye at a woman who dared to invade her personal space during the game in order get chatty with her man. Turns out, the woman in question was none other than the wife of Warriors owner Joe Lacob. And these tweets about Nicole Curran leaning over Beyoncé prove that the queen has some seriously loyal fans.

Where can I get me some of those?

Anyhoo, here's what went down. See, Jay and Bey were sitting court-side during the game, because of course they were. To Beyoncé's right was Jay, and to the left (to the left) was Curran, followed by Lacob. At one point during the action, Curran leaned across Beyoncé to talk to JAY-Z. And Bey reacted as only a queen like Bey could: She scowled, threw a little side-eye Curran's way, and then silently checked her with her shoulder until she gave up and got back in formation.

Oh yes, that really happened. And ESPN caught it all on tape, so here you go:

Here's a closer look at that amazing shoulder check, because zayumm, Bey!

I mean, how perfect was that execution? I give that performance a 10 out of 10 because Sasha Fierce managed to make herself heard without uttering a damn word and none of us are worthy.

The whole thing was just super impressive. And no surprise, the Beyhive is currently flipping out over the whole side-eye/shoulder check incident over on Twitter, where they've wasted no time sharing their feelings about Bey dissing Curran for invading her personal space.

"Becky was blatantly disrespectful, Beyonce's patience was admirable, and Jay was typically clueless," wrote one.

"That lady is lucky @Beyonce was being polite! She deserved to be told off!" added another.

And from a third Twitter user: "Beyoncé is MOOD! I woulda done the same!"

Hmm. Would I have done the same? Maybe. I mean, in my mind I would have been shoulder-checking this chick all day, but would I have actually had the cojones to pull the move off IRL? I'm not so sure.

Whatevs, you can check out these tweets below, plus a whole bunch more because Twitter is blowin' up:

Meanwhile, once Bey's fans figured out who Curran was, they flooded the poor woman's Instagram feed with bee emojis, forcing her to turn off the comments and eventually set her account to private.

But before she did, Curran responded with her own (now-deleted) Instagram post that featured a screengrab from the game, and in it, it looked like she was... fixing Beyoncé's hair?

"We should all help and support each other," she wrote in the caption.

She got to breathe the same air as Beyoncé, y'all!

More like this
These Tweets About Jimmy Fallon's TikTok Dance Follow-Up Segment All Say It's Too Little, Too Late
By Brandy Robidoux
These Tweets About Regé-Jean Page Leaving 'Bridgerton' Are Royal Bummers
By Cianna Garrison
Prince Philip, The Duke of Edinburgh, Has Died At The Age Of 99
By Noelle Devoe
Stay up to date