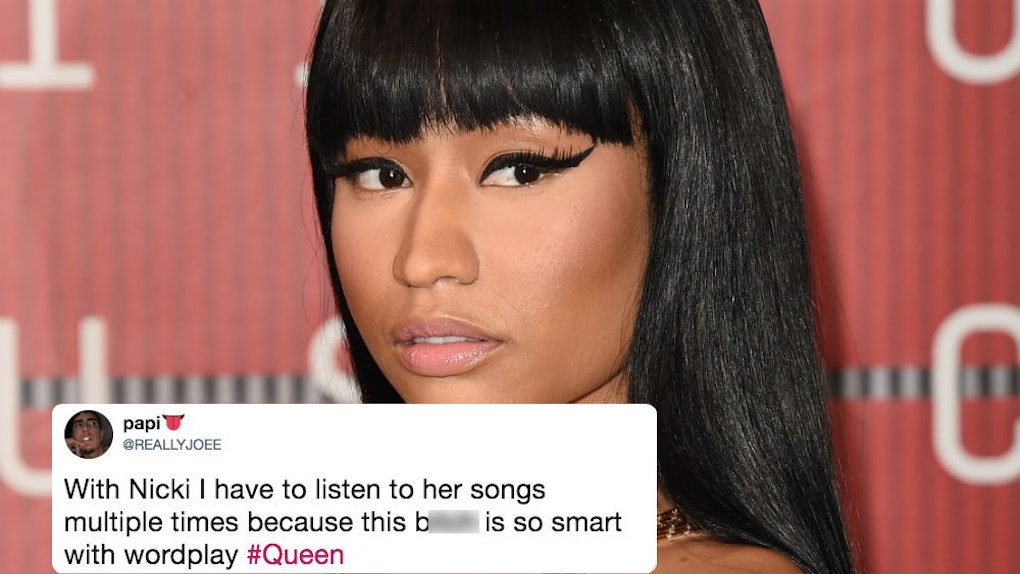 For those of you who wish they didn't have to wait until Aug. 17 to hear Nicki Minaj's newest album, Queen, you're in luck! Though it was initially supposed to drop on June 15, the release was unfortunately pushed back to August for reasons unbeknownst to fans. But the world got one hell of a surprise today when it was revealed that Queen would be dropped today at noon, and now, it's finally here. I'm like a kid on Christmas morning right now, because Queen has multiple collaborations with some major artists (ahem, hello Ariana Grande and The Weeknd) and each track is basically pure fire. But don't just take my word for it: many fans couldn't agree more, and these tweets about Nicki Minaj's Queen will make you stop what you're doing and listen to the entire album on repeat.

Minaj took to Instagram in the early hours of Friday, August 10 to show her fans the tracklist, and you can see just by looking at the titles and the artists that Minaj collaborated with that Queen is one legendary album.

Totalling 19 tracks and a whopping 7 collaborations, it's clear that Queen is already on it's way to music royalty. Check out all of the song titles below in all of their glory:

And, while being gifted with all of the track titles, it pales in comparison to actually listening to all of the songs. Have you ever listened to a song and literally have had tears in your eyes because it's just so good? Get ready for that feeling... multiplied 19 times over. The songs on Queen are BEYOND, you guys, and many fans took to Twitter to explain just how much they stan this album.

One song fans are losing it over, in particular, is "Barbie Dreams," because Minaj drags her ex, rapper Meek Mill, for filth in the lyrics. The track is basically one long diss to a ton of different people in Minaj's life, but she gets particularly brutal when she addresses Meek, rapping, "Meek still be in my DMs I be having to duck him." Fans were shook, to put it lightly.

Of course, stans of Minaj's close relationship with Ariana Grande and their frequent collaborations have already heard their collab on Queen, "Bed," but that didn't stop fans from going off about it on Twitter anyway.

But most people can't get over Minaj's collab with her rumored flame Eminem. Whether they're dating or not, he's a rapping legend, so obviously their track together, "Majesty," is straight fire.

All hail Queen Nicki, y'all.