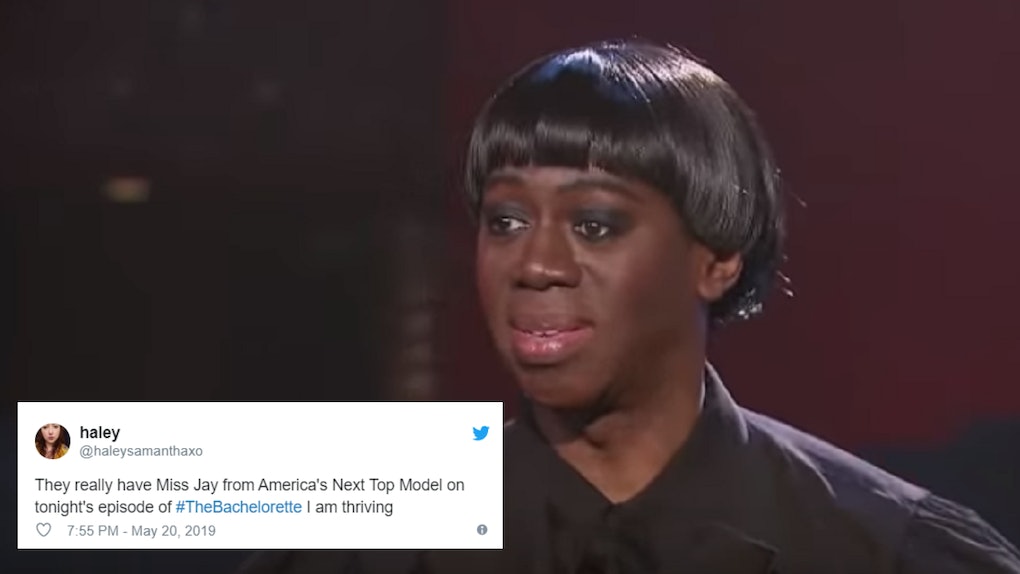 The Bachelorette is legendary within the world of reality TV, but one of its most beloved contemporaries has to be America's Next Top Model. Whether you loved Tyra Banks' lessons on how to smize or the contestants clashing with each other in the house, the modeling competition had every crucial element of an addictive reality show. During Episode 2 of Hannah Brown's season, viewers got to catch up with one of ANTM's famous judges J. Alexander, and tweets about Miss J on The Bachelorette prove that Bachelor Nation is rooting for this cameo.

Originally running from 2003 to 2015 before a rebooted series began in 2016, America's Next Top Model featured a rotating panel of judges working alongside host Banks to find the next modeling star. After popping up occasionally to deliver runway lessons, model J. Alexander, or Miss J, became a regular judge in Cycle 5 and frequently appeared on the show until a revamped Cycle 19. Often partnered with creative director Jay Manuel, Miss J delivered sassy looks and blunt advice throughout the years, all while looking flawless. When you have a free moment, treat yourself to a YouTube reel of his best ANTM moments and daydream about what would happen if Chris Harrison ever crossed paths with him.

The classic years of America's Next Top Model are television gold, so when Miss J appeared on The Bachelorette to help Hannah judge a Mr. Right pageant on a group date, it truly felt the best of both worlds. While he didn't critique the men on their walks, he was there to serve some fierce one-liners that would make Tyra Banks proud.

On Twitter, Bachelor Nation exploded with glee about this Bachelorette and ANTM crossover.

The setup of contestants showing off their best skills was definitely reminiscent of Miss J at an America's Next Top Model runway show. All that was missing was Mr. Jay and Nigel Barker. Maybe they can crash hometown dates later this season?

This time, Miss J and Hannah had drag queens Alyssa Edwards and Alaska rounding out their judging roster, which fueled many visions of a different kind of ANTM episode. To paraphrase Banks' finest moment, I'm rooting for them and all of Bachelor Nation is rooting for them to make their appearances a thing in future seasons.

Instead of breaking down contestants' walking style, Miss J also summed up Bachelor Nation's feels when Luke P. used his talent portion of the pageant to profess love for Hannah. ICYMI, this is only Episode 2, so this confession felt a little premature. J's trademark expression of widened eyes perfectly captured how incredulous everyone but Hannah seemed to feel toward his proclamation. Does he have Banks on speed dial to get her opinion?

Hannah might have had another guy in mind for her group date rose, but Miss J definitely would've earned mine. Season 15 of The Bachelorette continues at 8 p.m. ET on Monday, May 27, on ABC.