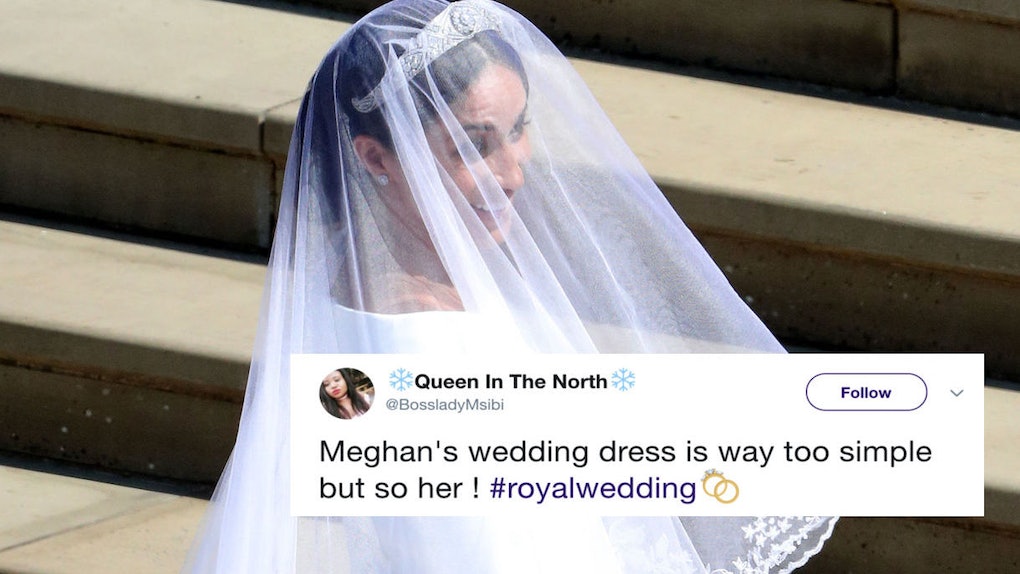 Hear ye, hear ye! The time for the royal wedding has officially passed, and Prince Harry and Meghan Markle are now officially husband and wife. At this moment in time, it's total sensory overload with every tiny detail of the royal nuptials now within reach. Surprising to absolutely no one, what seems to be taking over social media right now are tweets about Meghan Markle's wedding dress. Seriously, the now-princess looks absolutely beautiful, but people are a little torn over the choice. Clearly, there's no doubt that the world is in love with Markle, but maybe not as much with her dress.

Leading up to the big day today, I was already excited to see the pair get married, but I can't lie, the top reveal I was looking forward to seeing was the long-awaited dress. For months now, rumor after rumor has flown around regarding the details of Markle's dress, who the designer is, whether or not she'll go the more traditional route over a modern one, etc. The fashion coterie wasted no time gossiping over Markle's aesthetic choices, and designers from Stella McCartney to Christopher Bailey were linked to the royal wedding.

And now, Markle's royal wedding style has finally been revealed.

On her big day, Meghan opted for a very classic, timeless silhouette without much detailing on the dress itself. The boat-neck style dress with three-quarter sleeves was designed by Clare Waight Keller for Givenchy, a pick no one really saw coming, actually. Kensington Palace revealed some of the tiny details about the dress' design that you may not have caught:

True to the heritage of the house, the pure lines of the dress are achieved using six meticulously placed seams. The focus of the dress is the graphic open bateau neckline that gracefully frames the shoulders and emphasises the slender sculpted waist. The lines of the dress extend towards the back where the train flows in soft round folds cushioned by an underskirt in triple silk organza. The slim three-quarter sleeves add a note of refined modernity.

In reality though, what totally stole the show with Markle's look was her incredibly long veil, with floral lace detailing on the hem, and her tiara, Queen Mary's diamond bandeau tiara. According to Kensington Palace, the tiara "was made in 1932, with the centre brooch dating from 1893," and it was lent to Markle by Queen Elizabeth herself.

If you're obsessed with weddings, or clothing in particular, then you know that there's so much that goes into a wedding dress. Over the past couple months, Markle has had to nail out all the details, from the fit of her dress to how dramatic she wanted her veil, and most importantly, to how long the train would trail down the aisle. Then, of course, there's the shade of white to choose, the designer, the style of the shoes, the accessories, and the tiara that would sit on top of her head, if she decided to have one it all.

Needless to say, picking a gown for anyone, much less for a royal wedding, is anxiety-inducing, at best. Double that with billions of people all around the world critiquing your every choice and your every step, and the pressure is on. Regardless, though, Markle has absolutely stunned us all, looking absolutely drop-dead gorgeous on her big day. With this look, Markle has 100 percent earned her title as the GBOAT — The Greatest Bride Of All Time, that is!

Like I mentioned before, Twitter is aflame with reactions to The Dress. The people have spoken, and overall, while some of the critics delivered glowing reviews, others were apparently expecting a little more.

Well, regardless of how Twitter feels, Meghan Markle's wedding look is timeless, perfectly her, and exceptionally beautiful. From the sleek silhouette to the beautiful veil to her stunning beauty look crafted by Daniel Martin, Markle truly stunned us all, and I still haven't picked up my jaw off the floor.

More like this
Where To Buy Charli & Dixie D'Amelio's Hollister Fleeces, Each Designed By Them
By Margaret Blatz
Zendaya's 2021 Oscars Dress Proves Yellow Is The Color Of The Year
By Theresa Massony
These Tweets About Brad Pitt's "Little Bun" At The 2021 Oscars Are Unhinged
By Theresa Massony
Stay up to date