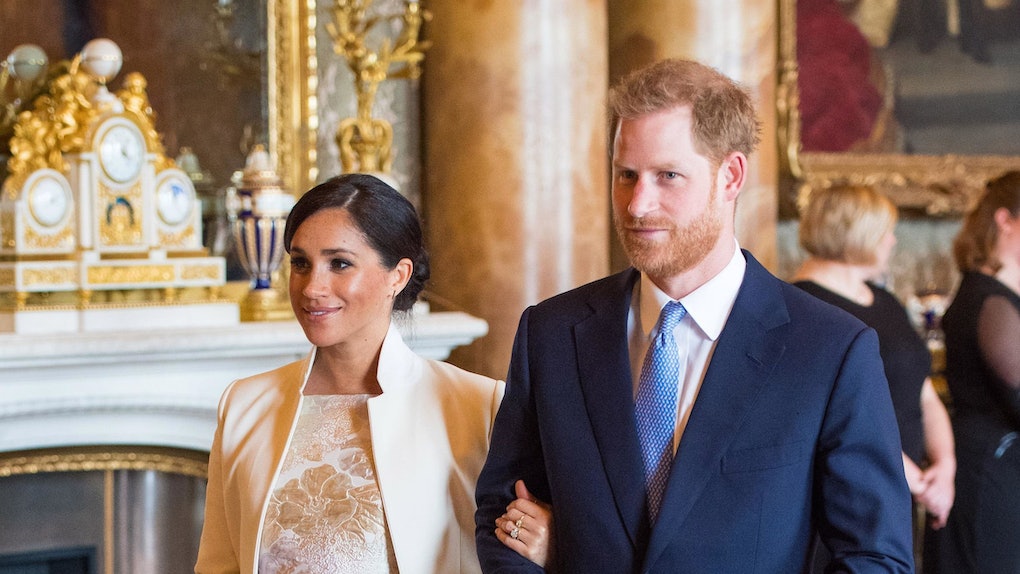 Well, folks, the moment everyone had been waiting for since last fall finally happened — on Monday, May 6, Duchess of Sussex Meghan Markle gave birth to a healthy baby boy. After making the announcement of Markle's pregnancy last October, Markle and Prince Harry kept details related to the pregnancy, like the sex of the royal baby and any potential baby names, relatively private. And while the proud parents have now announced their new baby is a boy, the world still doesn't know his name, which has led many people and experts to speculate. One expert speculated that the baby will have an "unusual" name bringing together both Markle and Prince Harry's backgrounds, and let's just say social media ran with it. These tweets about Meghan Markle and Prince Harry's baby's "unusual" name are truly the wildest of all guessing games.

The "unusual" name theory comes from a quote given by royal expert Victoria Arbiter to CBS. Arbiter said, "I ... think we are going to see a name that works on both sides of the pond," implying that the royal baby's name will have both American and English roots. Arbiter's quote was then mentioned in a Daily Express article and tweet that read, "Meghan Markle and Prince Harry to choose UNUSUAL name for baby that UNIFIES the US and UK."

As soon as the Daily Express tweeted the quote, Twitter users started engaging in a massive guessing game to try and predict what "unusual" name might "unify" the U.S. and UK. It's clearly all speculation as the couple haven't announced the name, but it's.... pretty good. Here are some of the hilarious guesses:

While Twitter is busy predicting some hilarious U.S. and UK unifiers like the British and American TV show The Office, the literal ocean between the two countries, and famous British people living in the U.S. like James Corden, Arbiter had some of her own predictions too. Though we now know that the newest royal addition is a boy, before baby Sussex actually arrived, the speculation was coming hard and fast. If the royal baby were a girl, Arbiter predicted names like Eleanor, after Eleanor Roosevelt, an American political figure, and Eleanor of Aquitaine, a respected twelfth century queen; or Alice, after Alice Walker who wrote The Color Purple and the various Alices throughout the history of the British royal family.

For boys, Arbiter predicted Alexander. She said that since Alexandra is the queen's middle name, the male version would be Alexander. Plus, Alexander Hamilton was one of the founding fathers of the United States, so that would fulfill the alleged desire for a U.S./UK hybrid name.

But don't start ordering monogrammed souvenir coffee mugs yet. After the birth of the baby on May 6, Prince Harry told the press himself that he and Markle hadn't quite settled on a baby name yet, but he promised they would know soon. In an Instagram video shared to the official account for the Duke and Duchess of Sussex, Prince Harry said,

I'm very excited to announce that Meghan and myself had a baby boy early this morning, a very healthy boy. Mother and baby are doing incredibly well ... still thinking about names ... the baby's a little bit overdue so we've had a little bit of time to think about it.

The official announcement on the Duke and Duchess of Sussex's Instagram account said that more details will be shared in the days to come. Don't mind me, I'm jut going to obsessively sit here and wait for the big name reveal.

More like this
Meghan Markle & Prince Harry's Beef With The British Tabloids, Explained
By Brandy Robidoux
Meghan & Harry's Statement About Prince Philip's Death Is Simple, But Moving
By Sydney N. Sweeney
These Tweets & Memes About April Fools' Day 2021 Hilariously Shut Down The Holiday
By Lara Walsh
Stay up to date