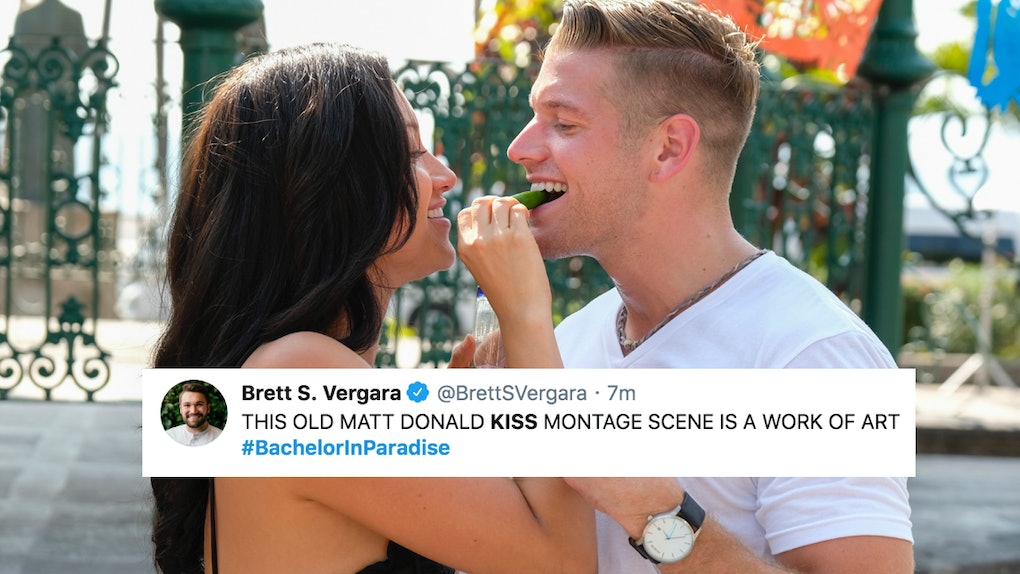 As soon as Matt Donald arrived in Paradise, he seemed to only have eyes for Sydney Lotuaco. However, though they had instant chemistry on their date, there was one thing standing in Matt's way: He was nervous about taking the leap and kissing his new love interest. In fact, their not-kissing became such a big deal that, once they finally did kiss, the Bachelor in Paradise producers properly celebrated with a montage to end all montages. These tweets about Matt Donald's kiss montage on Bachelor in Paradise show just how over the top it was.

Matt and Sydney hit it off during their double date with Luke S. and Kristina, especially when Matt told her he grew up with family members who are deaf and showed her how to say some words and phrases in sign language. When he taught Sydney the sign for the phrase "kiss me," it seemed like the perfect opportunity for the two to share their first smooch. However, to Sydney's surprise and chagrin, Matt didn't make a move.

Later on during the cocktail party, Sydney told cameras she thought body language must not come easy to Matt. Meanwhile, Matt revealed that he was holding back from kissing Sydney not because he didn't want to kiss her, but because he is shy, and kissing is a big deal to him. After making it clear he wanted his first kiss in Paradise to be special, he finally went for it with Sydney... and the Bachelor in Paradise producers pulled out all the stops to make sure fans at home knew just how special the kiss really was.

Here's how it all went down: During the cocktail party before the rose ceremony, Sydney told Matt he had full permission to kiss her. Matt — after coaching from Demi, Dylan, and other Paradise castmates — finally took the bait and kissed her, while all the rest of the beachgoers watched and cheered. Fans at home were probably cheering too, since the shots of Matt and Sydney kissing were interspersed with videos of baby animals walking for the first time, rockets taking off, and crabs waving in celebration. The editing job was... a lot, to say the least.

Even Demi Burnett, who's a Bachelor in Paradise contestant herself, took to Twitter to voice her excitement over the Matt McDonald kiss montage:

Matt explained that he felt weird knowing that his mom and the rest of his family would be watching him make out with somebody on national television, and fans on Twitter made sure to include that tidbit in their kiss commentary.

After his kiss with Sydney, Matt seemed to become more comfortable with the idea of his family seeing him kiss people. The day after the make-out session with Sydney, Bri Barnes joined everyone in Paradise, and ended up taking Matt on her one-on-one date. The two of them spent an afternoon in the ocean together, and Matt showed no hesitation about kissing Bri.

Now that Matt has had his first (and second) Bachelor in Paradise kisses, there might be no stopping him. Hopefully Matt has lots of enjoyable smooches in his future.