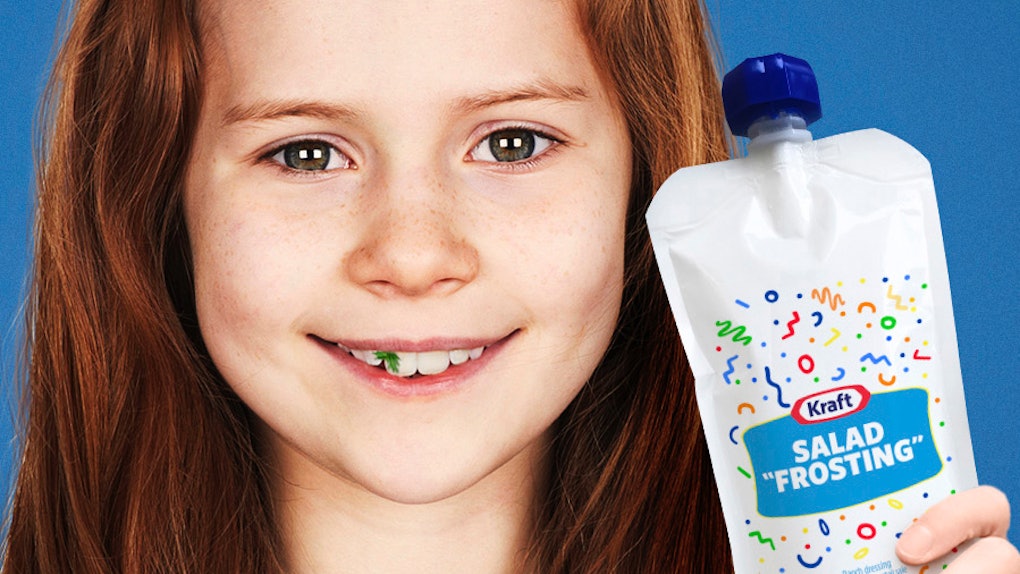 It's 2019, and I'm struggling to process the fact that "Salad Frosting" is now a real thing. Contrary to its name, the new Kraft product is actually just good old fashioned ranch masquerading as icing for veggies — but people are losing their chill over the fact that the company decided that there's nothing like getting your ranch fix from a frosting squeeze tube. Is this the best marketing ploy ever or something that you wish you could unsee? I feel like I definitely fall in the latter category, and these tweets about Kraft's new "Salad Frosting" show that the jury is still out on this one.

According to a press release shared on Monday, June 10, the company came up with the idea of Salad Frosting to make it a little easier for parents to convince their kids to eat their vegetables.

"According to a recent study, Ranch dressing is the most popular dressing in the United States, and kids will eat anything with frosting, right?" the press release reads. "It’s a match made for dinnertime bliss. Now, convincing children to eat salad, broccoli and carrots may be a whole lot easier. Just add Kraft Salad 'Frosting.'"

Now, I'm not a parent, but I'm definitely seeing a few potential issues with this plan. As much as you can disguise the ranch dressing in a fancy bottle, the fact of the matter is that it's still going to taste like, well, plain old ranch. Even if a kid is excited about the prospect of trying this mysterious new sauce called Salad Frosting, he or she is going to figure out that it tastes nothing like the frosting on a cake or cupcake pretty quickly. IMHO, that's really not a bad thing, because the thought of eating my broccoli or carrots covered in layers of thick buttercream is the stuff of nightmares, but I'm not sure a kid would agree.

Still, Kraft is pretty convinced that it's going to work. The company's head of marketing Sergio Eleuterio said in the press release:

Innocent lies parents tell their kids help alleviate the pressures of everyday parenting, and if it gets kids to eat their greens, so be it. Simple innocent lies are not only part of parenthood, but a true tactic used by parents everywhere. Kraft Salad 'Frosting' is one lie you won’t feel bad telling your kids.

Unsurprisingly, not everyone agrees with that statement, and some Twitter users are pretty horrified that Salad Frosting exists in the first place.

Still, there are a few customers applauding Kraft for its creativity. After all, Salad Frosting is one potential product that literally has never crossed my mind.

Interestingly enough, the idea of "Salad Frosting" appears to have come from Twitter user XplodingUnicorn's 6-year-old daughter, who first dubbed the infamous phrase back in February. However, a Kraft rep reportedly told Huffington Post that their newest product has "no relation to the tweet, but that’s very funny."

So, will this be a short-lived marketing gimmick or will so-called Salad Frosting be sticking around? Only time will tell, but it sounds like you can try it in the meantime by sharing the very best parenting lie that you've told on Twitter using the hashtags #LieLikeAParent and #contest. Based on the number of likes and the originality of your post, Kraft will then choose 1,500 recipients to receive a free sample of Salad Frosting delivered right to your door. Happy ranching!