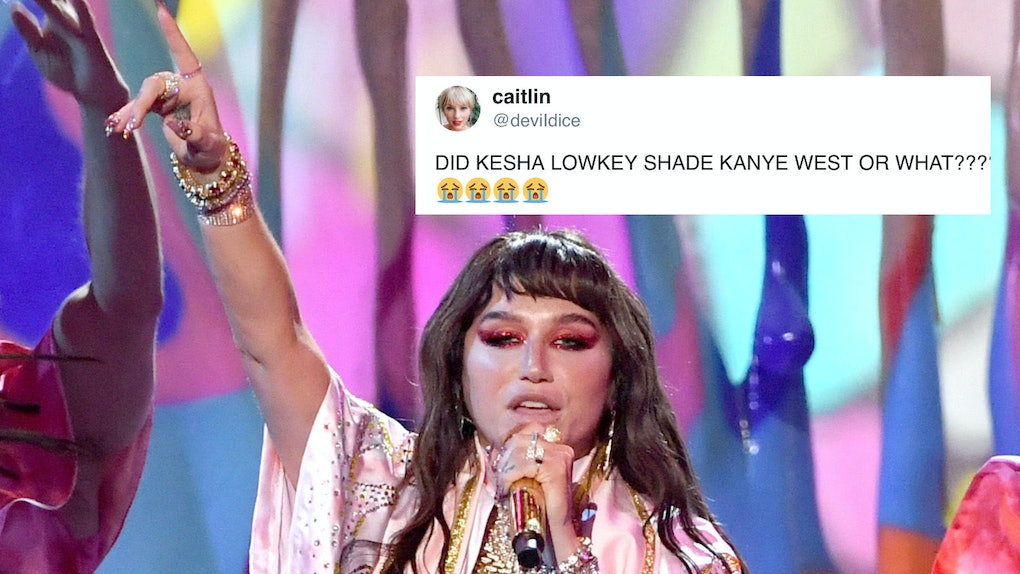 Kesha certainly used her 2019 American Music Awards performance to send a message... and a lot of viewers thought that message included a bit of shade at a particular someone. Prior to launching into her single "Raising Hell" on the Sunday, Nov. 24 award show, Kesha made a very emphatic comment, and these tweets about Kesha's 2019 AMAs performance all point to a potential bit of shade thrown at Kanye West.

Before launching into her performance partway through Sunday night's American Music Awards, Kesha made a brief announcement to the audience. Backed by a setting of stained glass and gospel singers, Kesha declared: "This is our Sunday service." While the comment seemed to just be a fun introduction to her gospel-inspired new single "Raising Hell," which has a lot of fun with evangelism in its music video, a lot of viewers were quick to pick up on a potentially shady aspect to the singer's pointed emphasis on the word "our."

As pretty much everyone who has even been tangentially paying attention to pop culture in 2019 knows, Kanye West has made a total pivot to Christian music recently. Throughout the year, West has hosted numerous pop-up music festivals, which he has called his Sunday Services. That is why viewers were quick to wonder if Kesha's comment about staging her own Sunday service on the AMAs stage was a small dig at West's own project. Twitter immediately blew up with fans reacting to the perceived shade.

It is not totally clear whether the comment was intentionally meant to bring West's Sunday Services to mind or if it was an unrelated remark simply meant to bring the church vibe to her performance, but either way, it definitely got everyone talking. Kesha and West do not have a public history of feuding or of friendship either.

West himself was not present at the American Music Awards this year. While the show was airing, West tweeted that he was working on his new opera Nebuchadnezzar, and was meeting up with Chance the Rapper in his studio.

While Kesha's Sunday service comment definitely got her performance started with a bang, it was definitely not the only highlight. Kesha delivered a rousing rendition of "Raising Hell" with Big Freedia, and then surprised fans everywhere by transitioning into her 2009 breakout hit "TiK ToK." It was definitely a ton of fun to see Kesha perform her first big hit a full decade after it was first released.

Now, music fans just have to wait to see if either Kesha or West comment on that Sunday service remark and hopefully clarify if it was intentional shade or just an unrelated moment.