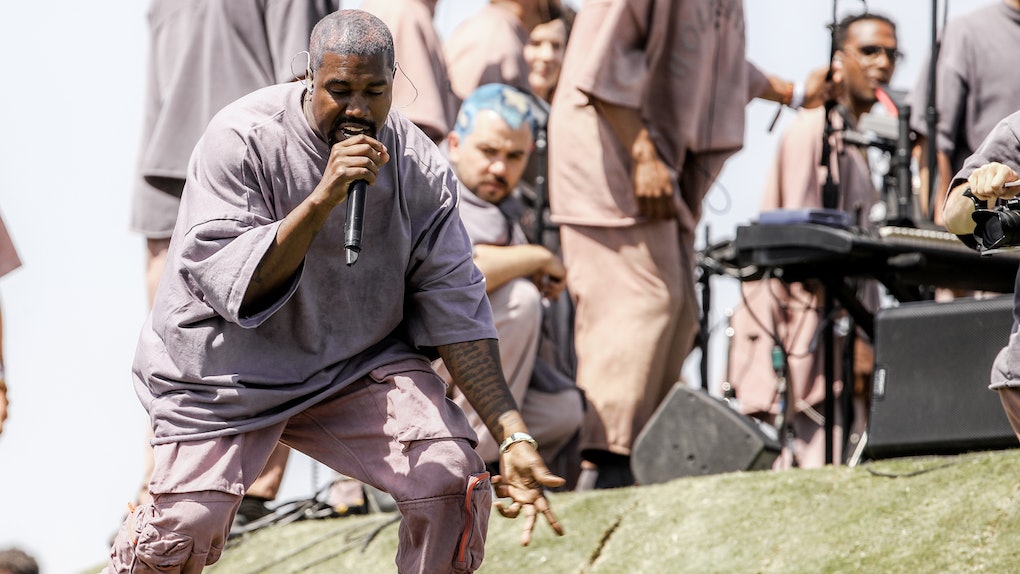 Sunday Service: The Album is finally here, fam. Just kidding, but seriously, after missing (and subsequently delaying) numerous release dates, it seemed like Jesus Is King would never see the light of day. Remember Yandhi, aka the albumKim Kardashian promised fans in 2018? Y'know, the album which is rumored to have actually taken form as the recently released Jesus Is King? Yeah, that one. Well, it seems West fans weren't too bothered by the wait. These, tweets about Kanye West's Jesus Is King are filled with praise.

It's really interesting to see how loyal many of West's fans have been even with all of the false-starts. On Sept. 27, 2018, West tweeted his plans to release an album. He wrote, "we’re releasing Yandhi Saturday night. We know it will come in number 2 to my brother Lil Wayne and that’s lovely. The universe needs Ye and Wayne music at the same time." Oh, what a dream... Honestly, it would've been nice to have tunes from Lil' Tunechi and Yeezy at the same time, but West postponed the project. Then, a few days later Kardashian gave an update fan were waiting for.

On Oct. 1, 2018, Kardashian claimed Yandhi would arrive in time for Black Friday. "Nov 23 Black Friday YANDHI TRUST ME it is worth the wait," she wrote. But again, another missed date. Fast-forward to August 2019, and Kardashian teased another album from her husband: Jesus Is King.

When it didn't drop at midnight, West tweeted, "To my fans. Thank you for being loyal & patient. We are specifically fixing mixes on 'Everything We Need,' 'Follow God,' & 'Water.' We not going to sleep until this album is out!"

True to his word, the album dropped hours later on Oct. 25, and judging by the tweets below, Yeezy stans aren't bothered one bit that it came out late.

HERE'S HOW TWITTER REACTED TO 'JESUS IS KING' FINALLY BEING RELEASED:

As you can see, fans are super hype right now. Although the album drops came a month later than its original release date, fans are celebrating anyway because according to them, the album is absolute fire and so worth the wait. If you haven't listened to Jesus Is King yet, you can do so below. Prepare to be blessed.

If you've already finished the album and are craving more West content, know that the rapper also released an accompanying film for his album called Jesus Is King: A Kanye West Film, which is inspired by West's Sunday Service concert series. The film hit IMAX theaters on Oct. 24, just hours ahead of the album's release. With a film and an album out now, I'm sure fans can forgive West for all the delays because as their tweets show, the wait was totally worth it.

More like this
These Tweets About Amy Adams' 'Woman In The Window' Are Brutal
By Abby Monteil
These Tweets About Beyoncé On Netflix's 'Selena: The Series' Are Too Much
By Dylan Kickham
BTS' "Butter" Teaser Photos Show Off Their New Hair Colors In HD
By Michele Mendez
Stay up to date