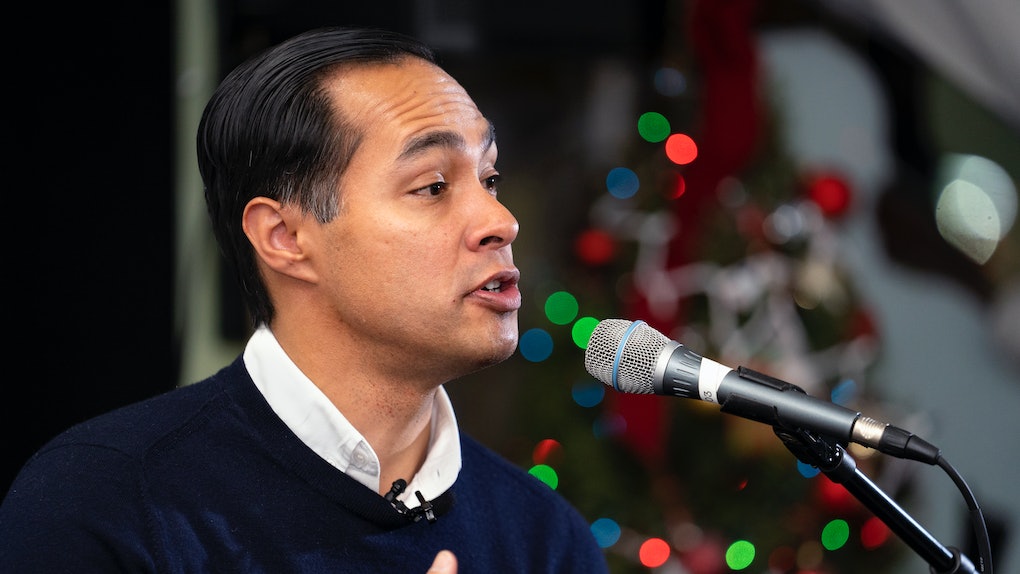 What started as the most diverse Democratic primary field in American history has been changing rapidly. On Thursday, Jan. 2, former Housing and Urban Development (HUD) Secretary Julián Castro ended his presidential bid by saying, “I’ve determined that it simply isn’t our time." Castro was the only Latinx candidate in the 2020 field, and as a candidate focused on issues like police violence, immigration, and disability justice. Many Twitter users expressed their disappointment following Castro's announcement, and noted that the Democratic primary just became even more white.

Castro announced his departure from the 2020 presidential race in a video he posted to Twitter on Thursday morning. "I'm so proud of the campaign we've run together," Castro said. "We've shaped the conversation on so many important issues in this races, stood up for the most vulnerable people and given a voice to those who are often forgotten."

"But with only a month until the Iowa Caucuses, and given the circumstances of this campaign season, I've determined that it simply isn't our time, so today it's with a heavy heart and with profound gratitude that I will suspend my campaign for president," Castro added.

In recent months, the diversity of the Democratic primary has been dwindling. On Dec. 3, California's Sen. Kamala Harris, the only black woman running for the nomination, also announced she was suspending her candidacy, leaving only one person of color — former tech executive Andrew Yang — to participate in the Democratic debate on Dec. 19. Castro was still in the race at the time, but was unable to qualify for the debate due to his insufficient standing in the polls. This is in contrast to the first Democratic debates in June 2019, where a quarter of the 20 participants were people of color. The number of women in the Democratic primary has gone down, too, with the departures of Harris and New York Sen. Kirsten Gillibrand.

In his video announcement, Castro discussed the work his campaign had done, and paid tribute to victims of police-involved shootings like Michael Brown, Tamir Rice, Aiyana Jones, and so many more. Shortly after Castro announced that he was ending his presidential bid, Twitter users shared their disappointment. They highlighted Castro's progressive policies and the unique voice he brought to the race. Castro regularly named victims of police-involved violence, addressed disability justice, and avoided using gendered language when discussing abortion, they pointed out, making him an inclusive candidate on a debate stage that otherwise leaned old and white. Twitter users also expressed their disbelief that candidates like Castro and Harris had dropped out of the race, while white male billionaires like Michael Bloomberg and Tom Steyer remained.

On Dec. 3 — the same day that Harris ended her presidential bid — Castro slammed the ways in which women and people of color are overlooked in presidential races.

"The media’s flawed formula for 'electability' has pushed aside women and candidates of color," Castro tweeted at the time. "Our party’s diversity is our strength, and it’s a shame that we’re headed for a December debate without a single person of color."

Now, with Castro's departure, the field has become even less diverse, prompting disappointed and frustrated reactions from Americans who want to see a more inclusive race in 2020.