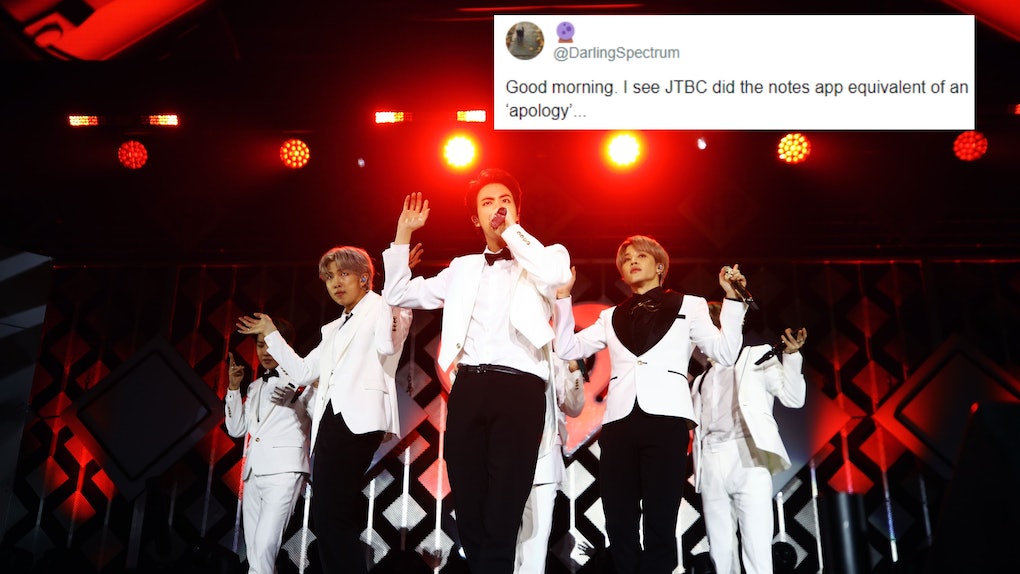 A week after JTBC, a South Korean cable television network and broadcasting company, faced backlash over a misleading report claiming BTS was considering taking legal action against Big Hit Entertainment over possible profit division issues, the network has officially issued its response. It confirmed there was never any legal action taken and acknowledged criticism of their "regrettable" reporting practices. However, many ARMYs feels the company's "apology" is not sufficient and lacks sincerity due to all the damage the initial report caused. These tweets about JTBC's apology to BTS capture ARMYs' mixed feelings about it.

On Dec. 9, JTBC's News Room reported BTS was considering taking legal action against Big Hit over the agency's profit distributions. In response, Big Hit released a lengthy rebuttal, insisting the details of the report were false and that they had CCTV footage of a JTBC reporter entering Big Hit's headquarters without permission. Because of this, Big Hit questioned JTBC's motives for the report and ended their statement by asking for a "sincere apology and response" from the company.

As the BTS ARMY waited for JTBC to acknowledge Big Hit's requests, they trended multiple hashtags boycotting JTBC and even asked BTS to cancel their appearance at the 2020 Golden Disk Awards (which air on JTBC) until they complied.

Well, according to Soompi, on Dec. 16, JTBC aired another episode of News Room, in which JTBC president Son Suk Hee said,

At the beginning of December, JTBC learned that a matter related to BTS had appeared in the internal network of a law firm in Gangnam, Seoul. This matter was in the form of a question as to whether there would be internal conflicts of interest if the law firm were to represent or give consultation to BTS about profit division with Big Hit Entertainment. Considering conflicts of interest are usually part of the procedure for launching a legal dispute. At the time, JTBC consulted several lawyers before reporting that there was a possibility of legal action.

The president expressed regret for filming at Big Hit's headquarters without permission, and said JTBC "accept[s] criticism" of their reporting practices. He said,

But after checking the statements from the parties involved, we have judged that the likelihood of legal action is very low. Big Hit has revealed that they do not have any conflicts with BTS and that they had an exemplary contract renewal last year. BTS has also stated that they did not request a lawsuit from the law firm in question. The law firm in question has stated that they cannot confirm detailed information about their internal network. JTBC expresses regret at the fact that they filmed the agency’s office without permission from Big Hit during the reporting of this case. We also humbly and sincerely accept the criticism that our report was too ahead of itself in reporting on a situation where no legal action had been pursued.

While the BTS ARMY is glad the network acknowledged their reporting was "regrettable," they feel their statement should have come sooner and should have included an explicit apology.

While ARMYs feel like JTBC's apology lacked sincerity, at least the network acknowledged their report was too hasty and clarified that there was never any legal dispute between BTS and Big Hit. ARMYs can go forward and enjoy BTS' appearance at the Golden Disk Awards in peace.