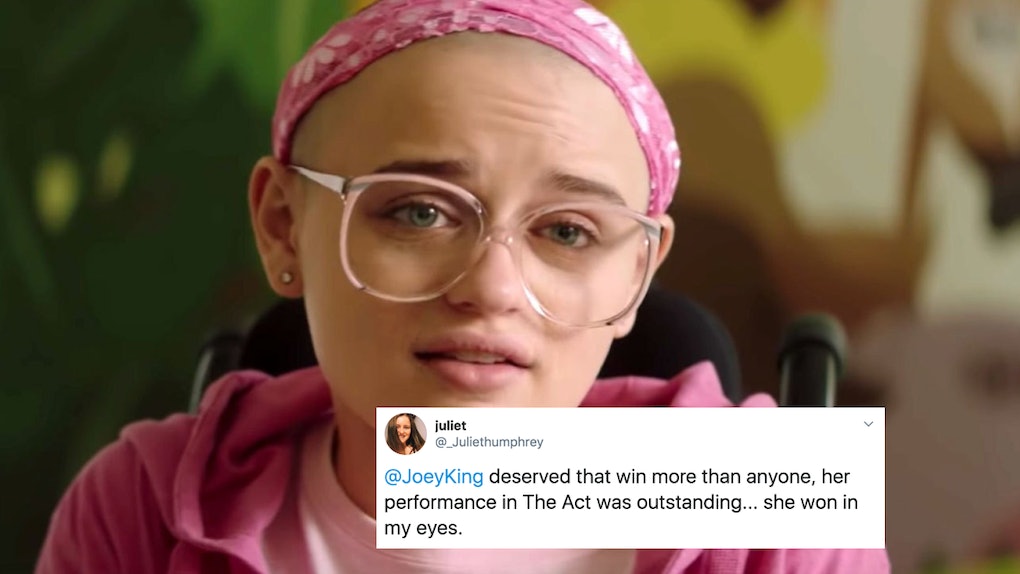 These Tweets About Joey King's 2019 Emmy Snub Will Wreck You

Playing a real-life person is a challenge for any actor, especially when that real-life person has as dark a story as Gypsy Rose Blanchard. But, that was the task at hand for Joey King when she set out to tell the true story of a young woman whose mother's twisted manipulation led to murder in Hulu's The Act. The role earned her a 2019 Emmy nomination for Lead Actress in a Limited Series, but unfortunately she didn't take home the award. These tweets about Joey King's 2019 Emmy snub show just upset fans are for her.

The Act tells the true story of Gypsy Rose and her mother Dee Dee (played by Patricia Arquette) who suffered from Munchausen syndrome by proxy. That meant that she was convinced Gypsy Rose was sick, and forced her daughter to live as a medical patient confined to a wheelchair. Eventually, Gypsy Rose escaped her mother through crimes of her own, all of which is detailed in the Hulu limited series.

In order to play the role of Gypsy Rose, King had to go through some big changes.

"It was a bizarrely enjoyable experience to able to completely strip away all vanity and become Gypsy, so f–k what other people say, I’m proud of myself," King told Us Weekly. "Once I started getting into the headspace of the heavier scenes, the character that I came to know took over me. Once I started going to that place, my character knew what to do.”

King had to go through a lot of emotional and physical work for her role as Gypsy Rose, so some fans are worried that it might not have been worth it for her now that she lost the Emmy:

However, King's fans are showing their full support for her on Twitter. They're making it clear that they're huge fans of her performance no matter what her award count is.

Some fans are worried that they might have played a role in King's loss:

Meanwhile, other fans are still happy for the actor who won the Lead Actress in a Limited Series Emmy: Michelle Williams, for her role as Gwen Verdon on Fosse/Verdon.

Even though King spent months working on her role as Gypsy Rose and was nominated for an Emmy award for playing her, the two of them still haven't interacted in real life yet. King explained to Cosmopolitan:

There were many reasons. I just wasn’t able to get in contact with her number one, but number two, I don’t know… I was portraying the story of somebody, and the story was based on a lot of truth, but there were a few creative liberties. But my important thing was being able to tell the story as truthfully and as correct to the public as possible.

King clearly put a lot into her performance for The Act, so it's a shame she didn't win. Hopefully King will have many more nominations and opportunities to win in the future.